Birdhouse on Hennepin, Stewart and Heidi Woodman’s new organic/sustainable restaurant, opened very quietly last week in the former Duplex space at 2516 Hennepin Ave. Minneapolis. I stopped by for the press sneak preview on Thursday, and then returned for brunch a couple of days later. I like what I have tasted so far, and I like the concept. The Woodmans (Woodmen?) aren’t the first chefs in town to embrace the idea of local and sustainable, but in their new restaurant they are also featuring an approach to menu design that embodies the wisdom of Michael Pollan:

“Eat food, not too much, mostly plants.”

That means designing dishes that are plant based, with meat or other animal protein as an option. For example, the basic cheese and cracker plate consists of fruit and nuts, pickles and mustard for $11, with wild boar soppresata as a $6 option. The farro salad with leeks and peas and sheeps milk skyr (yogurt) is a complete dish at $6, but you can add leg of lamb for $5 more.

The only meat-centered dish on the lunch/brunch menu — at least so far — is a roasted chicken sandwich ($10), with arugula, goat cheese and fig jam.

It’s a bold move, in a market where meat still rules. (Contrast with the current menu at Heidi’s, which offers one meatless entree, one meatless appetizer, and no vegetarian hors d’oeuvres.) 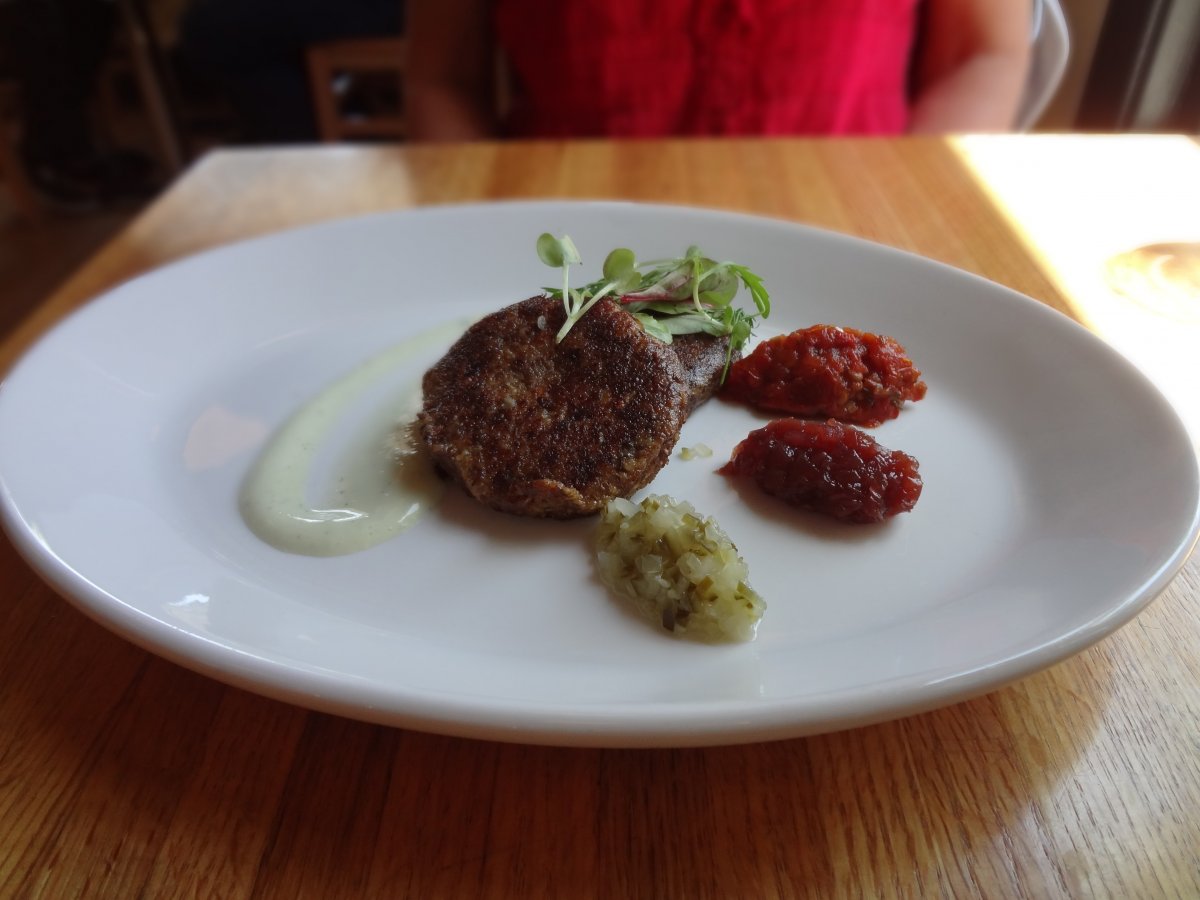 But the other daring move is portion size. When we went for brunch, Carol ordered the quinoa and wild rice croquettes ($10), and I chose the subterranean vegetable hash of potatoes, parsnips, carrots and onions ($9), topped with a couple of fried eggs ($2 extra). Both were served in petite portions — and without bread or toast.

After our lunch, Bird House chef Ben Mauk (Minneapolis native, CIA grad) stopped by our table and asked how we enjoyed our meals. Carol confided, hesitantly, that she expected her croquettes to have more texture – traditionally, croquettes (from the French croquer, to crunch) are breaded and deep fried, but these had the texture of a bean patty. I said that I enjoyed my root vegetable hash so much that I wished there had been more of it. 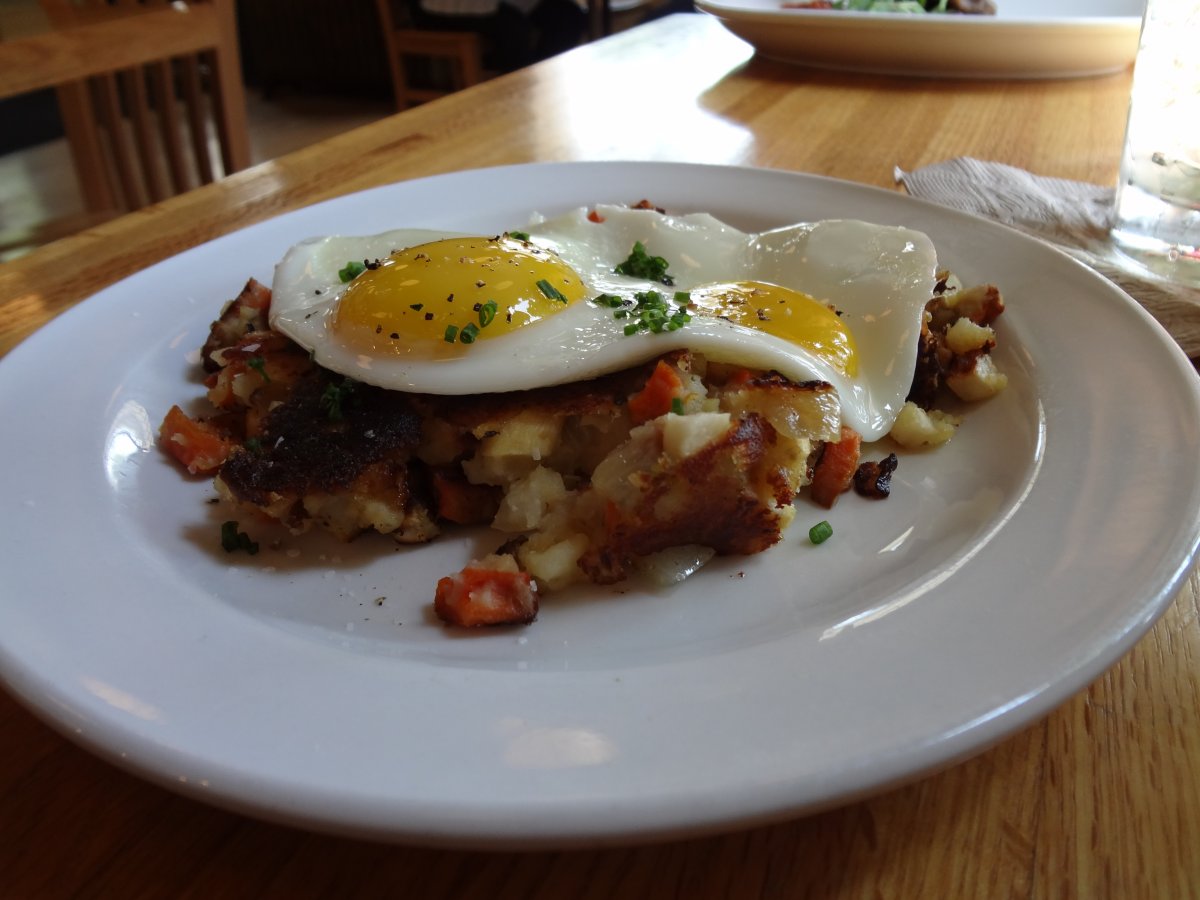 It turns out that small portions are a matter of policy. On his lively and entertaining Shefzilla blog, Stewart Woodman declares his commitment to sustainability:

The sustainability model means that we are spending a lot of time and energy considering every detail, every menu item, every aspect of the operation in terms of how it will operate, what efficiencies, what ingredients, which purveyors will be used and why.

Sustainability also refers to the type of food served, and the portion size. The food must be healthy, and not only delicious. Portions must be consistent with a sustainable calorie count.  We are perfectly prepared to summarily dismiss the complaints from folks that would rather eat until their pants burst…

I applaud the Woodmans’ bold stand against waste. In my years of experience surveying the local restaurant scene, portion size ranks right up there with convenient parking as a predictor of restaurant success. I blame the chains (think Cheesecake Factory) for popularizing absurdly large portions — when you are serving factory food, it’s a cheap way of enhancing the customer’s sense of perceived value and justifying higher prices. And it’s also very wasteful.

That said, portions could be more generous. Otherwise, I was pleased with almost everything I have tasted so far – everything seemed fresh and flavorful, from the chicken sandwich to the sweet pea pate with goat cheese and mint ($8). I’ll be eager to see the dinner menu, to be revealed when Birdhouse has its grand opening on Thursday, June 21. 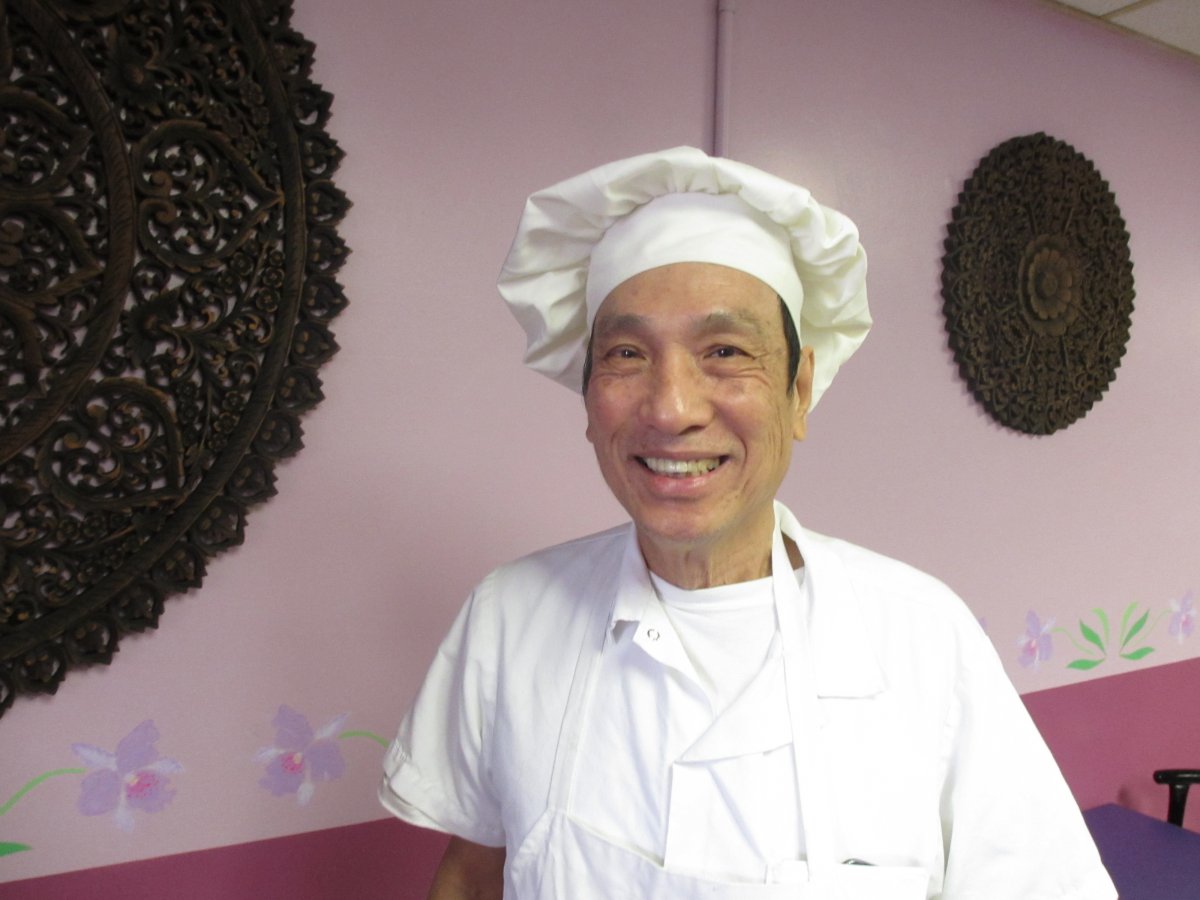 A little rush of nostalgia hit me when I walked into the new Royal Orchid at 4022 Central Ave. in Columbia Heights. Mounted on the wall near the door was a review that I wrote back in 1988, soon after the original Royal Orchid opened at 18th and Nicollet, as one of the Twin Cities’ first Thai restaurants. In the review I praised the authentic Thai cuisine, but worried that if it became too popular, the kitchen crew would have difficulty maintaining their high standards. Next to it was an equally enthusiastic review by Carla Waldemar, which appeared in the now-defunct Twin Cities Reader later that same year. And nearby, a 1994 award from Mpls.St. Paul magazine for best Thai restaurant.

The Royal Orchid has had its struggles and triumphs over the years. In 1999 the Nicollet Avenue restaurant closed, and reopened a year later in Roseville. where it operated for a decade. Another, fast-service Royal Orchid opened in the Minneapolis Skyway system in 2004, and closed earlier this year. The restaurants were originally operated by the brother and sister team of Pat and Nida, but Nida retired a few years ago. Pat also tried to retire, and turn the Skyway restaurant over to his sons, but now he’s back at work in the kitchen at the new Columbia Heights location.

Much has changed in the decades since the Royal Orchid first opened. Dozens of Thai restaurants have opened since then. One of the best and most innovative of the new generation, Sen Yai Sen Lek, opened a few years ago at 2422 Central, highlighting authentic preparations and the use of locally grown, sustainably produced ingredients, and an interesting beer and wine list. Another Thai restaurant, Karta Thai, opened a couple of weeks ago almost across the street from Sen Yai Sen Lek, at 2411 Central Ave. St. Paul’s popular Bangkok Thai Deli, probably the most authentic Thai dining experience in the Twin Cities, has opened a branch on Eat Street, Kruangthep Thai.

The new Royal Orchid seems like an attempt to capture a bit of the spirit of the original Eat Street location, as the welcome page of the Royal Orchid website explains:

We’re not new.  We’ve been here for quite a while, over 20 years, and when we started out in Minneapolis on 18th &amp; Nicollet, we had a focus on authentic Thai cuisines.  Throughout the years, we’ve lost some of that focus and some dishes have become “Americanized”.  We’ve read the reviews, and some weren’t pretty.  In that regard, we’re are going to refocus our efforts on making things as authentic as possible but we’re also going to introduce new items of our own creations with a Thai twist to them.  So for those that have been to our location in Roseville, don’t be surprised the food takes a little bit longer.  With that in mind, welcome to the new Royal Orchid in Columbia Heights! 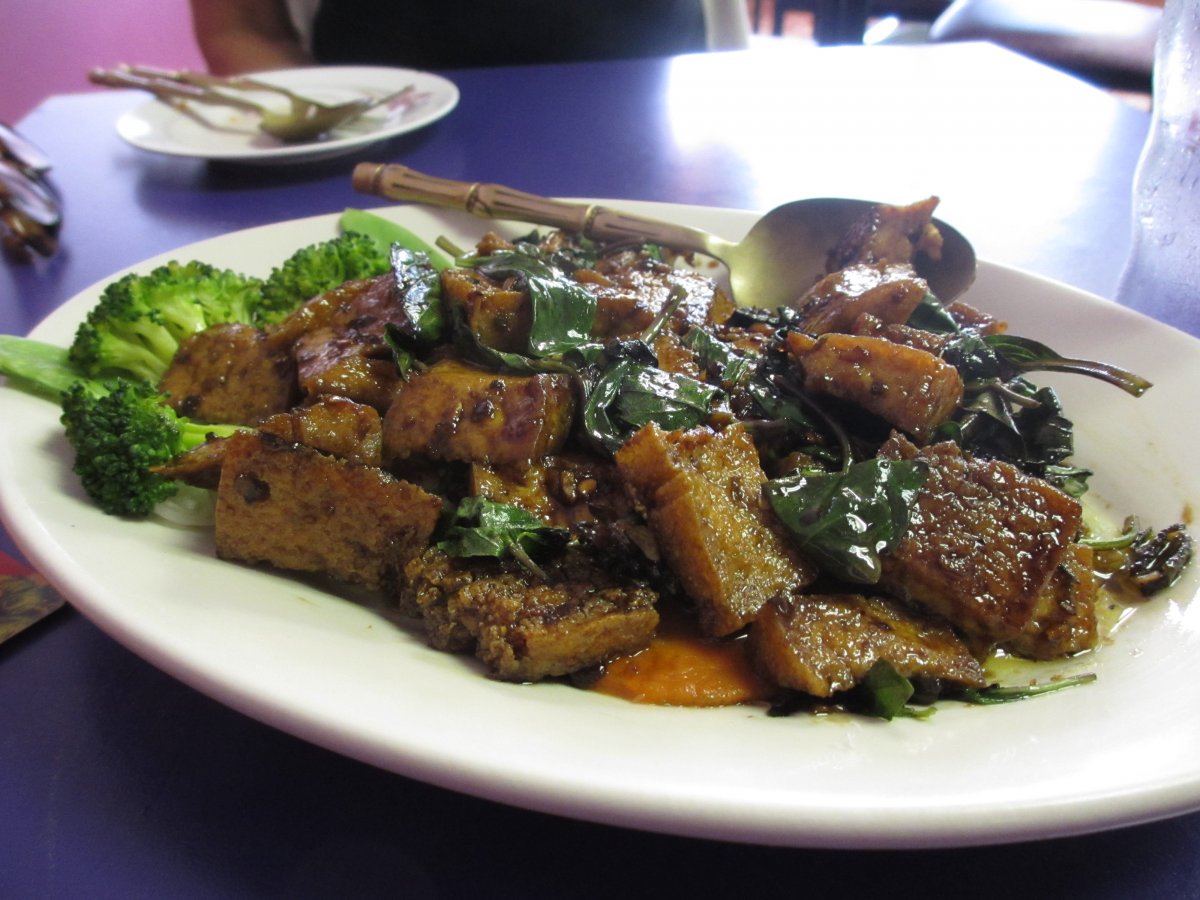 We stopped by on a Saturday around lunchtime, and sampled only a few of the dishes. The tom yum soup was faithful to the spirit of the popular hot and sour soup, but seemed a bit simplified — sliced button mushrooms instead of the more traditional straw mushrooms, and flavored with lemongrass, but with little trace of other traditional ingredients, such as galangal or kaffir lime. Similarly, the som tom salad, prepared with unripe papaya, Thai chilies, fish sauce and lime juice captured the hot, spicy and pungent spirit of this traditional dish but pared away some of its complexity. That pattern carried through to the third dish I sampled — an entree of tofu stirfried with holy basil. We couldn’t find the chilies promised by the menu, but the dish was lively and flavorful, and prepared with generous quantities of deep-fried tofu.

It probably isn’t fair to compare Royal Orchid to the most sophisticated of the new generation of Thai restaurants, but it still has its charms — low prices, big portions, and the warmth of chef-owner Pat. As a sideline, Pat has started baking caramel cinnamon pecan sticky rolls, which he promises are “unlike any you have ever tasted.” He makes them every few days, and sells them for $2.50. I’d gladly go back to Royal Orchid, next time I am in the neighborhood, but I am especially eager to try those cinnamon rolls. Best to call ahead and see if he has any for sale: (763)789-9999.