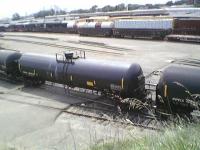 Each week about fifty oil trains, each carrying more than 1 million gallons of North Dakota crude oil, pass through Minnesota. Almost all of them go through the Twin Cities. This revelation comes from previously confidential reports on the state’s crude-by-rail traffic that were recently obtained by the Star Tribune. The documents reveal that oil trains can be more than 100 tank cars long as they pass through 39 of the state’s 87 counties. The greatest concentration is on the Burlington Northern Santa Fe Railway main line between Moorhead and the Twin Cities. [Audio below]

The Huffington Post reports that most oil is shipped in what’s been called “the Ford Pinto of rail cars”—a tank car whose safety flaws have been known for more than two decades. The DOT- One Eleven tank car was designed in the 1960s. Its safety flaws were pointed out in the early ’90s, but more than 200,000 are still in service.

While the rail industry has voluntarily rolled out about 14,000 stronger tank cars, about 78,000 of the older DOT- one elevens remain in service. Retrofitting them would cost an estimated $1 billion.

New regulations have been proposed by the Federal Department of Transportation. Those rules are now open for public comment at regulations.gov.

In late July the environmental non-profit MN350 gathered with state legislators and neighborhood residents near the rail yards in northeast Minneapolis to call attention to the safety risks posed by oil trains in populated areas.