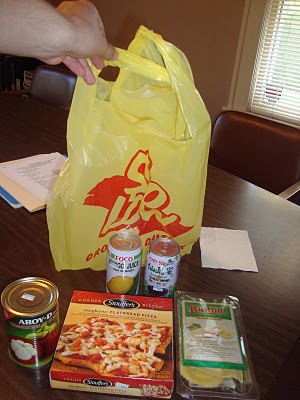 As I prepared to blog the night away, I knew I needed to grab something to eat to keep me full. I went over to So Low Grocery Outlet on N. Emerson Avenue, and once again I was not disappointed. The place had the air conditioning on at full tilt, for one thing, making me almost forget it’s 94 degrees out there. They sell ice cream drumsticks for a buck as well. And Bill Withers is on maximum rotation. And the staff, mostly people who appear to be in their 20s or younger, are always extraordinarily polite. They’ll even take your bags out to the car if you have a full load.

Next up, canned mangosteens. Do you know how hard it is to find mangosteens? So Low has them on a regular basis. These were the highest-priced item, ringing in at a whopping $2.49.

For a mere 99 cents, I picked up a frozen pizza that was impressively good, and in case that wouldn’t be filling enough for all the night’s festivities, another buck got me some rather delicious pasta.

The grand total, including the ice cream drummy not shown: $7.14. So when you see tonight’s series of posts, you can thank not only the Hawthorne Hawkman and the Johnny Northside blog, but also So Low!