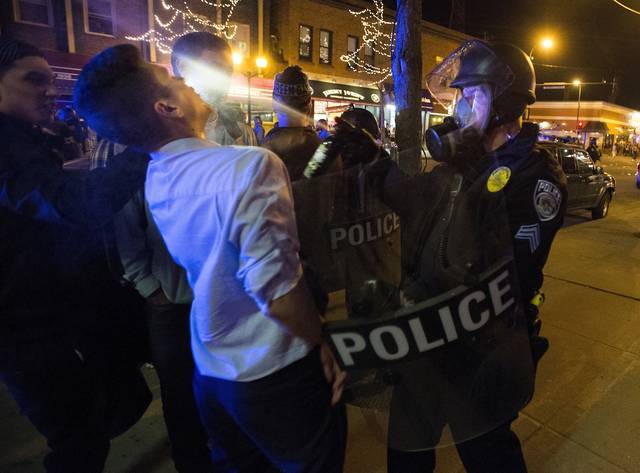 A last-second goal from the Gophers men’s hockey team Thursday night sent Dinkytown into a three-hour frenzy as hundreds of rowdy people flooded the streets following the semifinal win.

Riot-gear clad Minneapolis and University of Minnesota police and National Guard were there to meet them, lining up and starting to clear the streets soon after it started.

“The actions of a few people in Dinkytown last night unfortunately marred the victory of our Gopher men’s hockey team,” President Eric Kaler wrote in an email to students on Friday afternoon.

“These actions are unacceptable and must not be repeated.”

Thursday night was just the semifinal.

The Gophers will take on Union in the NCAA final Saturday. That game, like Thursday’s, will be played in Philadelphia and the Gophers should be favored.

“It’s the semifinals, so I have no idea what to expect for the finals,” said University architectural design junior Jeff Wilson, who came to Dinkytown from his Stadium Village apartment to watch.

Kaler wrote in his email that any destructive behavior will be met with “zero tolerance.”

“We’re not discussing any of our plans or procedures for Saturday, just for safety reasons,” said Minneapolis police spokesman John Elder.

“We developed the plan with the Minneapolis police department and it’s been our responsibility,” University police chief Greg Hestness said. “We’ve been working on it for six weeks to two months when the Gophers started looking good. We’ve done it previous years.”

Officials arrested 10 University students. All but one were released as of early Friday afternoon, and most posted a $78 bail, according to the Hennepin County Sheriff’s jail roster.

“It was the violent behavior towards other people and towards officers and the damage to property,” Elder said.

Two Minneapolis police officers were taken to Hennepin County Medical Center for medical attention. Most of the arrests were for unlawful assembly, some for disorderly conduct and one for public urination.

When three or more people gather with intent to disturb the peace or break laws, it’s considered unlawful assembly, according to Minnesota statute.

Once declared, police can arrest students for not complying. Under the Student Conduct Code, punishments could include a warning statement, expulsion or revocation of a degree.

“Just being present and watching a riot is, in itself, violation of the Student Conduct Code,” Kaler wrote.

Minneapolis police sent a press release Friday stating that anyone told to disperse from an assembly that has been declared unlawful must immediately leave the area, and failure to do so may result in an arrest.

Minnesota senior defenseman Jake Parenteau said it’s important to note the team is still one win away from the title and fans should celebrate in a responsible way.

“We haven’t won the whole thing yet,” he said.

Just after 11 p.m., a few people began climbing a light pole near the intersection of 4th Street and 14th Avenue Southeast as a large mob swelled, with some trying to flip a police car, shooting off bottle rockets and crowd-surfing.

Police began using tear gas around 11:15 p.m. and some people remained on the scene into the early hours of Friday morning. A State Patrol helicopter flew overhead, watching the area until around midnight.

Phil Cross, a criminology senior and Espresso Royale barista, said he had to choose between tending to customers and people outside.

“I know tear gas is probably extremely painful, but I didn’t feel like there was a whole lot I could do for them,” he said.

He had a bowl of water ready for anyone sprayed with the chemical.

In more than a year at the coffee shop, Cross said he’s never seen Dinkytown streets so out of hand.

Cross said he thought it was unfortunate that most of the crowd didn’t appear to take police seriously.

University psychology student Shaili Zappa said she watched a man on rollerblades in front of the Library Bar get stopped by officers, put in a headlock and escorted into a squad car.

“He wasn’t really doing anything bad at all,” she said.

“I think fans should enjoy themselves,” he said, “but that doesn’t have to come at the [expense] of other people’s safety or the city or the area itself.”