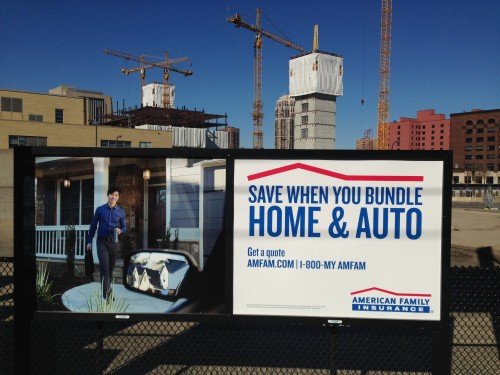 If you hang around the Downtown East/ex-Metrodome Station for a few minutes while waiting for the train, you might begin to notice the advertising saturating the platform . It’s hard to miss, in part because it’s literally on every flat thing, and in part because it’s so incongruous, because it’s all about cars and suburban life.

It makes some sense that American Family Insurance (the advertiser) would want to market their product by reminding people of what they could stand to lose—and thus what they might want to get insured. It also makes some sense that AFI would decide to target downtown commuters, presumably taking the Blue Line to Park and Ride lots. But their campaign is so startlingly out of sync with the urban environment around the station, it makes you wonder just how exactly it was planned. Why this, why here? A young, dress-shirted Asian man, coffee in hand, heads out to his car. The rear view mirror shows that he lives in a development of nearly identical white houses. Other photos with the same actors show his wife dutifully waving from the front door. A man washes/waxes his classic car. A young couple excitedly throws camping gear into the car in front of their wood-chip landscaped home.

Not pictured, but equally weird:

– A woman stares at her rugged, bearded husband/boyfriend as he drives his car.

– A man leans against the back of his car.

– A woman letting her children out of an SUV to go to soccer practice.

When you’re on the platform take a look at the people waiting for the train. When you get on, see who’s riding. Are they the people toward whom these ads are aimed?