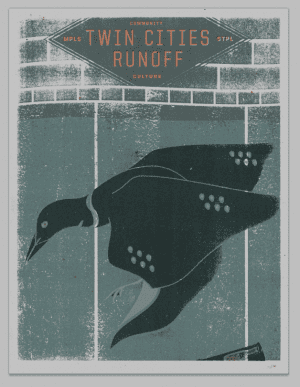 It’s the time of year when Minnesota twirls around in a fury before settling on its haunches to create its Black Swan-esque representation of the darkest, coldest months. In preparation for the covert winterlong nesting process, we pick at our problems, molt away the unnecessary ones, and forget our habits entirely, only to wake up in the feathered haze of a daylong snowstorm that keeps us locked in and self-aware for the rest of the winter.

So, let’s look away from ourselves, erring city people that we are, and turn our heads to those who are used to watching the migrators. No, I’m not talking about those who work at arts nonprofits who keep an eye on the project-based freelance—I’m talking about those who stoke a Minnesota tradition that has to be older than community development: bird-watching.

This month, in the community papers surveyed for this segment, there were four bird-watching columns, and because news judgment is entirely subjective, this month’s Community News Roundup will be examined first through the lens of the ornithological observers.

The undisputed leader in local birdwatching journalism—largely because anything that happens in South Minneapolis always seems universally representative of our pedestrian yet progressive nature in the metro area as a whole—is John Karrigan’s Powderhorn Birdwatch. This month, Birdwatch reports on a glut of toads, which are evidently more prevalent than birds at this time of year. “There was another good toad night recently and there are probably a lot of good toad nights ahead,” writes Karrigan, reminding us to get out of our air-minded myopia and take a look and a listen to the ground once in a while. We were expecting community news, and then we got birds, and toads.

Writing about birdwatching is wholly subjective; all you can write about is what you’ve seen, and there’s no way to confirm or check facts. If you write about bird-watching with your nose too high in the air, your style becomes laden with trite avian metaphors (see above), so it’s important to keep the personal “I” while writing about birds. After listing tidbits about butterflies and Canada geese, Karrigan writes, “I saw a flock of at least 50 Nashville Warblers. They were very active and hard to see while trying to identify them. I saw one of the young Cooper’s Hawks make a pass at them but I think that he or she was just practicing and wanted larger birds.”

In one of the newsiest years in recent memory, among the global warming and the world revolutions and the budget crises and all that we’ve been obsessing about, the birds are just being birds. You could say that the birds are the 99 percent occupying the sky or the ground (Karrigan doesn’t specify) and the hawk is like the 1 percent, but the birds are what they are, no matter what devices or meaning you’ve attached to them.

Case in point: in the Community Reporter’s brief birding column, Birds in Particular, the hawks reappear, with quite a different outcome. Hallie O’Falvey writes,

The other day I was standing in my side porch, looking out, when I saw a rush of dreaded English sparrows fly into the bridal veil bush. A Cooper’s hawk flew out of the bush with an English sparrow in [its] talons. I blinked in astonishment. It was like, what just happened? I did not see the Cooper’s hawk fly into the bush. It took a moment for my brain to register what my eyes had just witnessed, as I watched the hawk land on my neighbors’ roof.

I wouldn’t want this scenario to be a metaphor for any pro-democratic protest, although it has, historically. Regardless of metaphor, Cooper’s hawks behave in the same way whether they’re staring at sparrows or waiting for warblers. Every birder puts himself or herself into the situation differently, but nature will act in the same patterns—which is why there’s no birding column in the Star Tribune or the Pioneer Press. Patterns aren’t important to a newsman—or at least not the ones in the natural world—and news is about people, most of the time.

But our writing styles fall into analogous formats, no matter what the subject matter is. The Park Bugle’s birding columnist, Clay Christensen (or, The Birdman of Lauderdale), takes a more focused approach this month, chronicling misconceptions of the mourning dove. “I’ve always considered the mourning dove a rather stupid—and stupid-looking—bird. I couldn’t imagine how that tiny head could contain enough brains for a bird that large. It reminded me of a dinosaur: all body, little head,” Christensen leads. In an examination whose depth rivals a New Yorker profile, the column describes the mourning dove’s complex feeding process, which involves “milk” it produces through the “crop” on its esophagus, its impressive flavor that inspires action in hunters, its fragility in inclement weather, and its ability to drink from a bird bath like a horse in a trough. This lesson in bird tolerance concludes, “Mourning doves are unique critters, living rather tough lives. So, I encourage you to join me in adopting a new attitude toward them, treating the doves with a little higher regard and respect.” Every good profile should end in respect.

And in the Camden News, Carol McElroy’s explication of migration reminds us that the birds are leaving us, which all of us may have noticed over the course of the past two weeks with the preponderance of Canada geese with Hawaiian shirts and valises at every park and intersection in the Twin Cities. But, McElroy reminds us that they’re not just leaving because it was summer and then two weeks later we got flurries. They’re leaving because they’re hungry, and they’re not happy about it:

There is little joy for the avian participants of great migrations. The journey is dangerous and many birds die. Cell phone towers, storms, predators and city lights all contribute to the many hazards birds face when flying great distances…

All of these things that improve our lives—the underlying structures of lighting and communication that we discuss repeatedly in community media, our improvements and the things we don’t think much about—continue to affect the lives of animals. I mean, we do think about them, in their allotted space, the time we take for talking about greening, but we don’t, really. Even if you’re a staunch animal rights activist, when’s the last time you thought about how your cell phone use affects bird migration? And even if you don’t care in the least about what happens to the environment, you still notice the geese when they’re in your way.

If you’ve come with me this far—that is 1100 words about bird-watching columns above my cursor at this point—you may be anxious to get to the real community news, or you may stop
and wonder if this content is sponsored by The Big Year (it’s not; I just heard of the movie as I was writing this column, and I like Steve Martin but I’m really wary), or if I’m going to tell you how birds taught me to love, I’m not. I was just intrigued by how four community news columns about birds could be so radically different, well written, and endearing. This column isn’t just about community news; it’s about why our community newspapers still exist.

Here are a few links… for the birds:

In Community News Roundup, Twin Cities Runoff collects and reviews about 40 community, religious, and ethnic newspapers throughout the Twin Cities, aggregating the most relevant links and discussing outstanding themes. Generally, included stories are directly related to community affairs in Minneapolis and St. Paul and of potential interest to residents of the whole metro area, rather than just a neighborhood. We include items that reflect ongoing news, rather than profiles of local businesses or past community events. This column was suggested by University of Minnesota PhD student Meagan Manning and runs the third Thursday of every month.