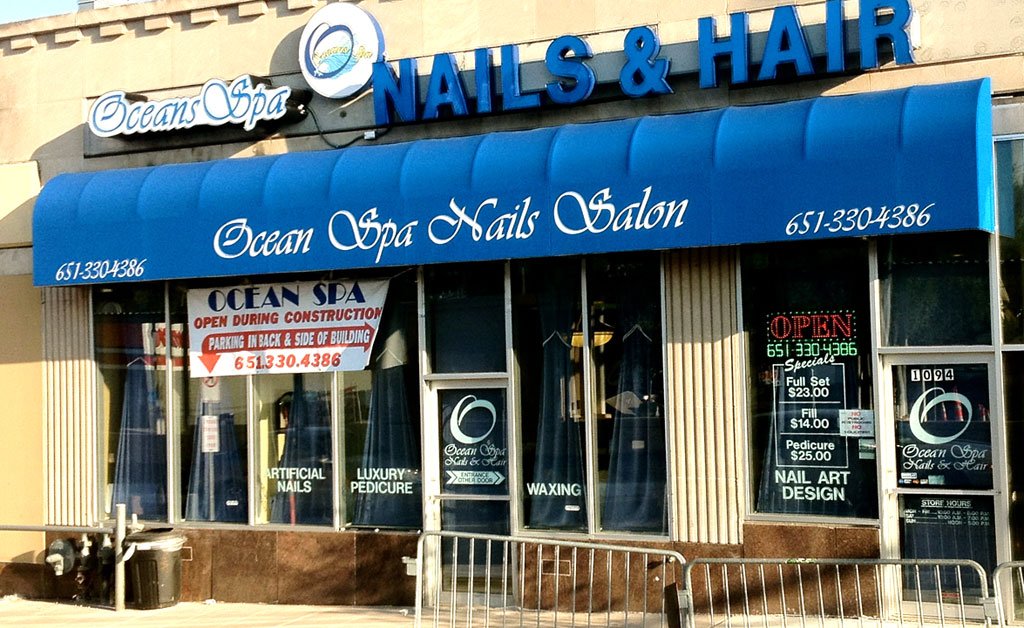 I was feeling drab one Saturday afternoon in my Midway neighborhood. After a week of nine-to-six computer work in a cubicle and a morning of ticking off the weekly chores, laundry, groceries, scrubbing a few floors, and carting my teen around, what I needed was a pick-me-up. A look at my grubby nails confirmed where I knew I had to go to escape the routine of the dark days of November that were seeping into December and dragging me along.

I decided to take a walk on the gritty side of University and Lexington avenues, past the van selling knock-off designer bags and away from the smells of fried KFC grease. Sandwiched between the busy twenty-four-hour check-cashing business and the brown concrete City Church that saves souls of the down and out, I found the door.

The first thing to notice about the door is the light. The pastels of the white-laced windows make it glow. I pushed it open and entered into the spacious and seemingly floating oasis called Ocean Spa Nails Salon. Quickly, I seemed to glide, away from the grim tones of the street and into the first softly lit pink chamber devoted to hand care.

There was a rush to welcome me and someone took my heavy coat. Another inquired about my wishes, and then instructed me to pick out a color from among the hundreds of sparkling and matte hues of the rainbow. This was going to be so fun! I browsed the bold golds, ruby reds, and ice blues. I finally decided on royal magenta.

My next step led me past the aquarium filled with electric blue and yellow fish and the coral-hued nail stations, and deeper into the blue-green, coral, and abalone spa to find my mega-cushiony, throne-like pedicure chair.

I slipped my bared feet into the warm, bubbling blue footbath, selected the combo massage setting on the chair remote, and settled into my role as queen of the sea while my attendant offered me a de- lightful hour of pampered care—foot bath, massage, skin-shedding. All the dead cells from the millions of steps I had taken up to that point were stripped away.

I wondered about the woman who knelt at my feet, efficiently trimming each toenail, and hoped that someone did this for her when she felt the need for some spirit-lifting. Life can make people grow calloused, and we pass each other on the street with indifference. Here was an act of compassion—softening and soothing. Maybe saving souls is as simple as this.

I melted into the moment, forgetting all about the harshness of the outside world, lulled by the shushing Vietnamese tune playing in the background and the gurgling water of the spa. When I next looked down, I saw that my toes were like shiny little gems. I was beautiful! I put on my socks and boots and floated out to University Avenue, bringing color to the avenue with every light and regal step I took.

Patricia Teefy grew up in Minneapolis and lived in sunny California for seventeen years and other splashy places around the world before happily settling in the Midway neighborhood in the city across the river! She loves her community of diverse and unexpected gems, like the nail salon that made her a Saint Paul convert.