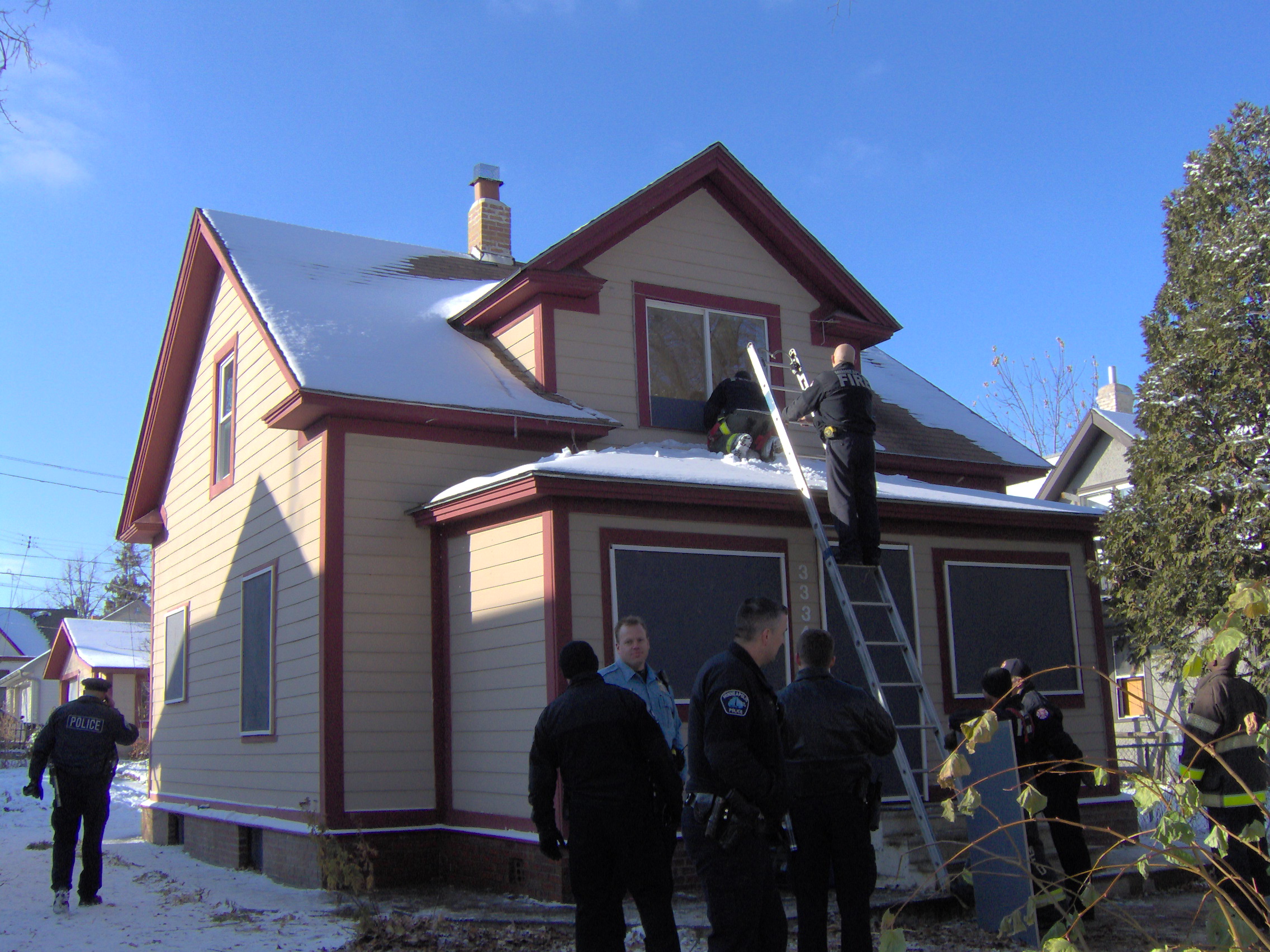 Minneapolis firefighters board up the house after protesters were evicted on November 20.

The number of OccupyMN protesters sleeping in the downtown Government Plaza, which they call the People’s Plaza, dropped in recent days from around 15 to closer to five. One protestor said, “ Our numbers dwindled because we’ve had people split up,” referring to the foreclosed home occupations. Other protestors come during the day. The kitchen continues to serve food, general assemblies are still at seven every evening, and there are several rallies a week.

Policies that Hennepin County adopted to clamp down on protesters have been largely unenforced, said occupier Nathan Thompson. Occupier David Cummer said that security officers have even been helpful. Cummer said one day a man unknown to the occupiers started pouring paint on the plaza and heckling protesters. Activists told police on the plaza, and the police removed him.

On the night of November 19, though, OccupyMN had a run-in with security forces. On that night, security officers issued trespass notices to eight of demonstrators staying at the plaza. Ben Egerman said a group of drunk people had antagonized the occupiers, starting an altercation which led to the trespass notices.

Thompson said he continues to occupy the plaza because, “This is a diverse movement. It is important for us to have a place where people can show up and see what is going on.” Indeed, as we spoke, a woman and her teenage daughter walked up and said they came by to learn what OccupyMN was all about.

As OccupyMN continues to look for more foreclosed homes to occupy, activist Ben Egerman said they will be “taking action against US Bank for kicking people out of their homes.” He did not explain what action was planned.

OccupyMN moved into a home in South Minneapolis November 19, demanding that US Bank renegotiate Sara Kaiser’s mortgage so she could keep her home.  Kaiser and her daughter had lived in the South Minneapolis home. US Bank foreclosed on Kaiser, and she moved out of the house before the occupation. Kaiser is a lecturer in anthropology at the University of Minnesota. A third party signed a purchase order to buy the home, but it was vacant when protesters moved in on November 19.

A few hours after the south Minneapolis occupation began on November 19, Minneapolis police arrived and threatened arrest for anyone who stayed in the house. Only Anthony Bounds, 19, decided to stay, and he was booked for trespassing and burglary.

When the squad car holding Bounds tried to drive away, Devin Wynn-Shemenak stood in front it. Video from OccupyMN’s Livestream shows that as the car moved, it pushed him about 15 feet down the street before the police stopped, got out, arrested him. He is charged with obstructing a legal process according to the Hennepin County Sheriff’s jail roster.

Then police tried to board up the house, but over 100 protesters linked arms around the house to prevent them. One occupier added that when the boards for the windows were set down, someone took them away so the boards could not be used on the house. Once deterred, police left the scene and protesters reoccupied the home, and around 30 people stayed for the night.

The occupation ended on November 20 when police and fire-fighters arrived in the early afternoon. Police kicked the door open and threatened to arrest the ten occupiers for trespassing. The demonstrators filed out, and firefighters boarded up the house so no one could get back inside. Protesters continued to picket on the side walk, chanting, “US Bank how many homes did you seal today?”

Police released Bounds and Wynn-Shemanak the evening of November 20 after they posted bail of $300 each.

In North Minneapolis, OccupyMN has been occupying the foreclosed home of Monique White since November 8. The occupiers demand that US Bank renegotiate its mortgage with White so her family can stay in the home. As of November 21, White said she had not received any communication from US Bank since the occupation started.

Egerman has been involved in that occupation and said that between ten and 30 activists have occupied the home since it began. They also hold barbeques on Sundays to initiate community forums, and have been canvassing the neighborhood for support. “The response from the neighborhood has been enthusiastic,” Egerman said, “People have stopped by that know someone going through foreclosure and want to talk about how we can work together.” OccupyMN activists have said they plan to occupy more foreclosed homes.