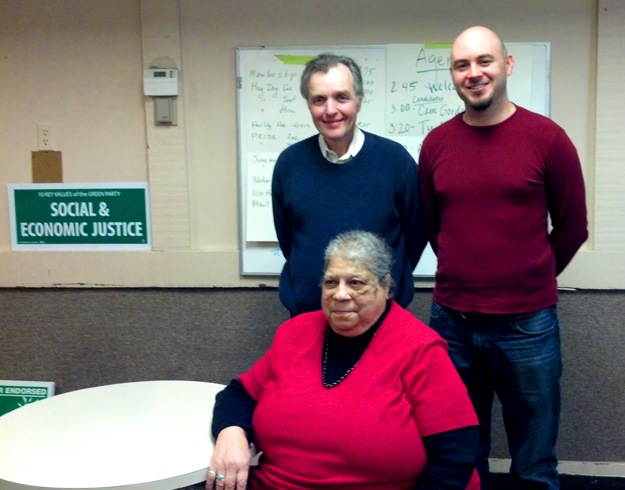 Over 25 people showed up at New Faith Baptist Church on 42nd and Cedar, to listen to the candidates speak and vote for whether or not the candidates would receive Green Party endorsement. Both Gordon and Young are running for re-election in November, and many members at the convention expressed their deepest approval of the two incumbents.

Young, who is in her sixth term as Park-Commissioner, spoke of her work surrounding urban agriculture, for which she has been pushing for five years. She also spoke out against the Keystone Pipeline, saying her work now lies with the protesters.

“I have been invigorated by seeing uprisings all over the world, as we try to make things right,” said Young during her speech. “I believe it’s not about going over the fiscal cliff, I actually think we’re going over the environmental cliff.”

Gordon, who is running for his third term in Ward 2 City Council, spoke of his many accomplishments since he was first elected back in 2005, such as passing the Commercial Recycling Ordinance back in 2011, which requires commercial properties to recycle.

Official candidacy won’t be announced until August 15, and neither Gordon or Young know just who they may be running against, if anyone at all. However, with Young’s track record and with Gordon recently receiving the Green Party’s as well as labor endorsements, it may be smooth sailing for the two.

As for Ty Moore, his biggest threat in the race is Alondra Cano, who is hoping for DFL endorsement.

During his speech at the Green Party endorsement convention, Moore admitted that he believes winning Ward 9 is a slim chance.

However, Moore’s campaign is less about winning the City Council seat than about creating a powerful movement, he said, using phrases popularized by Occupy Wall Street.

“For us, winning is much bigger than this one office, than this one election,” said Moore. “We want to see political power transferred from the one percent in Minneapolis, to the 99 percent. The ordinary people.”

Moore has been a longtime supporter of the Occupy movement, as an organizer with Occupy Homes since 2011 and as a member of Socialist Alternative since 1998. Moore believes his most active support will come from these two organizations, he said.

Moore, at 35, expects diverse support from his community, but understands that Occupy has a strong youth base and hopes to get support from that base.

Both Moore and Cano are running on very similar platforms, calling for immigration and women’s rights, environmental sustainability and a focus on local growth and support.

However, according to Moore, their differences aren’t necessarily why they win, but how they win.

“I think the Democratic Party nationally, and locally, fundamentally serves the interest of Big Business, of Wall Street,” said Moore. “I think to the degree they base their political careers on winning favor of the Democratic Party… they end up being compelled to compromise on the interests of their constituents, and I think the Green Party is not tied to Big Business,” he continued. “[The Green Party] brings together very well intentioned people that win because of debates they have in the community, not because of support from Big Business.”

Moore says he respects Cano’s work, but that her ties to the DFL will undermine her ability to govern in favor of the people.

Having just won the Green Party’s endorsement, and with elections not until November, Moore’s campaign is just getting started, and he hopes that this endorsement will be the first of many — he said he has the endorsement of the Socialist Alternative, and is still waiting on endorsements from Occupy Homes and labor unions. His campaign kickoff is on March 9, at the Mayday Cafe in South Minneapolis.

CORRECTION 2/20/2013: References to Labor Party endorsements were incorrect: the references should have been to endorsements by labor unions.