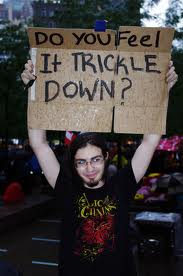 While the Occupy movement was launched in New York City, one index of its contagiously popular appeal is the appearance of Occupiers in places like Rochester, Duluth and Brainerd.

In our area, some locals are gathering to learn more about organizing a protest in Rochester.

It may not be Wall Street, but for folks in Rochester, Aeus Auto Repair is serving as a meeting ground for those wanting in on the Occupy Wall Street movement.

“I was investigating the Occupy Minneapolis which started up last week, planning on probably going up there, but I saw there wasn’t anything going on in Rochester yet,” said Zane Zodrow.

“We’re tired of politics being driven one hundred percent by money and not by principle and what the American public wants,” Zodrow said.

According to the group’s Facebook page, the first protest and general assembly will be held in Rochester’s Peace Plaza on Sunday from 2:00 p.m. to 5:00 p.m.

In Duluth and Brainerd, the Occupants have already staged demonstrations. The Duluth Tribune reports in ‘Occupy’ movement reaches Duluth:

Almost 100 Northlanders gathered at Lake Superior Plaza in Duluth on Wednesday to add their voices to the growing national unrest over the U.S. economy and the role of Wall Street and banking interests.

Chanting “they got a bailout, we got sold out” and “we are the 99 percent,” the protesters gathered under the banner of Occupy Duluth at what was officially declared Wednesday to be a public plaza at the corner of Lake Avenue and Superior Street.

An interesting take from one Occupier:

Anne Fryberger of Duluth, an investment adviser and former broker who has been in the business for 25 years, held a sign saying she supported the Occupy Wall Street objective.

“I’m not against capitalism. I’m against the part of capitalism that can’t get enough and gets more and more by taking it from everyone else,” she said. “The whole system is predatory. I believe the middle class is losing ground in this country and we need to stop it.” . . .

The paper reports that seven Tea Party members showed up to counter protest.

Earlier this week it appeared Wednesday’s rally might be more controversial after Minnesota Power erected No Trespassing signs that claimed much of the plaza, just outside the utility’s corporate headquarters, was private property and that trespassers would be prosecuted.

City officials countered that the city had an easement to the plaza and declared it open for public protests, and the signs came down early Wednesday.

“This is the people’s plaza and it’s open for us to use,” Duluth City Councilor Sharla Gardner said through a bull horn.

Plans are being made for an encampment. Read the whole thing at the News Tribune.

Finally, the Brainerd Dispatch reports in A show of solidarity:

It wasn’t an occupation, but the message from demonstrators Wednesday in front of Brainerd City Hall was clear to corporations and politicians alike: Stop the greed and create jobs.

For an hour and-a-half the crowd of more than 50 people, from teenagers to seniors, stood in the rain along the sidewalk outside city hall and held aloft placards and signs with slogans such as “We are the 99 % who are not millionaires,”“Union strong,” “Create jobs now,”“No is not a solution,” “Don’t destroy the American dream” and “Economic Justice”.

The demonstration, one of many happening this week across the country, was a show of unity for the Occupy Wall Street movement. Every few seconds passing motorists on Laurel or South Fifth streets would honk their horns or give a thumbs up, eliciting cheers from some of the demonstrators. . . .

Read the whole article, as they say.

Photo: Feel the Trickle Down!