I went to Occupy MN Saturday, which marks the start of the second week. I posted video last week after learning how to operate the camera and how to do the most minimal editing. This time … actually I still mucked one up. Anyway, I have more people stating why they’re participating. The purpose is to let people tell their own stories in their own words without potential mischaracterization, like appears to have happened with the protest in the lobby of Wells Fargo last week. One interviewee addresses that.

And there’s a neat photo.

First, the ladies who let me interrupt their lunch:

Next, someone who participated in the protest at Wells Fargo:

After posting several videos where I asked people what motivated their participation, I asked myself the same question

Finally, how does a good environmentalist know which way is South? 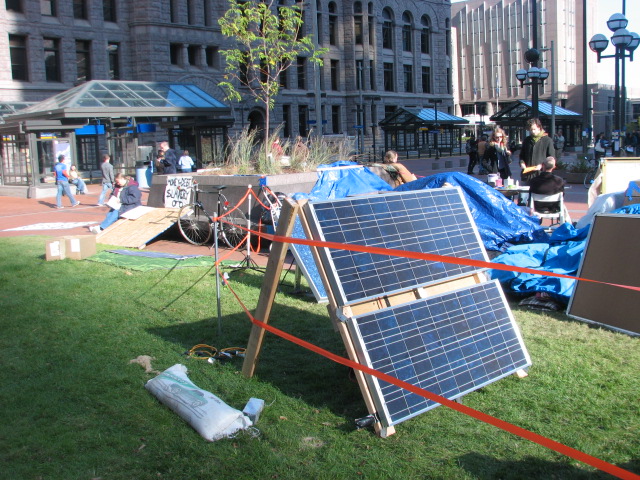 And for an extra bonus (isn’t “extra” bonus redundant? No! Not on Wall Street!) there’s a fun quote from a story on the demonstrations around the country today, from a confused tourist on Times Square:

Sandra Fox, 69, of Baton Rouge, La., stood, confused, on 46th Street with a ticket for “Anything Goes” in her hand as riot police pushed a knot of about 200 shouting protesters toward her.

“I think it’s horrible what they’re doing,” she said of the protesters. “These people need to go get jobs.”

Ms. Fox, you’re probably a perfectly nice lady, at least towards people you know something about, but there’s something you might have missed in your assumption these people don’t have jobs: it’s Saturday. Really, it’s amazing conservatives who want to run down the 99% for not wanting to work fail to ask why the protests keeping swelling on weekends.