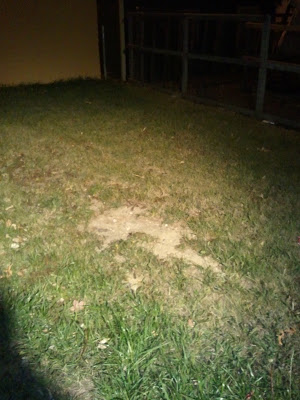 The picture is of some dirt and gravel in my back yard. If anyone wants to conserve this particular bit of soil, now’s the time because I’ll be doing landscaping in the spring and then this stuff is gone.

Earlier this week, I visited the Secretary of State’s website to take a look at a sample ballot. I wanted to see who all I would be voting for, especially the lesser-known races like judges. Normally I just leave those blank, figuring that people who really care about such things do their research and those folks should get to decide among that particular slate of candidates. I knew someone who would always vote for the challenger, just to muck up the system, she said. Although that person was my ex-wife and maybe her knee-jerk distaste for incumbents was a warning I should have heeded.

Well…moving on. This year I thought I’d do my civic duty and find out a little more about the lesser-known races – who’s running and even what in the world ARE some of these things? The first elected office I knew nothing about was the Soil and Water Conservation District, which is apparently a part of the County, although the districts are statewide.

On my sample ballot, the candidates running are Jeremy Haefs vs. Eleonore Wesserle in District 1, Brian T. Peterson vs. Marjorie Holsten in District 3, Andrew K. Moller vs. Richard B. Strong in District 4, and Danny Nadeau unopposed in District 5.

The Soil and Water Conservation Districts focus on things you’d never guess, like soil conservation, wetlands, impaired rivers, and have the final say on whether the tarp is put to use during rain delays at Twins’ games. That last one, not so much, but I’m trying to find some connection to this governmental entity and north Minneapolis.

They do assist with stormwater management and various watershed management organizations – including the Mississippi Watershed Management Organization, which employs local youth in environmental summer internships. So there’s that as a community connection, at least.

I can’t seem to find much on District 1, although Jeremy Haefs is the incumbent.

District 3 is a vacant seat, and The Twin Cities Daily Planet links to a voter 411 guide where only Marjorie Holsten has responded to the questions. Her answers all lean pretty heavily towards anti-government regulations. Take that for what you will, but for a governmental body geared towards environmental stewardship, I’m inclined to vote for the other guy.

I wish that I could vote for both Strong and Moller, as their profiles indicate both would be qualified. Too bad we can’t put one of them in District 3.

These conservation district posts are so obscure, that I’d be in favor of switching them over to appointees. In most scenarios, I want the community to have a say in who their public servants are. In this case, removing something so arcane from a vote could actually make the job *more* accessible to public dialogue. Picture Blong Yang on the campaign trail: “If you elect me as your county commissioner, my appointees will strike the right balance between environmental conservation and optimal land use.” Still not terribly exciting, but much easier to grasp, and perhaps better for assigning public accountability.

We’re also electing Supreme Court Justices, although I have always found the notion of voting for judges to be somewhat odd. I’ve only actively supported one judge, Mark Ireland, based on his anti-foreclosure work as an attorney. Beyond that, whenever I try to delve into judicial elections, I always find the campaigns to be overly vague. The requisite impartiality of a judge basically forces a bland campaign. (Judge #1: “Elect me and I will uphold your rights and enforce the law,” vs. Judge #2: “No, I will uphold even MORE of your rights and–” Judge Dredd: “I am the law.”)

Again, we have the problem of keeping it interesting without wandering into daydreams. For those of you who would like to learn more about statewide judicial elections, the Minnesota State Bar Association has published a list of candidate responses to a questionnaire.

Finally, we’re down to judicial elections for district courts. On my ballot, only two races are contested: Stephen Antolak vs. Elizabeth Cutter in 4th District Court 22, and Mark Berris vs. Lois Conroy in 44. For whatever it’s worth, I’ve seen Cutter and Conroy lawn signs around, and they seem to have support of some of our local political establishment.

So there we have it; the most obscure political races condensed into one, possibly mind-numbing, blog post. My hope is that after reading this, instead of casting a wholly uninformed and random vote, you’ll be able to cast a barely informed and speculative one. After all, isn’t that what makes America great?