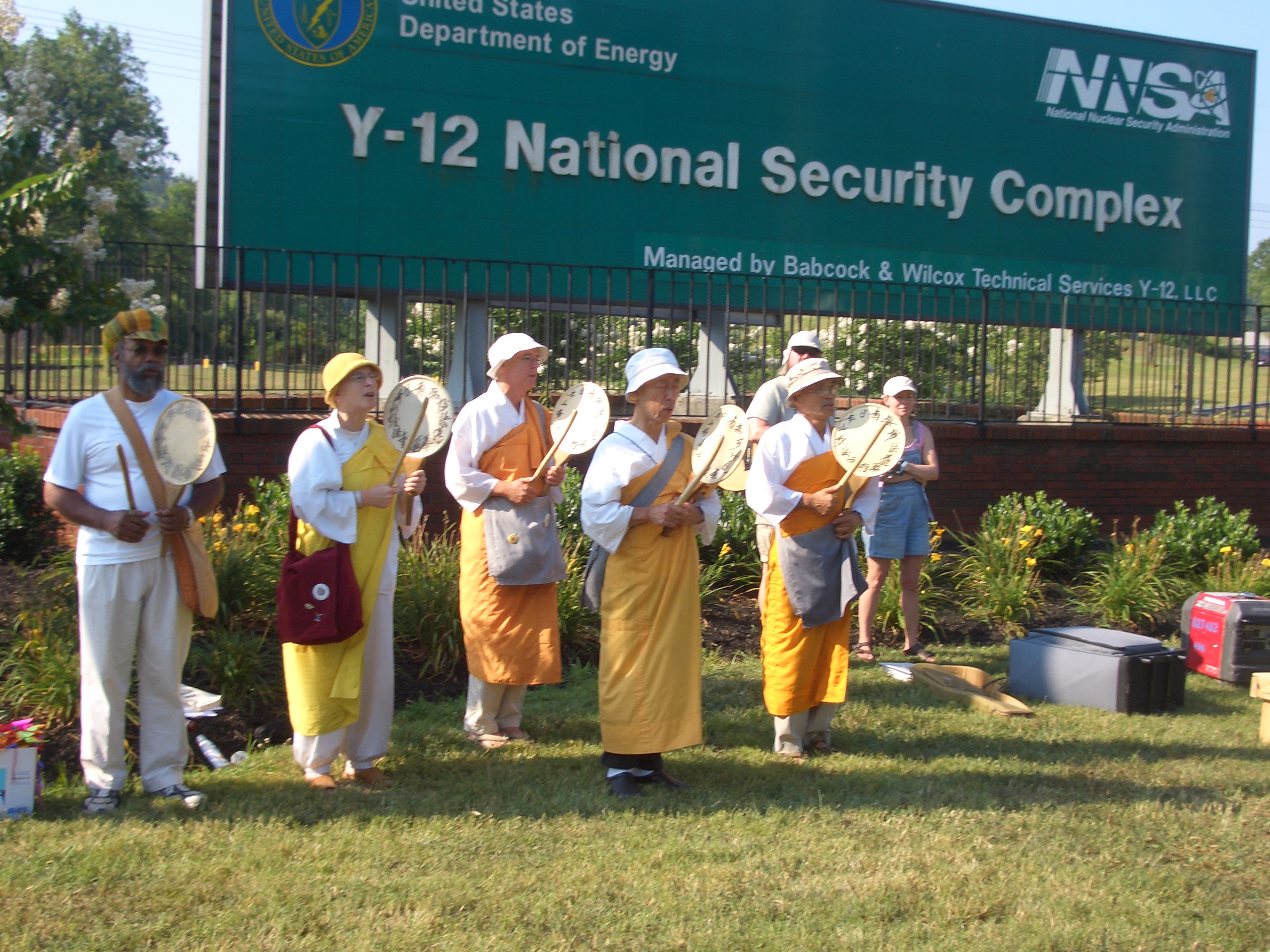 July 7, 2010  – I spent most of Tuesday afternoon sitting in Courtroom 3A of the Federal Courthouse of the Eastern District of Tennessee as my friends were hauled before Judge H. Price Guyton. The Courtroom was packed with supporters of the 13 defendants who had been arrested the previous day protesting at the Oak Ridge Y-12 Nuclear Weapons Plant.

We stood out of love and respect as three women shuffled into the room, shackled at the feet, waist, and hands. If not so absurd for their clearly nonviolent offense, it would have been comical as the Clerk asked them to raise their right hands to “swear or affirm that you will tell the truth” – they could only raise their right arm a few inches due to the waist chain’s attachment to the handcuffs.

Jean Gump, an 83 year-old mother of 12, Sister Mary Dennis Lentsch, a 73 year-old nun who teaches basic literacy skills to economically challenged Appalachian residents, and Brad Lyttle, 82, an activist for peace, disarmament, and civil rights who was part of the 1961 San Francisco to Moscow Peace Walk, the first integrated disarmament walk from Nashville to Washington, DC in 1962, and the Canada to Cuba Peace Walk in 1963, were the first defendants brought before the Federal Judge on criminal trespass charges after having spent the previous 27 hours in jail.

After they were sworn in, the Judge asked the Assistant US Attorney to read the charges of unlawfully entering the property (the defendants had crawled between strands of barbed wire fencing, placed origami peace cranes on some solar collectors, and then circled up to sing and read their “Declaration of Independence From Nuclear Weapons” before being arrested).

The Judge then asked the Prosecutor to read the possible consequences for this misdemeanor trespass charge. The US Attorney read it so fast and quietly that the Judge had to ask her to speak slower and into the microphone so the defendants could understand it. With a straight face she read that those charged with this nonviolent offense could face a sentence of “not more than one year in prison, a fine of up to $100,000, with supervisory release of not more than one year, and an additional assessment of $100.”

The Judge did not blink. He did not blush. He didn’t stand up and “rent his clothes” as the Biblical prophets of the Hebrew Bible did when they heard such an obscene perversion of justice. It was as if the possible fine was a day’s wages rather than this preposterous amount for defendants who not only were nonviolently asserting their rights of dissent and redress of grievances against an unresponsive government on the 4th of July holiday but also all qualified for court appointed attorneys because of their very modest incomes!

I wanted to get out of my seat and scream and holler but this time was for these friends of conscience and I didn’t want to take away attention from their first court appearance for these brave and compassionate citizens. To even suggest that any consideration of a $100,000 fine should be made is an obscenity – something degrading to humans. The President makes public pronouncements about our need to eliminate nuclear weapons and then allows his Justice Department representatives to blithely and unembarassingly claim that this outrageous fine could be an outcome of this case.

Sister Carol Gilbert, 63, and Sister Ardeth Platte, 74, both of Baltimore’s Jonah House Community, Sister Jackie Hudson, 75, of the Ground Zero Community of Pulsbo, WA, and Fr. Bill Bixel, 82, also from Washington state were also defendants later in the afternoon. Norfolk Catholic Worker Steve Baggerly was the youngest defendant at age 45. Most of the defendants have many acts of conscience on their records. Bonnie Urfer, one of the weekend conference organizers from Nukewatch was one of the last defendants to be released under a conditional personal recognizance bond after a long afternoon. The trial date will be set in the coming months. The US Attorney wanted to place a condition that 83 year-old Jean Gump look for gainful employment during this release period before trial but the Judge removed that condition after her court-appointed attorney objected.

When the Judge asked Sister Ardeth Platte if she was satisfied with her court-appointed attorney, she replied, “Well, having just met him, I don’t know if he knows anything about International Law, the [US] Constitution, and Treaties signed by our government. And I don’t know if you are aware of them either”, disclosing her likely defense which cites Article 6 of the US Constitution. That provision states that Treaties signed by our government are “the supreme law of the land”.

The defendants held themselves with calm and dignity despite the outrageous behavior of governmental officials. We must abolish nuclear weapons before they abolish us and all of God’s creation.