Will the economy produce a lot more jobs in 2012, or are we stalled looking at permanent unemployment and a new underclass? It’s an important question because the answer to it predicts the course of the election season far more than anything else. It’s the economy, stupid – really it’s the jobs. Nothing else is likely to matter as President Obama makes the case for his own re-election – and likely runs against Congressional paralysis in the process.

If we want to predict tomorrow’s news today, there is nothing more important than what might happen with employment. While we can never be sure exactly what will happen, we can put boundaries on the possibilities.

There is no doubt that there has been rather weak but somewhat consistent job growth in 2011, as news organizations like CNN are starting to pick up on. If it continues more or less as it has been, Obama should end his first term with no net loss in jobs and an unemployment rate right about the 7.8% he had at the start. Analysts are quick to point out that no President has been re-elected with an unemployment rate higher than 7.2% since FDR, which is to say since the last Depression. A big part of how the public reads this job growth we’ve had so far is how much people believe that we are in the middle of another Depression, or something at least like it, which demands a bit of patience.

Why isn’t job growth stronger? As noted before, it’s already running a bit ahead of economic growth in typical postwar terms, so it’s hard to say that job creation isn’t about as strong as anyone can expect.

One reason that has been suggested by many people is “Structural Unemployment”, or a lack of potential employees with the right skills for today’s jobs. This argument is quietly based on the principle of restructuring, which is to say that the economy is changing rapidly and people have to learn how to cope with the new one. Structural Unemployment, however, is not likely a major problem. The graph below, called a “Beveridge Curve” after it’s inventor Henry Beveridge, relates job openings to unemployment: 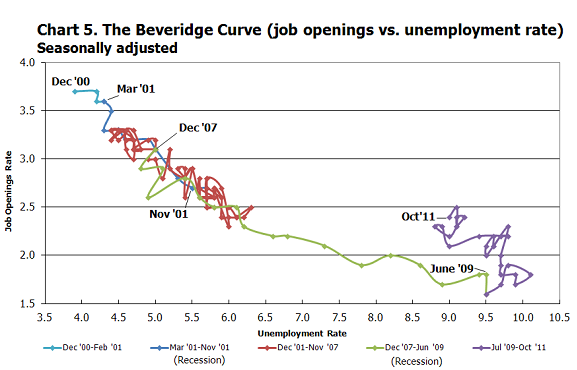 If the problem at hand was one of a lack of the right skills, this curve would shift upward as more job openings produced little to no change in unemployment. This does happen in 2011, but only slightly. A paper by the San Francisco Federal Reserve (pdf link) from last October estimates that skills mis-match does account for about 1% of unemployment, or about 1.3M unemployed. The effect is there, but it’s not huge – the problem is mainly one of lack of demand.

It’s that simple. There is no magic re-training or other program that will get us out of this situation. What counts is increased demand for workers, which is always fueled by growth.

Without economic growth picking up in 2012, it’s hard to see demand changing substantially for workers. Yet there does appear to be just enough pent-up demand from the lack of hiring over the last decade to keep things moving along into the next year.

The key number is 1.6M – that’s the number of jobs that have to be created by about October for Obama to break even. Call it around 160k per month and we know what to look for. It’s worth noting that we’ve been running 200k jobs per month, so it’s entirely possible that this could be pulled out at the last minute.