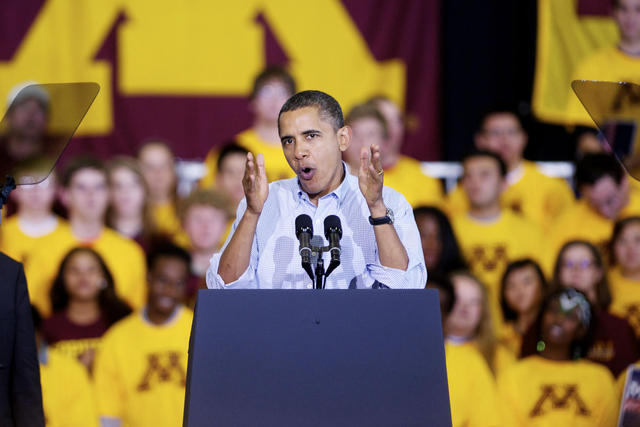 As Obama prepares his proposed budget, which he’ll reveal next week, he has introduced several initiatives to make college more affordable.

Last week, the president proposed an increase in campus-based funds like Supplemental Educational Opportunity Grants, Perkins Loans and the Work-Study program by $10 billion annually. The Perkins Loan budget would increase from $1 billion to $8 billion and, according to the plan, would not be an additional cost to taxpayers.

In a Jan. 27 speech at the University of Michigan, Obama said college is no longer a privilege for some, but rather a prerequisite for all.

Obama also called on the states to do their part in higher education reform.

“Higher education is not a luxury. It’s an economic imperative that every family in America should be able to afford,” Obama said. “We’re telling the states, ‘If you can find new ways to bring down the cost of college and make it easier for more students to graduate, we’ll help you do it.’”

Congressional Republicans have been critical of the plan and have questioned where the funding would come from, fearing taxpayers would get stuck paying for it. During a Senate education committee meeting Thursday, Martha J. Kanter, U.S. undersecretary of education, said the funding answers would come in the president’s proposed budget, due Feb. 13.

Geoff Dittberner, president of the Minnesota State College Student Association, said the rising tuition costs are a burden for many students.

From 1993 to 2012, average tuition has increased by 282 percent at the University of Minnesota, according to the Minnesota Office of Higher Education.

“At the rate tuition is increasing, it’s going to be an unaffordable luxury for students to attend any higher education institution,” Dittberner said.

Because states are cutting back, colleges will be forced to focus on more innovative solutions in combating tuition hikes and lack of state funding, Dittberner said

Obama’s plan calls for reforming student aid to promote affordability and value and to shift aid from colleges that fail to keep tuition down and provide more aid to colleges and that do.

Along with shifting aid based on tuition increases or decreases, the plan outlines incentives to states that “drive for systemic change in higher education policies and practices,” according to a summary of the proposal provided by the White House. The plan — The Race to the Top: College Affordability and Completion — will be a $1 billion investment to stimulate higher education reform at the state level.

As of fall 2008, there were a total of 285,819 undergraduates in Minnesota. Minnesota students took out $2.8 billion worth of loans, grants and work- study funds, according to the Minnesota Office of Higher Education.

“I think there are benefits in the proposed plan,” Weber said.

Weber said that it’s still early, and there has not been much study or analysis done on the proposal and its effects. He said a lot of the tuition issues occur at the state level.

Paul Cerkvenik, president of Minnesota’s Private Colleges Council said in a statement that it is too early to understand all the details, but he applauded the president for trying to keep college affordable.