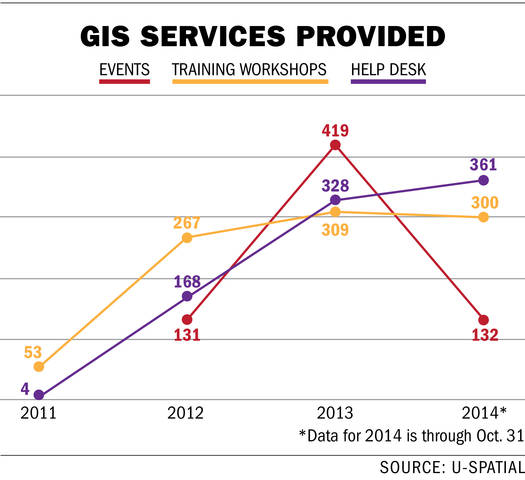 As health volunteers pack up and head to an Ebola clinic in a small Liberian village this month and next, a group of University of Minnesota nursing students are constructing maps of the place, which is practically invisible on Google and Bing maps from thousands of miles away.

In some of the University’s nursing courses, students create regional maps to trace roads, mark exits and entry points between jurisdictions and plot individual housing units to aid volunteers’ efforts in the mapped areas. In one course, students are mapping Fish Town in Liberia’s River Gee County.

“I’m very hopeful that this generation of nurses — especially if they’re practicing in public health nursing — that this will just be a natural part of their toolkit,” said nursing associate professor Madeleine Kerr, the class’s instructor.

Two University nursing professors are already in Fish Town, Liberia, and a public health professor is scheduled to join them in December to aid the American Refugee Committee in monitoring and treating Ebola. Meanwhile, students at the University are mapping the area to assist those overseas.

Dietsche, who works out of Anoka County, Minn., and his classmates are using a free and public online mapping forum called OpenStreetMap to plot Fish Town’s neighborhoods and conduct health assessments.

“When [you] start mapping, you kind of go into a trance. … You could probably map the whole country if you really wanted to,” he said.

At a nursing school event earlier this month, students offered their newfound expertise to teach others how to use the free online program.

One University nursing faculty member, who arrived in Liberia last week, hopes to recruit locals there to contribute to OpenStreetMap and make adjustments to her students’ work, Kerr said.

Without that data, students would have to use images taken in 2005 on a day when cloud cover lowered the visibility of the roads and buildings there, he said. Since then, the village has also tripled in size, Kne said.

Though public health has been using geo-spacial information systems for a long time to investigate epidemics, Kne said, the method has become more prevalent as web-based programs have expanded the public’s access to GIS.

“It’s just easier and easier to collect these vast amounts of data,” Kerr said. “And we’re getting the processes and, I think, the techniques to be able to handle that and … to tell stories from that data.”

Kerr said she has incorporated geo-spatial mapping into her courses for the past two years, so her students can apply the skills used to their future careers.

Dietsche said it is rewarding to contribute to a health crisis that is half a world away, even if it is from behind a computer screen.

“It’s a way to make a difference in conflicts that actually affect their world, and we’re actually using our clinical education,” he said.