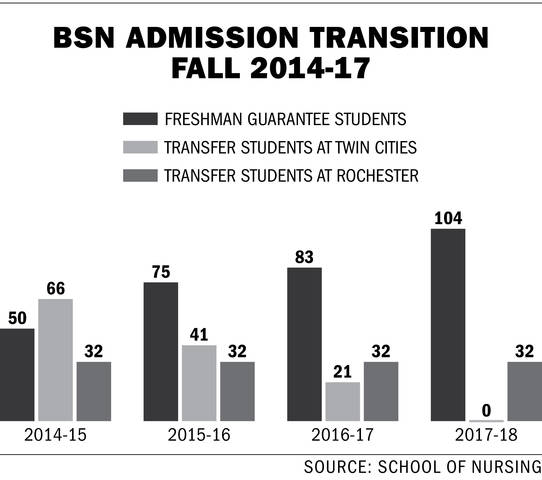 Come fall 2017, transfer students won’t be accepted into the Bachelor of Science in Nursing program on the University of Minnesota’s Twin Cities campus.
The School of Nursing is phasing out transfer enrollment for the BSN program in an effort to improve graduation rates. Though the decision has been in the works for three years, nursing students are concerned the new strategy could be a blow to the program’s diversity and limit access to the program to a group of students who tend to switch out of the program.
The school will admit fewer transfers, including those from inside the University, and more incoming freshmen over the next two years, said School of Nursing Associate Dean for Academic Programs Christine Mueller.
Faculty members who made the change didn’t ask for student input, she said.
By fall 2017, the entire incoming BSN class at the Twin Cities campus is expected to consist of 104 freshmen admits.
The University’s Rochester campus will still accept transfers, who do the same coursework as those on the school’s flagship campus.
Administrators want to provide students with the best resources possible to ensure they graduate in four years, Mueller said, adding that students who directly enroll in the BSN program are more likely to graduate on time.
Nursing senior Karen Maldonado drafted a petition to rescind the program change and organized a public forum last week where students could air their concerns to the school’s dean, Connie Delaney.
“This policy as it stands now is not helpful to the School of Nursing, the future students or the nursing profession,” she said. “But I think with the right adjustments, it can help bring down the over-four-year graduation rate and the cost of attending nursing school.”
About 20 people attended the forum, mostly sophomores and juniors in the BSN program, Maldonado said.
Students largely took issue with the potential for a decline in student diversity as a result of the freshman nursing guarantee. They also voiced concerns about the lack of rigor in the freshman application process compared to the transfer one.
Despite student concerns, Mueller said, the new program is still on track for implementation.
Twin Cities campus instructors give lessons to BSN students on the Rochester campus via television screens, which Maldonado said is troubling to some students because it limits teacher-to-student interaction.
Maldonado’s petition, which has been in circulation for about two weeks, had garnered more than 270 signatures by Wednesday. Most of the names on the petition belong to sophomores and juniors in the BSN program.
One of the petition’s signers is nursing sophomore Irina Galyayeva, who transferred into the BSN program last spring.
When Galyayeva first learned of the change, she didn’t think it was real.
“I don’t get why they’re doing this because they can gain a lot from those transfer students,” she said. “If you remove about half the population right now in the BSN program, then I feel like it will be a loss to the students.”
Nursing senior Nickolai Plattes entered the program as a transfer and says he supports the upcoming admission change.
Plattes was informed of the new model by a professor during lecture. He said he was initially frustrated by the change.
“Everyone was really surprised and mad about it,” he said.
Now, Plattes said he understands the change and would do the same thing if he were charged with ensuring a four-year graduation rate.