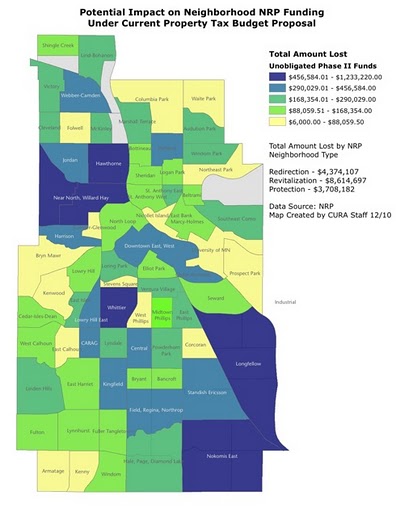 In a bold move December 20, the Neighborhood Revitalization Program (NRP) Policy Board defied a directive from City Hall to freeze certain NRP funds, and withdrew its cooperation with the city’s newly created Department for Neighborhood and Community Relations (NCR).

The Policy Board approved action plans of three neighborhood groups at 100 percent of their NRP Phase II allocations in defiance of the City Council-passed Staff Direction to freeze unallocated funds in excess of 50 percent of Phase II allocations.  The Direction was passed by City Council at the urging of Mayor Rybak in a late-night December 13-14 session as part of the annual budget process.

Full disclosure: Cynthia Frost serves, in a volunteer capacity, on the Board of Directors, Land Use and Transportation Committee, and Housing Committee (chair) of Corcoran Neighborhood Organization in Minneapolis.

The Neighborhood Revitalization Program was authorized by the State Legislature in 1990 as a 20-year program funded by tax increment financing (TIF) in two phases through 2009.  (See sidebar for description of TIF financing.)  The NRP Policy Board has been responsible for distributing funds to neighborhood organizations as they present plans for revitalization and development projects.  In order to receive funds, neighborhood organizations must engage residents in identifying priorities, goals and strategies for their action plans.

This citizen engagement and input process has meant that timelines for preparing a neighborhood plan have varied greatly from one neighborhood to another.  While some neighborhoods have contracted and spent most of their Phase II allocations, other neighborhoods, which presented their plans later, have not yet contracted any Phase II funds.  The NRP Policy Board was to continue the administration of Phase II, while NCR would begin administering new TIF funds, sometimes called Phase III.  The NRP and NCR: Collaboration, Cooperation and Consolidation Plan sets out a series of steps to wind down NRP responsibility and consolidate all functions within NCR.

Jeff Skrenes, Housing Director for the Hawthorne Neighborhood Council, described the organization’s efforts to include input from every demographic present in their neighborhood.  “We were intentional and deliberate in preparing our Phase II plan, and we got punished for it,” said Skrenes. The neighborhood stands to lose $730,000 with the City Council’s recent action, according to Skrenes.

Nokomis East Neighborhood Association first presented its Phase II plan to NRP last week.  While the NRP Policy Board approved their action plan at 100%, that does not guarantee that they will actually receive those funds.  The other groups to receive 100% approval on December 20 were Calhoun Area Residents Action Group and McKinley.

In light of years of planning and collaboration, the Staff Direction came as a shock to NRP personnel and to staff and volunteers of neighborhood organizations.  “We were shocked to read about this in the newspaper when it is something that so drastically affects our funding,” said Amy Arcand, Executive Director of the Corcoran Neighborhood Organization.

State legislators also expressed dismay at the city freezing legislatively-authorized funds authorized without any dialogue. Representative Joe Mullery called the city’s proposal “improper and illegal,” adding, “It’s amazing they took an action like this without working with us at all.”  The Minneapolis delegation of state legislators met with neighborhood leaders to discuss the action in an emergency meeting on December 12.  More than 60 people were in attendance, in spite of a winter storm that left streets nearly impassable.  Senator Ken Kelash, Chair of the NRP Policy Board, explained that while past mayors and city councils have tried to take control of neighborhood funding, “this is the first time that I can recall that we’ve ever been ambushed, and that’s what this is – it’s an ambush.”

The Staff Direction will have no impact at all on the 2011 Minneapolis city budget or on 2011 property taxes. The Minneapolis City Council approved a 2011 budget and raised the city share of property taxes by 4.7 percent. (Homeowners may also see property tax increases in other portions of their assessment, such as school district share.)

The Direction seeks to reduce by 50% revenues captured from the TIF district that was authorized in 2008. If approved, the reduction could have an impact on reducing property taxes in 2012 and 2013.

Lawmakers questioned why the City would take an action that would have an immediate detrimental effect on many neighborhood organizations but would not have any immediate effect on 2011 budget or property taxes.  Representative Karen Clark pointed out at the December 12 meeting that the action would have a delayed impact on property taxes but an immediate impact on neighborhoods. “This just seems like such a destruction of a neighborhood engagement process. I’m just appalled,” stated Clark.

At its December 20 meeting, the NRP Policy Board passed a resolution to end all collaboration with the city’s newly-created Neighborhood and Community Relations (NCR) Department and Neighborhood and Community Engagement Commission (NCEC), and withdrew its support of the plan to consolidate the work of NRP and NCR.  The Policy Board is composed of representatives from the governing jurisdictions, including the City of Minneapolis, and of neighborhood and non-profit foundations and agencies. No representatives from the city council or the mayor’s office were present at the December 20 meeting.  The resolution passed unanimously.

The resolution states the mayor and city council violated the core principles of community engagement adopted by the city in 2007, violated principles in the NRP-NCR Consolidation Plan, and compromised the integrity of the NRP program. The resolution rescinds the board’s support for the consolidation plan and directs the NRP director to “end all collaboration efforts with the NCR and NCEC.”

More of the story about neighborhood organizations and city government

The city council appointed the NRP Work Group, which sent a final report to the council in 2008 outlining a Framework for the Future to carry on the vision of neighborhood revitalization via a new city department and a citizen advisory group. Subsequently, the city adopted a plan that it referred to as Phase III of NRP, which set up a city department to oversee neighborhood revitalization, the Neighborhood and Community Relations (NCR) Department. This department would administer TIF funds captured in the Consolidated Redevelopment TIF District authorized in 2008 to begin in 2011.

Critics of the Framework say that its centralization would result in city priorities trumping neighborhood concerns, and a central, duplicative bureaucracy would eat up limited funds that would be more efficiently handled at the neighborhood level. 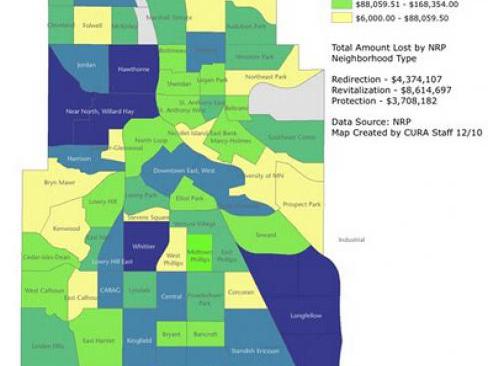