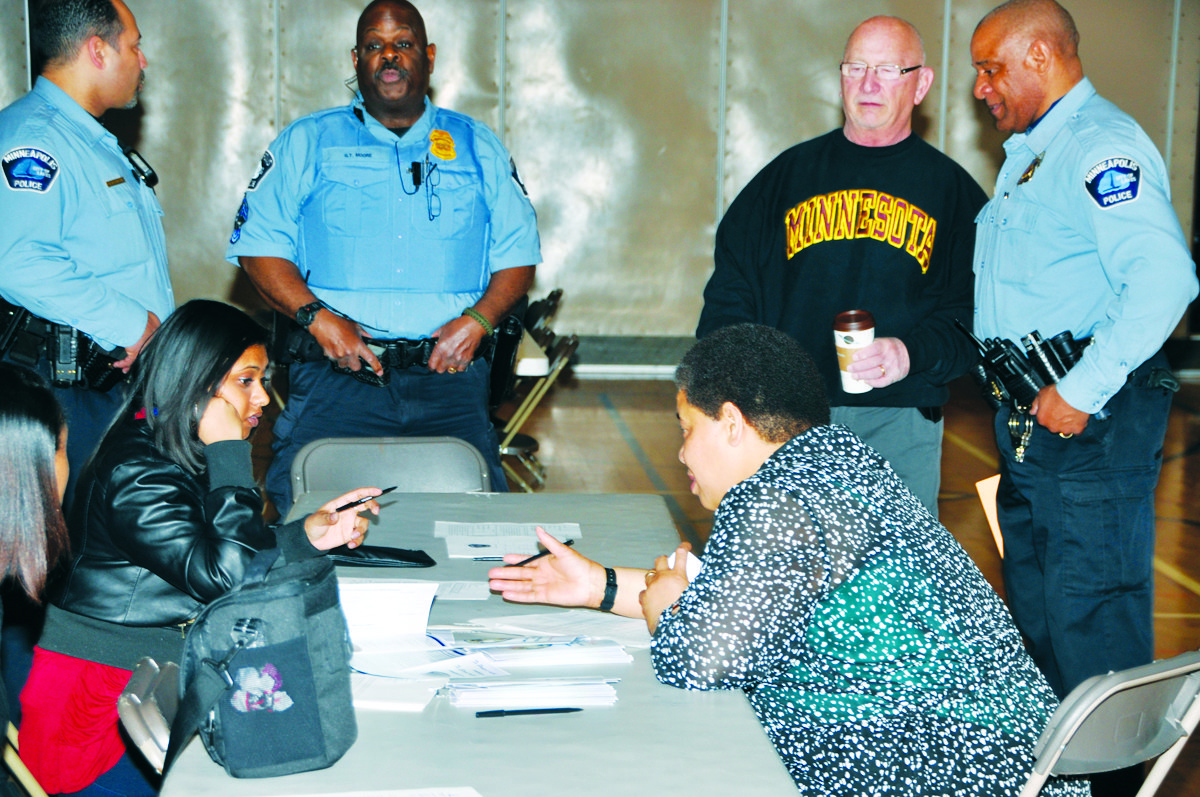 It is no secret that historically the relationship between the Minneapolis Police Department and communities of color in Minneapolis has been tense, at best. Between brutality, shootings, racial profiling and other problems, the tension has led to the creation of a civilian review board, and even at one point, to federal mediation. Yet the tensions continue.

Minneapolis police officer Eric Lukes, a 27-year veteran of the force, is attempting to put into place a long-term solution to improve relations: recruiting more people of color to be on the Minneapolis police force. To that end, with support from the Minneapolis NAACP, Minneapolis Urban League, and the Community Standards Initiative, the first of an undetermined number of events was held Saturday, April 19, at North High school to generate interest in the community to join the force.

“Our goal is to try to recruit as many people of color as we can and put them through the process. I want to inundate the City with police candidates, so the City will have to say, “We’ve got to start hiring people of color.”

Lukes believes that now is the time to begin to turn things around, as the police department will be facing a large number of retirements in the next few years. At the North High event, several other officers spoke with community members about law enforcement opportunities and explained the various programs the department is offering. Among those offered are the Community Service Officer Program, Police Cadet Program, Police Recruit Program, and Traffic Control Agent. 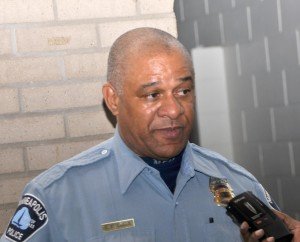 But, of the overall outreach initiative, Lukes (pictured, right) said, “I don’t call this a ‘program’. I call it an ‘opportunity.’”

Former Minneapolis Police Sergeant and current Minneapolis NAACP 1st Vice President Lisa Clemons was also present. “Now is the time. This is the time,” Clemons maintained. “If you want things to change, now is the time to come in and be part of that change.

“We’re talking about creating 10,000 jobs for people of color,” Clemons continued. “The Minneapolis police department has to be part of that also. In the NAACP, we’re working on construction jobs, and now we’re working with Officer Lukes to get people from this community into the Minneapolis Police Department.”

Although the event at North High school was to be only the first of its kind, Lukes and the others involved in the initiative have not yet determined how many more such community events will be held, but they do see it as a continuing, open-ended initiative. “I’m in it for the long haul. I’m trying to recruit as many people as I can to come into the police department,” Lukes commented. “The Minneapolis police department is a wonderful place to be.”

In response to our request for comments from MPD Chief Harteau, we received the following statement from John Elder of the Office of Public Information attributed to the chief:

“With an aging department and the change in PERA rules, the Minneapolis Police Department has been forecasting our personnel numbers with a strong eye this year as there would be a larger retirement number than usual. The attrition brings both challenges and opportunities.

“We must have a succession plan as we lose experience, while having an opportunity to strengthen the diversity within our sworn ranks. We have been aggressive in our hiring and recruit efforts, including a multi-cultural recruitment team to focus on minority recruitment. This includes hiring of police cadets, police recruits, and lateral hires. We anticipate attrition being steady over the next 3-5 years and we will continue to monitor the staffing needs of the police department.”

Information about recruitment opportunities in the Minneapolis Police Department may be obtained by calling 612-673-3755 and through www.minneapolismn.gov/police/recruiting.