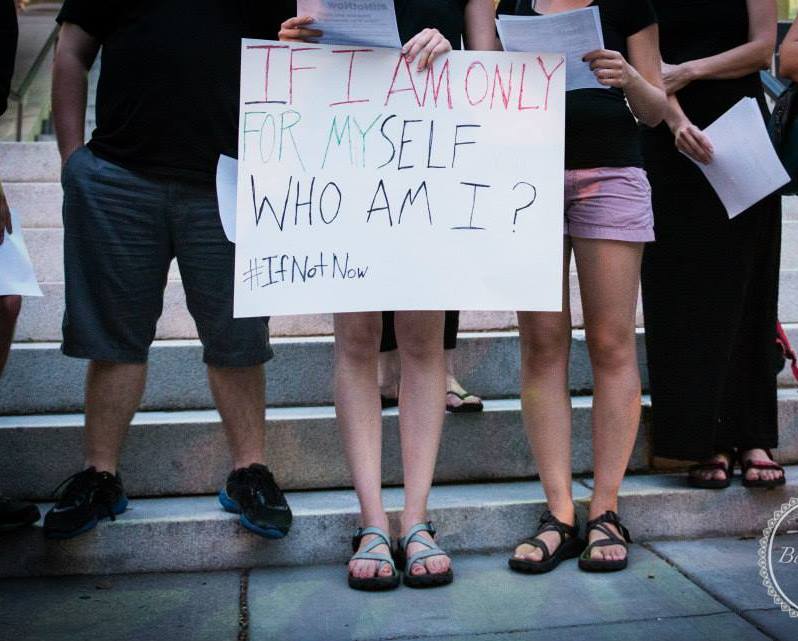 I am one of those millennial Jews who actually loved institutional Judaism growing up. I loved my synagogue, I loved my Hebrew school, and in fact, I am a 23-year old single woman from the Twin Cities currently exploring synagogue options in Washington, DC. Most people reading this probably understand that most Jews in their 20s and 30s without families don’t often place synagogue life at the top of their Jewish or social life, but I love the feeling of belonging, membership and lifecycle events that institutional Judaism provides.

This past month, though, has shaken those warm positive feelings about institutional Judaism. As I write this, 1,662 people have been killed in Operation Protective Edge. 67 Israelis: 64 soldiers and 3 adult civilians. 1555 Palestinians: 191 Militants, 726 adult civilians, 326 children civilians, and 310 Palestinians with an unknown role.

Institutional Judaism overwhelmingly provides unwavering support to the State of Israel, regardless of its actions. I used to be of this attitude as well; I used to make statements such as, “Everyone critical of Israel is anti-Semitic,” and, “Palestinian children are brainwashed to hate Jews.”

Yes, some individuals who criticize Israel are anti-Semitic; but it is lazy and lacking of critical thinking to label every single person who is critical of Israel as anti-Semitic. Some who criticize Israel are Jews who hold their faith and background close to their heart and values. Calling them a “self-hating Jew” is truly one of the most offensive and dividing things we can do to fellow community members.

What I love most about Judaism is our ability to question, critically and empathetically. We don’t need answers to all of our questions, but we must be brave enough to ask. It’s a fundamental teaching of my Judaism.

I have seen little critical questioning this past month from the American Jewish organizational community. I see almost no humanization of Palestinians from mainstream Judaism. I see atrocious and uncontested support of the decisions the Israeli government makes. This includes the bombing of the ONLY power plant in Gaza, impacting the community’s already troubled access to water.

Where is the outrage? Why do we see Palestinians as less than human? And please, do not answer that question with, “They don’t see us as humans;” because I’m tired of the justification of the death of children, I’m tired of the justification of basic human needs not being met, and I’m tired of our community not being brave enough to criticize within. I’m holding the American Jewish community to a high standard because it’s my community and I demand leadership and accountability.

In my freshmen year of college I met Nurah, a Palestinian-American who was adopted from an orphanage in East Jerusalem when she was four years old. As our friendship developed, so did my ability to humanize the experiences of Palestinians. I had been fed one narrative my entire life of how Israel was the victim, period. There was no nuance, no accountability, no blame placed on Israel; and perhaps most importantly no emphasis on understanding that Israel is in fact a powerful nation; we are not simply victims.

Israel and Palestine do not sit on an equal playing field. We see this with the fact that Palestine is not actually an official state, in the difference in casualties between Palestinians and Israelis, with the blockade in Gaza, in the lack of freedom of movement in Gaza, and we see this with the high level of aid that Gaza needs to simply keep its civilians alive.

On July 20, 2014, writer and activist, Peter Beinart posted this Facebook status about the American Jewish community’s reaction to the current ground invasion. In part, he says:

What frightens me about the organized American Jewish community is that it has no independent standard at all. Whatever the Israeli government does is, by definition, moral. Whatever the Palestinians do is, by definition, immoral. It’s an utter abdication of one’s own faculties–and completely contrary to the way American Jewish leaders act toward their own government… Can anyone say, with confidence, that there is any action the Israeli government could take that American Jewish leaders would not seek to justify? I can’t, and that terrifies me.

Perfectly getting at my point, Beinart points at American Jewish institutions’ unwavering support of Israel, which solidifies their complicity in Israel’s actions. When our American Jewish community paints Israel as a victim and Palestinians as the ultimate committers of evil, we rid Israel of any responsibility and obligation to act in a way that respects human rights and dignity.

Something I heard a lot growing up was how humane the IDF was in its dropping of fliers before bombing a location in Gaza. But this only reinforces the power dynamic of which I’ve been speaking between Israel and Palestine. Where, exactly, are Gazans supposed to go after receiving this warning? Gaza is one of the most densely populated cities in the world, and there is a blockade blocking Gazans movement. You tell me where they are supposed to go with a leaflet that was dropped off in front of their home saying run.

Israelis live in fear of rockets and violence, and have experienced great trauma in this and previous wars, no doubt. Yet the fear and trauma that Israelis are facing is no excuse for the excessive number of Palestinian civilians who have been killed in this war. I hold Israel—a country with my people’s symbol on its flag—to high standards of preventing death at all costs and supporting human rights in the occupied territories. I am tired of the lack of real, dynamic, critical conversation in the Jewish community. And honestly, we need to move past simply opening the conversation up in our community, and onto saying No to the occupation of Gaza and the West Bank, No to the excessive killings, and Yes to acknowledging Israel as a powerful leader.

My politics and position on this issue have driven me to become involved in the “If Not Now, When?” movement that is sparking up across the country. On Tuesday, August 5, I will join other American Jews of various backgrounds at the Jewish Federation of North America office in Washington DC at 12:00pm to say “Not in our name.”

I am a Jew and I say no to occupation and yes to demanding freedom and dignity for all, Jew and Palestinian.

Sarah Brammer-Shlay is a proud native of Minneapolis, Minnesota. She currently lives in a fantastic group home in Washington, DC. Sarah enjoys good conversation on social justice, Israel/Palestine, feminism and even more when there is coffee involved. She is a member/founder of “Real Life Athena: A Women’s Collective.” You can check out her writing there too.