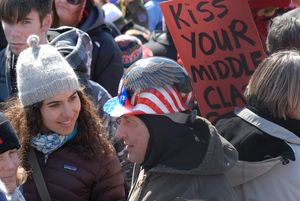 My friend Ted Fiskevold, a member of the National Writers Union, UAW Local 1981, Twin Cities Chapter 13, and a fine photographer, took a solidarity road trip with Mark Froemke, president of the Western and Red River Valley Area Labor Council of the AFL/CIO,  across the Midwest to document union action across the region. He’s put together a photo blog of their trip. which readers should go check out. TedF captured some great images.

The trip received a write-up on the DL-Online, Local man attends big labor rallies in Wisconsin, Indiana. He reflects on the rallies:

“It really is pretty simple,” he said. “The haves have more and the have-nots have less – there really is class war going on in this country and people are getting angry about it.”

The rally on Saturday was the biggest in a month of protests and rallies in Madison, and the capitol grounds were full, Fiskevold said.

“It was like walking at WE Fest after the Saturday night show and trying to get out of the concert bowl – it was like that all around the capitol area,” he said.

With his permission, here’s a tease, the first three paragraphs of the last entry, Full Circle to Hudson, Wisconsin: 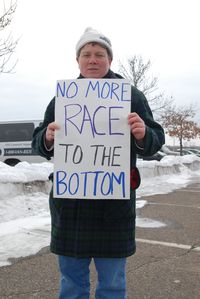 Mark Froemke and I wheeled into the Park and Ride lot near the bridge over I-94 in Hudson, Wis. a little after 3 p.m.  A visibility picket was just winding down and Candace Lund, Minnesota AFL-CIO Mobilizing and Organizing Director was busy wrapping things up.

Candace, a woman with a lot of ‘zing in her title who puts a lot of zing into her job, told us the picketers encountered “Even greater reception that the first few Hudson rallies.”  That was not surprising since the polls had not been kind to Wis. Gov. Walker or his Republican allies in the legislature in regards to his view on collective bargaining and his association with the Koch Brothers.

The visibility picket message was mainly on the recall to keep people stirred up about Walker, but more importantly, to aid in the recall efforts on Republican Senator Sheila Harsdorf.  Harsdorf’s district includes Hudson, bucks right up to the Minnesota border, and requires 15,744 petition signatures in order to recall her.  A goal that was not too lofty, Candace told Jerry Ockerenfels, Froemke and me.

Go check it out. On Monday, TedF will be posting an entry about use of the photos by others.