Hundreds of people from all walks of life on Tuesday joined Northwestern Health Sciences University in Bloomington, Minnesota to celebrate Chinese New Year which was began on February 1, 2014.

“Since 1990s, we started celebrating Chinese New Year to showcase the diversity and inclusiveness of our university,” said Alejandra Estrin Dashe, Director of Diversity Commission at the university.

Spreading the joy of Chinese Lunar New Year, the university treated the attendantees of the celebration to an arora of Chinese traditional dishes with multicolred traditional hand made crafts and Chinese laterns hanging from the ceiling.

“Food is really good. Since we can’t have such gala celebration every day in our community, I am going to learn how to prepare the dishes,” said John Peter, a young man in late twenties, receiving a small booklet of Chinese cuisine recipes that were being distributed at the front door of hall. 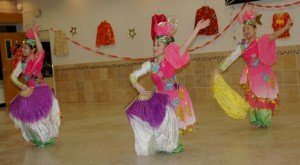 Right: Young female Chinese artists performing “Fish Dance” which symbolizes “luck” for the new year. They were one of several Hmong and Chinese youth groups to perform a the Northwestern Health Science University Lunar New Year.

Following the freebite, a local Chinese dance threater, Any Asian Dance Group took over the stage and mesmerized the audience with a variety of cultural shows showcasing folk dances of the minorities in China.

Hmong ethnic drum dance was one of the few that audience loved most but some of the solo kunfu sytle dance-performance were also equally entertaining. 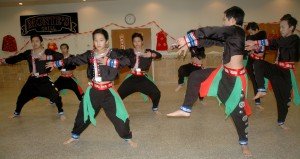 Left: The Hmong dancers perform the solo kunfu sytle dance. They were one of several Hmong and Chinese youth groups to perform a the Northwestern Health Science University Lunar New Year.

Tendar Tsering is a freelance writer based in Fridley, MN. Previously he worked with International Business Times.