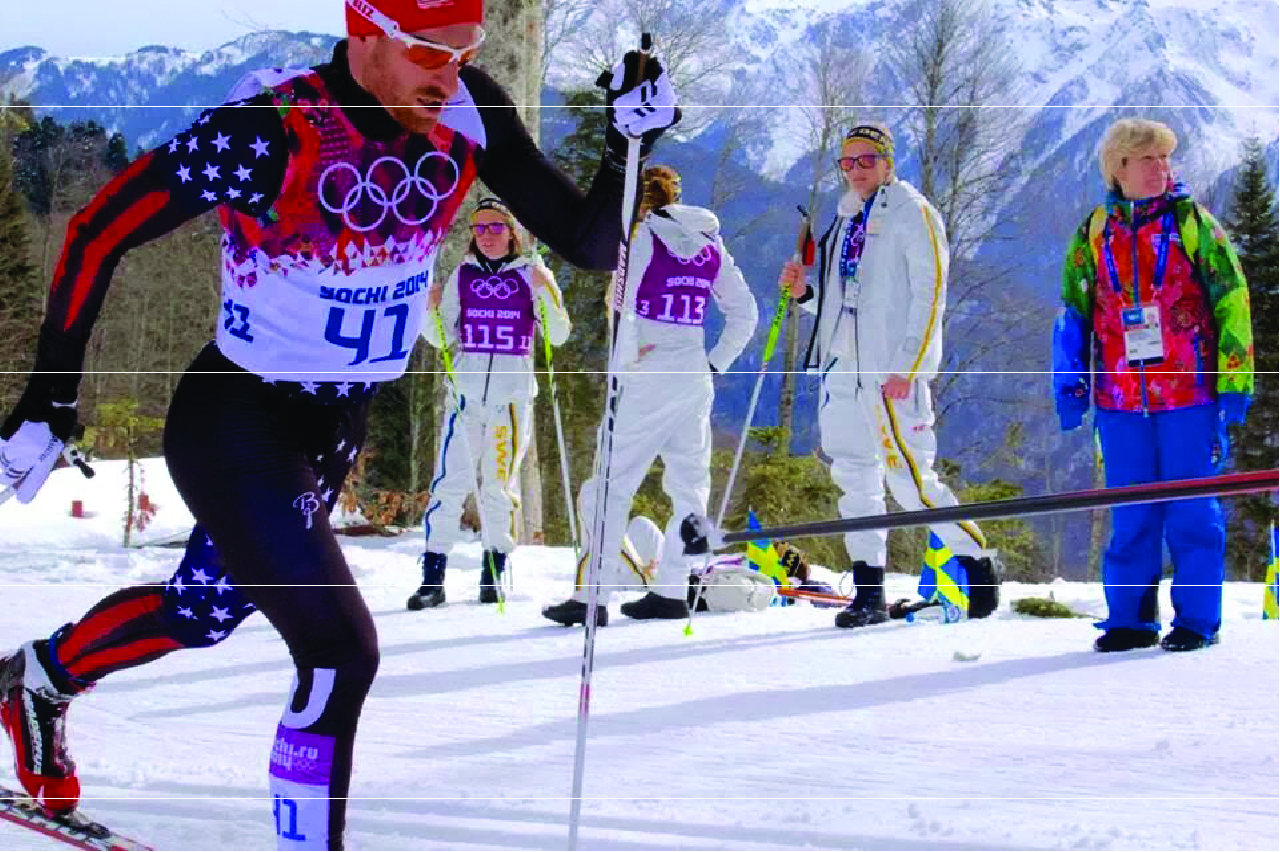 Absolutely beautiful, according to Northsider Brian Gregg, who skied in three events at the 2014 Olympic Games. Although his last event was Feb. 23, he hasn’t returned home yet, because he’s skiing in Alaska. Last week, however, when NorthNews caught up with him by phone, he shared some of his Olympic experiences.

Gregg said his team took a chartered plane from Munich to Russia. When they arrived in Sochi, each athlete was assigned to a village. There were three villages: the Coastal, which housed the ice skaters and others; the Mountain, where the alpine skiers stayed, and the Endurance, where the cross country skiers lived. “The Endurance was like a luxury spa, and was the nicest of them all,” he said. “It was on top of the mountain and you had to take a gondola to get there. Maybe after the Olympics, they’ll turn it into a hotel.

“It was probably one of the most beautiful venues I’ve ever been to, with its panoramic views,” Gregg said. “It was amazing to think that every single part of it was built just for the Olympics. Seven years ago nothing existed here.” In addition to the buildings, the Russians also put in a new road, he added.

“Our room was really nice,” he said. “You heard all kinds or horror stories [about the conditions] but we didn’t see that. There was some last minute work going on, but the media really played up the negative things.”

When asked about security at the games, he said, “We were lucky, they tried to streamline security and check in for the athletes. We were quite protected up on the mountain, and we felt extremely safe.

“Everyone I met was incredibly friendly,” he added. “The volunteers wore colorful coats so you could identify them. Most of them were Russians, although some were from Croatia. It was fun to talk to them. They thought it was pretty cool to be part of the Olympics. My favorite quote from one of them was, ‘Man, you couldn’t pay me to work this hard!’”

When asked about the weather, Gregg said, “It was quite warm. I raced in t-shirts at the last two events. It was beautiful to be up there as a spectator. For the athletes, they did something to prepare the tracks so the snow didn’t break down.”

(News reports about the games said that temperatures rose to nearly 50 degrees on Sunday, Feb. 23, which made the 31-mile men’s 50-kilometer freestyle race particularly challenging. At the time, Gregg told reporters, “My legs were a little bit heavy, so I just couldn’t quite be on that pace. This is the race I’ve been focusing on. Overall, I felt pretty good.”)

Gregg finished 51st in the 50K, and was the second American to cross the finish line. He said between 60 and 65 people competed in the race. He finished 47th in both the 15 kilometer classic start and the 30 kilometer duathalon. “One of the real highlights for me was that I was not expected to get the 15K classic start, but the 30K went well for me and I did. That was the day my family arrived. Other guys gave me their extra spectator passes so my whole family could get in. They rode the gondola up the mountain. [When I raced] I could hear them all cheering: my mom, dad, brother, sister, and sister-in-law.”

His wife, Caitlin Gregg, didn’t make the trip to Sochi, although Brian said she had come close to qualifying for the Olympic team. She stayed home, training for another race. On Feb. 22, Caitlin won first place in the women’s 50K skate event at the Birkebiner race, in Cable, Wisconsin. (The Birkebiner, by the way, is the largest cross country ski event in North America.)

Brian said that Caitlin had competed in the 2010 Olympics in Vancouver, but they hadn’t been able to share that Olympic experience, either. “It was a tough thing,” he said. “I really wanted to go and cheer her on in Vancouver, but I had to train. Racing is how we earn our living, by getting sponsors and winning prize money.”

He said they are both looking toward the future and the 2018 Olympics, but now are “immediately anticipating” the World Championships in 2015 in Sweden.

When they’re back home in Minneapolis, the active couple stays busy by—among other things–working with kids at the Jerry Gamble Boys and Girls Club, where they have volunteered for the past four years.

Fans at the Jerry Gamble Boys and Girls Club, where he and his wife volunteer, cheered for his success.