The Northside Transportation Network held a meeting Thursday evening to discuss the next steps in planning both the Bottineau LRT line and forming a broader transit system for north Minneapolis. Taking a larger view on transit options is a huge step forward. Council Member Samuels previously said that choosing between the two light rail options was like having someone ask “Do you want to get passed by or run over?” The D1 route through the park or D2 down Penn force a choice between whether our community is divided or simply ignored. Neither choice is workable for successful transit-oriented development.

A city staffer was present to explain the Council’s position, that they support D1 and expect to take another vote in May of this year. Don Samuels added a motion that we examine the streetcar option as part of the transit development and LRT alignment. Minneapolis really only has the capacity to make four LRT lines – the central corridor, Hiawatha, the southwest corridor, and Bottineau. After that, we’re done with LRT because there just isn’t the space for it along other developable corridors.

But one advantage that streetcars have, as shown in the second photo, is that one streetcar is about sixty-seven feet long. A light rail car is ninety feet long, and a three-car train segment extends for a full city block. Streetcars can therefore be easily added to most streets (if ridership and budgets allow) because they can handle almost every needed turning radius.

Streetcars have several other distinct advantages for north Minneapolis. If LRT is the sole transit development our community gets, then the D1 route would give us only two stops in the community. D2 would allow for three, perhaps four, but at a much higher impact along a residential corridor. A streetcar system that goes from downtown, up Washington, and then along Broadway to Robbinsdale would have about fifteen stops over north. The line would connect with the proposed southbound streetcar route along Nicollet Avenue.

LRT along Penn Avenue would not only require the acquisition and removal of over one hundred properties, it would also make many cross streets impassable. Streetcar infrastructure is built into the street itself, making it possible for public transit to share lanes with other vehicles. Yet the visible nature of the streetcar lines make it more likely that casual riders will take note, and use that transit much more frequently than they would ride a bus. 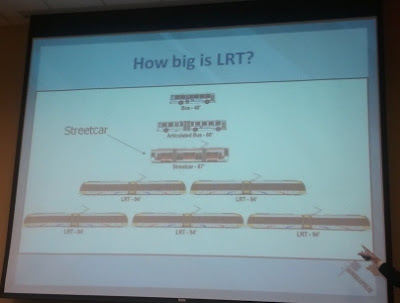 The city of Portland was held up as the most similar comparison to what we could accomplish here. Construction took about three weeks per block, and the development potential was so great that much of the push – and some funding – was led by the private sector. The advantage we have is that the federal funding streams are currently much more favorable to urban cores.

For all you budding northside history buffs, there is one drawback. It would be virtually impossible to get our original north Minneapolis streetcars back into use. That’s because they’re still being ridden in Mexico City and San Francisco. Streetcars last a rather long time, is what we’re getting at here.

Although this was the main focus of the evening, the Northside Transportation Network did branch off onto other topics. Doing so was a welcome change for this blogger, as I had thought previous meetings were too focused on Light Rail, and excluded other topics.

Should D2 be chosen as the LRT route, streetcars would stop at Penn and Broadway instead of going all the way to the Robbinsdale Transit Center. It’s not clear if they would still qualify for the same kind of funding at that point. Regardless of which choice is made, the northside will likely see increased bus service along Penn Avenue and the Emerson/Fremont corridors. Those changes could happen almost immediately.

NTN is also beefing up their outreach efforts, through a program called Corridors of Opportunity. Through that initiative, partners will do outreach to African and Asian immigrant communities and specifically engage underserved groups in the transit dialogue. Even the early stages of this engagement has paid dividends. The meeting had one of the highest turnouts of Southeast Asian residents I’ve seen at such an event.

Whatever decisions ultimately come from these groups, it looks as if northside transit is heading in the right direction, and everyone’s on board. Our next meeting is on May 31st.