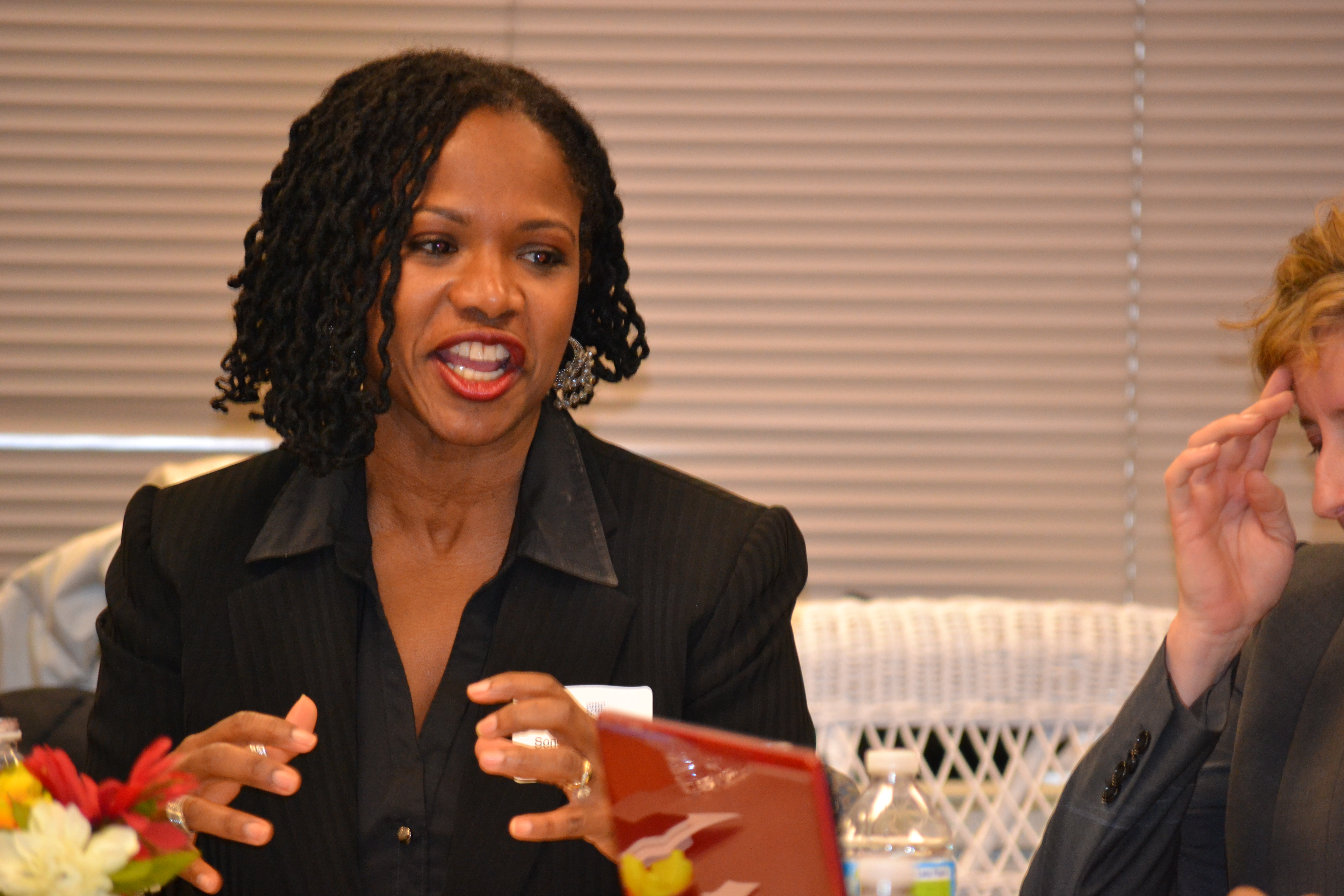 Over the next five years, just over 1,000 families in an 18-by-13-block area of North Minneapolis will be participating in a $28 million social experiment. What is at stake is much more than money; what is at stake is the future of these families’ 3,000 children, and perhaps, insofar as it could become a model for other such efforts, the futures of countless more families and children.

This story is the first of an occasional series. Next week, find out what steps NAZ will take to ensure that families in the Zone are successful.

It started with Michelle Martin and Minneapolis City Council Member Don Samuels founding the Peace Foundation in 2003. Martin served as the organization’s original executive director. The Peace Foundation’s mission was to combat violence in North Minneapolis by first determining what was causing higher crime rates.

“Our whole purpose was to come up with permanent solutions,” Martin, now NAZ COO, explains.

In 2007, then-Senator Obama took notice of Geoffrey Canada and the Harlem Children’s Zone. “If poverty is a disease that infects the entire community in the form of unemployment and violence, failing schools and broken homes, we can’t just treat those symptoms in isolation. We have to heal the entire community,” Obama said during an August 2008 presidential campaign speech.

“That’s why, when I am president of the United States of America, the first part of my plan to combat urban poverty will be to replicate the Harlem Children’s Zone in 20 cities across the country.” Once elected, through the Department of Education, Obama set about making changes that began the replication process of what he termed “Promise Neighborhoods.” Now that process is reaching the North Side of Minneapolis.

Even before the Promise Neighborhood concept was developed, the foundation for the Northside Achievement Zone (NAZ) was being laid as Peace Foundation members turned their attention from violence, a symptom, to education, the plausible solution, causing the Geoffrey Canada model Obama spoke about to hit their radar.

“Permanent solution, in our minds, became increasing educational outcomes,” says Martin, “so that kids and families have opportunities that they can point to instead of going in the direction that the lack of educational opportunities and outcomes in life kind of lead people to explore.”

The term “Promise Neighborhood” derives from the concept of neighborhoods with a commitment — or promise — from the adults to provide great schools, strong families and community support.

Like the Harlem Children’s Zone, the model rests on the philosophy of creating an educational “tipping point,” as described in Malcolm Gladwell’s book of the same name. This is the point at which a critical mass of people exhibiting a particular behaviour starts to influence those they come in contact with.

Three years ago, 50 Northside leaders visited Harlem’s Children Zone. “We all knew that our individual programs and communities were not changing the outcomes significantly for children,” says NAZ CEO Sondra Samuels.

The Harlem Children’s Zone operates on a $90 million budget, has 3,000 employees, and has Promise Academy at its center, three schools headed by Geoffrey Canada. Samuels says the Minneapolis visitors asked themselves if they could replicate that place-based approach in a place that didn’t resemble Harlem and using partnerships with already-established organizations, including public, public charter, parochial and alternatives schools.

Now they have a chance to find out. Over the next five years the NAZ will be receiving an infusion of $28 million, thanks to a Promise Neighborhood grant that will at some time in the future provide them an answer to their question. It will be dispersed in five increments of approximately $5.6 million, the first to be received during 2012 and the remaining over the following four years. They are one of five similar grant recipients in the nation.

Katie Murphy, communications director for NAZ, grew up just one block outside of the North Minneapolis area. Though she spent almost two decades working for corporations in downtown Minneapolis, she says her passion is using the knowledge she’s gained over the years to make systems changes that decreases poverty.

She was mainly involved in the grant writing that culminated in the $28 million that will be used to support and further the NAZ initiative, but she came to NAZ as a volunteer when it was the Peace Foundation.

In 2010, the two-step grant applications process began with seeking a $500,000 planning grant designed to help organizations get to the pilot stage of their proposed program. NAZ was not chosen as a planning grant recipient.

“We decide to continue forward and act as though we did get accepted,” Murphy explains. They took the Harlem Children’s Zone model and tailored it to the needs of the North Minneapolis area that they were focusing on. “Our program was already up and running… So we lined ourselves up with the Promise Neighborhood model even more so than we had in the past.”

In the summer of 2011, NAZ applied for the second step of the process, the implementation grant, and they were one of five proposals that were accepted — the only recipient that had not received a planning grant.

Murphy says that the granting committee was impressed by the level of matching funds received from their partners and accumulated through their own fundraising efforts. NAZ was operating on a budget of approximately $1.4 million before they received the grant. They were able to demonstrate successes achieved since submitting the planning grant application.

Statistics in the zone

If a qualifying factor for the grant was to depict an area with few or insufficient safety nets, offering little likelihood of a person having the resources to develop a “pick yourself up by your own bootstraps” mentality, the NAZ team did its job. In an attempt to get an accurate representation of the Zone for grant purposes and to understand the population whose needs would be addressed through the NAZ initiative, NAZ members combined data from the 2010 Census Bureau, Minneapolis Public Schools, the Wilder Foundation and the Minnesota Department of Education.

The data showed that of the 14,798 people living in the Zone — 5,615 being children making up 38 percent of the neighborhood — 47 percent were African American. The Zone is made up of an estimated 2,047 families with approximately 2.7 children per family. Of these 2,047 families, the NAZ plans to work closely with approximately half, or just over 1,000, in the hope that their success will turn the community around.

Twenty-four percent of the Zone’s third-through-eighth-grade children perform at grade level in math and 28 percent in reading. Children in the Zone attend 145 different elementary and secondary schools, and of the 11 schools in and near the Zone, only one — Loring Elementary — is neither a low-performing nor persistently low-achieving school. However, Loring is not meeting Annual Yearly Progress, meaning they may soon enter a corrective action status.

Twenty-five percent of the students in the Zone met homeless or highly mobile criteria during the 2008-2009 school year, and during the period of 2007-2010, 33 percent of the Zone’s properties underwent foreclosure.

The Samuels family has been living on the North Side for 15 years. Sondra Samuels describes many of their neighbors as great, but others of them as challenging.

“We’ve dealt with prostitution, gang banging and slumlords,” Samuels says. She also admits that at times when she is inundated with the negative aspects of the neighborhood she becomes pessimistic, asking herself why people aren’t striving harder to improve their life situations.

Three rounds of knocking on the doors of people who live in the Zone have yielded a group of 150 NAZ parents, many of whom are facing some of the toughest challenges. Seventy-five percent of the families make $10,000 or less per year.

Some of them have moved there from places like the Southside of Chicago or Gary, Indiana, but many others were born and raised in North Minneapolis. During a focus group, NAZ parents were asked why they came to North Minneapolis. All said they came in search of better schools, safe neighborhoods for their children, a strong community and job opportunities.

Samuels says that their stories have given her a new perspective. They came in search of a community “they expected to meet, one that is encouraging and supportive and helps to remove barriers that straight-up get in the way of people who are most trapped in poverty.”

Though immigrant communities have services that are designed specifically to meet their needs, this is not the case for African Americans who moved to the North Side, many with few other family members. “[Most of us] wouldn’t be able to get out of some of the traps and snares that are created for people in poverty,” says Samuels.

“It’s not as easy as one thinks to just break out. But these families want it, and they are making it happen.”

Along with door-knocking efforts, NAZ families came by way of three initial anchor schools — Harvest Preparatory, Nellie Stone Johnson and Hall. The families were recruited by NAZ “connectors,” community engagement members who work to ensure that they have all the supports they need to end a cycle of multigenerational poverty.

“What the experiment is,” Samuels explains, “is if we are changing everything about a child’s life at the same time, we believe it will change their outcome. And if we do that for enough kids…at some point the families and the children that are in the pipeline become kind of the tipping-point families. At some point their success — their culture of achievement — informs the rest of the community.”