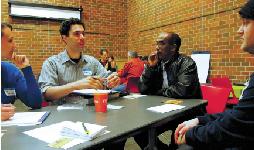 If you’ve ever found that a home fix-it job was twice or three times as expensive as predicted because you decided to buy tools you may never use again, you’ll appreciate the Northeast Minneapolis Tool Library.

Lawn mowers, snowblowers, sheetrock lifts, plumbing and tiling tools, car ramps and maybe even a commercial sewing machine are just a few of potentially thousands of tools that could be available. The six board members behind this effort are so serious about making it happen, they’ve agreed to lease a 700-square foot space in the Thorp Building and plan to open in spring.

A $35,000 grant from Windom Park Citizens in Action seeds the non-profit venture, and to sustain it, those who use it will pay an annual membership (about $60) to defray maintenance, rent, and other costs. Members will be able to check out tools for use for perhaps a few days or a week at a time. Grants will be sought to buy more tools and offer education. There will be paid staff.

At the second public meeting on the subject, reasons for getting involved illuminated the benefits of tool lending. It’s consistent with shared economy, same as bike sharing or car sharing or airbnb, the online tool for finding unique local places to stay. As Tom Durfee, one of the board members, said, “I’m an economist, and we say that which is not being used, is a waste.”

Others see it as a way to keep property values up by encouraging new homeowners to learn maintenance methods and make it easy for people who don’t have the money to hire things done, to learn to do it themselves.

Some of the about two dozen people who attended had experience with, for example, the Grease Rag women’s bicycle maintenance cooperative, or shared “maker” spaces where people use expensive machinery on-site. That is a possibility at the new tool library.

It should be pointed out, while the group happened to meet at the Northeast Library, the word “library” simply refers to the idea of checking out tools for a period of time, there’s no actual connection to the book-lending system.

Some people attended the meeting to offer expertise. Pat Kartes said he and his wife renovated their entire home, a former tavern, and he’s been a tool and die machinist. “I still have all my fingers.”

Katheryn Schneider posed the question whether members might be able to join by donating their own excess tools.

Tool lending libraries are not new. They’ve been found for decades in communities where many homes need fixing and resources are stretched. A group in West Seattle has developed software to allow participants to check availability, with instant bar-code checkout and soon possibly a phone app. The Northeast group has many models to follow.

As the discussion broke into small groups, one of the most popular was Tool Acquisition, thinking of categories and specific tools to carry. Some were nixed, for example anything gasoline-powered, and others were starred that would need special training to avoid injury. Users will sign liability waivers, of course.

They wanted ideas on service area, limited for now to Northeast but perhaps charging more for memberships from people in nearby areas eventually. They asked whether people would care about grant sources; would there be any entities that there would be a philosophical reason not to approach. At one table they were listing potential partners, individuals or groups to reach out to for publicity, events to attend.

Participants were encouraged to compile lists of resources such as maker spaces, art co-ops, bike co-ops and other places to find highly-specialized categories of tools, classes, etc. to which people can be referred if the tool library doesn’t carry or doesn’t have enough of those tools.

The tool library will likely have free or low cost bins full of gloves and other expendables. One suggestion was to collect and offer leftover caulk, tile spacers, pipe wrapping tape and similar supplies for people to take, use a bit, and then return.

To contact the Northeast Minneapolis Tool Library, call 971-222-9118, Thomas Ebert, Tool Librarian, or email: northeast.mpls.tool.library@gmail.com. Website is not set up yet but will be www.nemtl.org, Facebook page is NortheastMinneapolisToolLibrary.