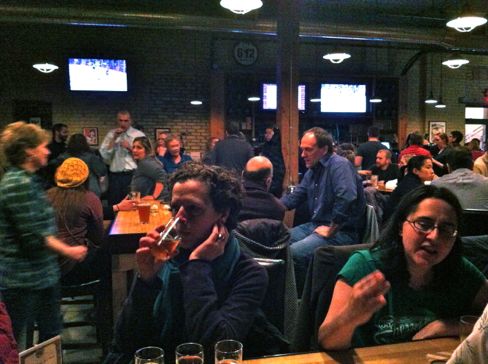 Busy scene at 612Brew on a Friday night

I came late to the Northeast Minneapolis taproom party—so late that I almost didn’t get in. The first taproom in northeast, Indeed Brewing, opened back in August, but I didn’t get around to touring the new tasting rooms until last Friday. It was one of those spur-of-the-moment things. The first stop on the planned itinerary was Dangerous Man at 1300 2nd Street N.E. The Dangerous Man website advises, “Pick up an Element Pizza, a sandwich from Maeve’s, some Anchor Fish and Chips or just bring in your leftover Chinese. We love food, we just don’t make it.”

So, on our way to the brewery, we stopped at Element Wood Fire Pizza, 96 Broadway Street N.E., and picked up a namesake Element pizza—topped with sun-dried tomatoes, roasted eggplant, arugula, and basil—and a Caesar salad. The pizza was made to order while we waited, which took all of five minutes, including less than two minutes in the wood-burning oven. The elements of Element are pretty basic: a few tables and chairs, a pretty standard selection of pizzas and salads, and a limited list of wines and beers. Interesting factoid: it’s owned by the same family that formerly owned the Istanbul Bistro in Minnetonka.

We grabbed the pizza and a Caesar salad and headed for Dangerous Man, only to discover a line of customers out the door and a very tall bouncer barring their entry. The taproom was filled to capacity, we were informed, and we would have to wait in line until enough customers left the building. How long that would be wasn’t clear, but it was clear that by the time we cleared the line, the pizza would be frozen solid.

So we hopped in the car, where Carol helped herself to a slice—no point in letting good pizza get cold—before we headed to our next destination, Indeed Brewing. Hidden away in an industrial zone, next to a railroad track, Indeed can be a little hard to find, at least in the dark. We did manage to get in the door at Indeed, but just barely—the one big barroom was packed with beer drinkers having a good time. We elbowed our way to the bar and ordered two of the beers on tap: a dark Stir Crazy Winter Warmer brewed with raisins and brown sugar, and a double-hopped cask-conditioned version of their Day Tripper Pale Ale. 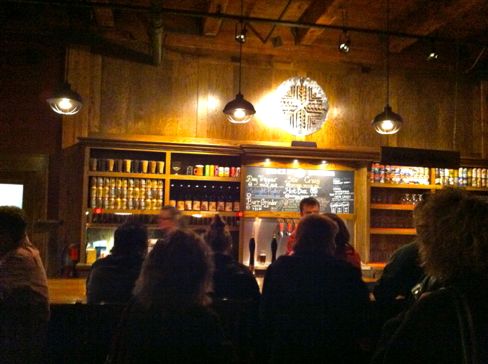 The Stir Crazy left me cold, but I have never been a fan of dark beers (with the notable exception of Guinness). The cask-conditioned Day Tripper, however, was outstanding—lots of aromatic hoppy bitterness, and served at cellar temperature, which really brought out its flavor. I have been on a never-ending quest for ale brewed and served in the proper English manner: warm, flat and weak. (Or more accurately, cellar-temperature rather than chilled, with no added carbonation, and low enough in alcohol that you can drink a good number over the course of the evening and still stagger home from the pub under your own steam.)  Day Tripper, at 5.4% ABV, was a little too high in alcohol to be a true session beer, but on all other accounts, it was just about perfect. After a little wait, we did manage to grab a couple of seats at a table, and polish off the pizza and salad.

None of the new taprooms have their own kitchen, but Indeed invites food trucks to stop by, and last Friday night, there was a big red Stanley’s on Wheels truck selling pulled pork and beef brisket sandwiches from Stanley’s North East Barroom (which, by the way, has the most impressive urinals I have ever seen). Check Indeed’s Twitter feed to see which truck they’re featuring when you visit.

Indeed’s Day Tripper and Midnight Ryder Black Ale are available in cans at dozens of locations around the Twin Cities. Taproom hours are Thursday and Friday: 3 p.m.-11 p.m.; Saturday noon to 11 p.m. 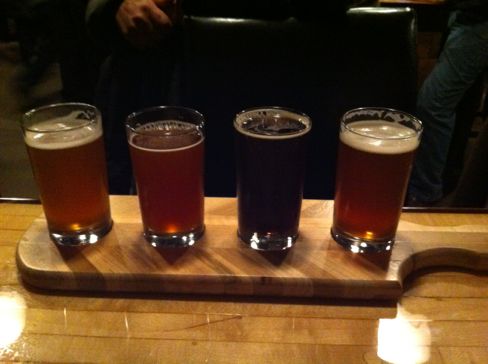 Onward, to Northeast’s newest taproom, 612 Brew, located in the back of the Broadway Building, 945 Broadway Street N.E. Here, too, a huge hipster crowd and lots of decibels. We grabbed the sampler—four half-glasses of the Six American Pale Ale, Zero Hour Black Ale, Rated R Rye, and Main Stage Amber Ale for $11. This might have been just bad luck, but I can’t say that any of the four brews I sampled really hit the spot. Or maybe it was just that Indeed’s cask-conditioned Day Tripper at Indeed was a tough act to follow. I might have fared better with the Bitter Cold Winter IPA Series #1, which was not included in the sampler. The highlight of this stop turned out to be spotting Nate Beck selling his superb Natedogs tubesteaks ($3) from his cart in a dark corner of the room. (Like the food trucks, Nate changes locations from day to day and week to week; check his current whereabouts at https://twitter.com/Nate_Dogs.) An outdoor patio is planned for the spring. 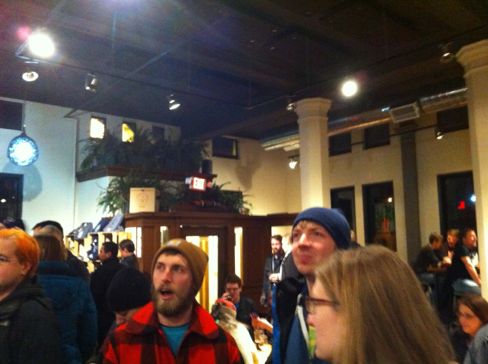 Finally, we headed back to Dangerous Man, and this time there were only three people in line ahead of us, so the wait was no more than a minute. Once again, an enormous room packed with people having a good time and drinking a lot of beer. Dangerous Man felt maybe a notch more mellow than the other places, maybe because the one big flat screen display in the room was turned off, and the soundtrack wasn’t amped up to the point of drowning out conversation.

The Cream Ale was mild and pleasant, but the real surprise here was the Chocolate Milk Stout. Except for some of the traditional Belgian beers, which date back to the Middle Ages, I tend to be a purist and a snob about flavored beers. (Sort of like flavored coffees—people who appreciate good coffee don’t doctor it up with flavor extracts.) But the Milk Chocolate stout was a treat—not sweet, and with just the right hint of chocolate.