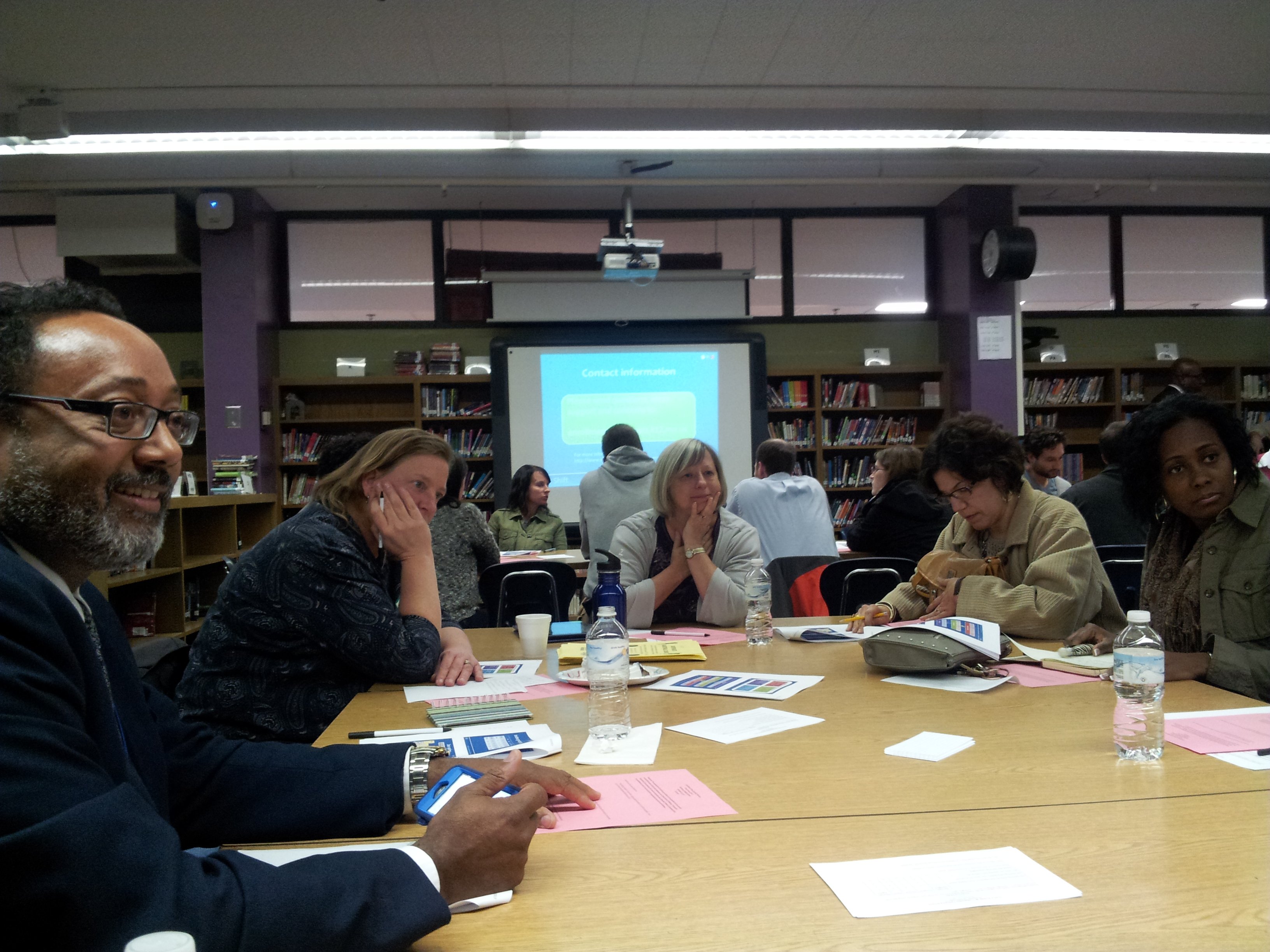 Parents and community members filled the Northeast Middle School Media Center to listen to Area A Superintendent Michael Thomas explain, using a PowerPoint presentation, the district’s new five-year plan and how it would impact their neighborhoods. Following Thomas’ presentation, people split into groups consisting of one district employee and five or more attendees.

Anchoring one of these small groups was North High School Senior Academy principal David Branch. Branch expressed support for the proposed new early childhood centers, one of which would be located at North High School. Bringing young children into the building would be a good fit for North, Branch said, and would give older high school students a chance to gain valuable skills, and offer their services, by reading with the younger children.

The district’s efforts to bring more focus to young children brought both hope and concern for downtown Minneapolis resident Denise Holt. Holt, who does not yet have children, was at the meeting as an advocate for the growing neighborhoods of downtown Minneapolis.

During the evening’s small group session, Holt made the point that there are close to 1,000 children under age five currently living in downtown Minneapolis, and she wanted to be sure that this area of Minneapolis was going to be included in the district’s new enrollment plan. Holt’s view was that, with vibrant areas such as the North Loop neighborhood in need of a strong, clear public school choice, young families would start to leave the city.

There is, in fact, a newly formed group that calls itself the “Downtown School Initiative.” This group sent a letter to the school district on October 13, in anticipation of the next day’s Area A Five-Year Plan meeting, saying that the group wanted downtown neighborhoods to be included in the district’s new plan, as one cohesive group.

Holt and two other representatives of this downtown group were pleased that the district seemed to have read the letter before the meeting, as they noticed that a new slide, which made direct reference to the downtown neighborhoods, had been added to the PowerPoint presentation.

Along with the downtown group’s concerns, others in attendance expressed concern over a couple of main issues. One was the fact that parents did not see class size addressed in the district’s new plan, leaving them to wonder how all of the proposed changes would alleviate overcrowding in some schools, such as Marcy Open, or sustain some of the area’s proposed new magnet schools, such as the Cityview “STEAM” program. One parent asked, “What is the optimal size needed for a school to offer a quality program?”

On a related note, many parents seemed to feel that Northeast’s high school, Edison, was left out of the district’s new plan, with parent Debbie Nelson asking, “What are we doing for Edison to make its enrollment grow?”

For example, the district is considering putting a new program in at nearby Tuttle School, which would consist of a “9-16” high school and post-secondary campus. Why not, a parent asked, locate this program at Edison instead? North High principal Branch immediately responded, calling that an “excellent question.”

There will be one more community “listening session” on the Five-Year Enrollment Plan.