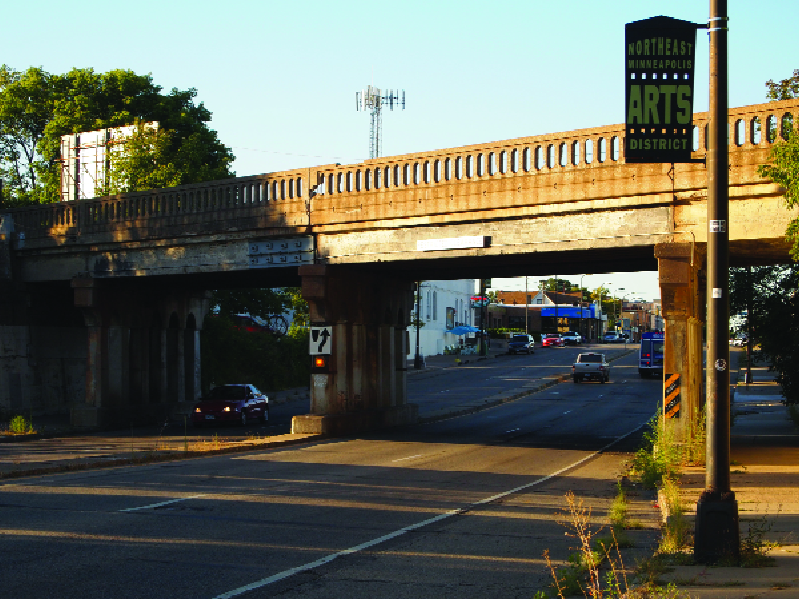 The Minnesota Department of Transportation (MnDOT) owns the deteriorating railroad bridge over Central Avenue just north of 14th Avenue NE, and the Burlington Northern Santa Fe Railway (BNSF) owns the railroad tracks on the bridge and on both sides of it. As MnDOT and BNSF negotiate terms of how the bridge will be replaced, local business people are looking at the possibility that Central Avenue—between 14th and 18th avenues—will be closed for at least several months next year.

Later this month, residents and business people will have a chance to weigh in on the project. A public meeting is scheduled for Thursday, Oct. 24, 4:30-8 p.m. in the multipurpose room at Logan Park, 690 13th Ave. NE.

Anticipating the bridge replacement, MnDOT left out the stretch from 14th to 18th avenues when re-surfacing Central Avenue last year. In addition to replacing the existing bridge, they plan to rebuild the roadway under the bridge and improve the vertical clearance for tall vehicles.

Current MnDOT plans call for closing Central between 14th and 18th, from May (right after Art-A-Whirl) until the project is done, which officials now say will be late 2014. Before the bridge work begins, MnDOT plans to build a “shoo-fly,” a mound of dirt across Central Avenue, as high as the railroad tracks on the existing bridge. A temporary set of tracks would be built on the shoo-fly, so BNSF trains can cross Central during construction. This would block any through traffic on Central, and planned detours would begin at Broadway to the south and Lowry to the north.

At a Sept. 11 meeting at Logan Park, several local business people questioned the need to close Central Avenue for the project, and did not appear happy with the answers they received.

One concluded, “The illusion is that we have a say in this.”

Ron Rauchle, a MnDOT engineer who has spoken for MnDOT at public meetings on the project, said BNSF rejected any plans that would keep Central open. He said railroad officials would not consider re-routing trains for the project, and objected to the idea of a temporary bridge. “BNSF said they’d fight that,” he said, because of concerns that an errant vehicle might strike the temporary structure. He also said keeping Central open that way would extend the project into two construction seasons, and that even if a temporary bridge were built, they could not provide enough clearance for truck traffic and trucks would have to be re-routed.

BNSF spokesperson Amy McBeth told the Northeaster that BNSF would not consider re-routing trains, but indicated that the temporary bridge idea might be acceptable.

Asked what BNSF would do if an emergency made the bridge impassable, she said BNSF would reroute trains, and would do whatever was necessary, in the short term, to get the crossing up and running. That’s not the sort of effort they can keep up for several months at a time, she said.

“When re-routes occur, it’s for a very limited time,” she said. Removing that crossing, she said, is “taking out half of our capacity” to connect to major routes that lead from Chicago to the Pacific Northwest, as well as many local routes.

Regarding a temporary bridge that would keep some automobile traffic on Central, she said, “We would certainly take a look at that. That would add to the length of the project and the cost.”

“The vertical clearance would change,” she said, “and that presents challenges,” including safety issues, with people passing under the bridge.

Rauchle said MnDOT would consider a maximum-speed construction schedule, but that it might run afoul of local noise regulations. First Ward Minneapolis City Council Member Kevin Reich said he would talk with residents and local organizations. “I would green-light it,” he said, if he found a consensus in favor of easing noise restrictions during the project.