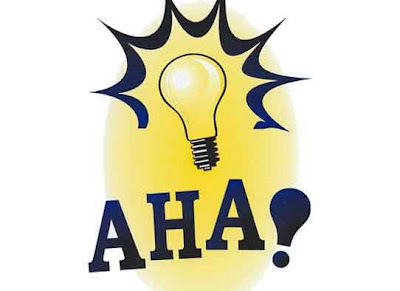 Part one: The back story

I take guitar lessons, and in those lessons I frequently have what my guitar teacher calls an “Aha! moment.” That’s when I see a pattern in a chord progression, or learn a new aspect of music theory, and apply it to the music I’m listening to or learning to play. Whether it’s learning a new aspect of the geography of the guitar or finding out that every single pop song can be played with the same four chords, Aha! moments open up a whole new way of understanding what it is I’m doing, and can even fundamentally change how I approach my lessons.

Over the past week, I had such a moment in how I view the topic of (cue ominous, scary music here) race relations. To really understand the Aha! moment about race, here’s the back story: Shortly after the shooting death of Terrell Mayes Jr., a community brainstorming session was held at the Warren on 44th and Penn. That event was heavily promoted through the Get to NoMi Facebook page. That page, which had roughly 1100 – 1200 members at the time, grew to almost 1500 as people kept coming to the site to talk about north Minneapolis issues. It was even mentioned in an NPR piece about transit as a place where people in north Minneapolis were coming to interact.

Much of the discussions centered on racial issues. Those exchanges weren’t always pretty, but I (eventually, at least) found it fascinating and exciting that they were happening at all. Not everyone felt this way, and some people were disappointed that the Get to NoMi page was no longer being used as this feel-good northside business promotion site. The administrators, in a move I feel was ill-advised, opted to take the page down. The discussions have now shifted over into the North Talk Facebook page.

I was tremendously disappointed to see Get to NoMi get removed in the way that it did, because I had my “Aha!” moment there. Before the moment of revelation though, I had to really make a fool of myself. That happened when I came home one evening a few days after the brainstorming session. I had been reflecting on the fact that the session, although attended by a mix of people, was made up mostly of White residents. The vigil for Terrell was attended by a majority of Black residents. I lamented this disparity on the Facebook page, and asked what it would take to get both kinds of events to be more reflective of our community in north Minneapolis. As part of the exchange that followed, a fellow northsider named Roxanne called me a racist, and took great offense to that.

In fact, I took such offense that I said some not-so-nice things myself and then blocked her on Facebook entirely. Perhaps that wasn’t the wisest move, but at the time I felt I could not engage in a broader dialogue if the two of us were just going at each other’s throats.

So we kind of danced around each other’s postings on the Get to NoMi site. I couldn’t see what she wrote, and vice versa, unless someone else showed the posts to us. Roxanne started to send out a change.org petition on the Northern Metals pollution issue (more on that later, folks – we still need your help there) and friends and neighbors kept telling me how this woman was signing people on left, right, and center.

And one of my guiding principles is that I always want to make sure people know that what they do is appreciated. This is especially true for the people with whom I am at odds with. So when I heard this about Roxanne, I made a mental note to myself that the next time I saw her in person, I would just say “thank you.” I wasn’t expecting anything beyond that. When I did see her, I said, “Roxanne, I hear you’ve been doing a lot of great work around the Northern Metals issue in my community. I just want to say thank you, and I want you to know that means a lot to me and that I appreciate what you’re doing.”

She said, “You know, we got along before all of this, right? We can just be friends.”

If you want to reconcile with someone and that person says we can be friends, the only real response you can make is “Yes.” So I kind of mumbled that.

And then Roxanne did probably the thing I was least expecting when she asked, “Would you like a hug?”

Who says no to a hug, right? So of course I said yes. We hugged, and while that wasn’t the “Aha!” moment, it did trigger something in my brain. When I went home that night to start reading the community discussion threads on Facebook, that hug planted the seed that allowed me to start looking at things in an entirely new light. 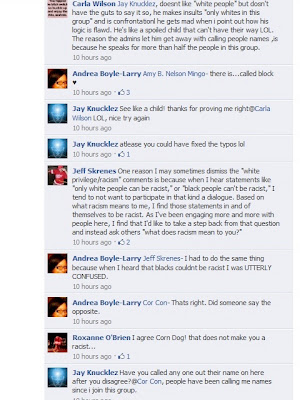 After getting the surprise hug, I went back to the discussions on race on the Get to NoMi page. For some reason, I just started viewing them in a new light.

Left: Screen grab of an Aha! moment (by Jeff Skrenes)

Now prior to my newfound way of seeing things, I would read phrases like “Only White people can be racist,” or “Black people can’t be racist,” and that would just send me into a tizzy. Because clearly I know I am not a racist, so anyone saying these things must not know me, and maybe they are a racist themselves. So I felt the need to either disengage entirely, or to prove that they were the problem, or to show off my non-racist credentials:

I lived in Honduras, I speak fluent Spanish, I was married to a Cuban, when I did mortgage loans, most of my business was either Latino or African immigrant clients. I attended a bilingual (Spanish/English) and bi-cultural (Latino/Scandinavian) church, where I became president of the council for a year. My best friend is Laotian, I’ve worked on Hmong issues in Hawthorne and helped fill up Farview Park several times for Hmong community forums, and I helped get a Hmong-speaking police officer on the day shift in our precinct. I did mission work in Tanzania, I now attend a Liberian/Scandinavian church where again I am council president. I really honestly do have close friends from pretty much every census demographic, so much so that whenever we go out to eat at a suburban Applebee’s, the restaurant manager begs to take pictures of our group for use in their promotional materials. I once saw this movie where Morgan Freeman played the role of God and I wasn’t even offended.

(Those last two are jokes, by the way. My friends usually don’t go out to eat in the suburbs. And Bruce Almighty did offend me, but that was Jim Carrey’s fault.)

My point here is that by getting so defensive over things, what I was really saying was…

“Why can’t this one group of people realize what an amazing, culturally sensitive guy I am???” I hope readers can appreciate the absurdity of that viewpoint.

The second light that went off was in regards to the role of the provocateur. To demonstrate this, I’m going to compare Johnny Northside and some of the recent statements on various Facebook pages. When John Hoff started to take off on his blogging adventures, there were a great many of my friends and acquaintances who said, “Finally! Someone who’s saying the things we’ve all wanted to say for YEARS!” And the fact that Hoff was so brazenly in your face about his blogging, and that he was saying things in such a controversial way only added to our approval. If Hoff had merely stated certain things as if he were reading a weather report, that would not have drawn the same kind of attention as his provocative style. Part of the success of his message (whether you agreed with him or not) was in the delivery of that message.

But then when others have made similarly provocative statements on discussion threads about racial issues, many people (myself included) reacted much in the same way as those who viewed Johnny Northside in a negative light. We became focused on attacking the provocative element of the message instead of taking a deeper look at the truth within the message itself. The discussions often regressed into a back-and-forth over the characters and motivations of those posting comments instead of a deeper look at the issue before us.

The racial aspect of such a disparity hit me like a load of bricks. A White provocateur, saying things from a White perspective, drew cheers from (not only, but for the sake of this analogy) White people for saying what White people thought needed to be said. But when a Black person was doing virtually the same thing, only from their perspective, the same people focused on the delivery of the message instead of being glad that the message itself was delivered. I realize this description is simplified somewhat, but it’s the best I can do to describe the dynamic of the provocateur.

This comparison isn’t meant to support one side or another in regards to the provocateur, but has made me start to evaluate how often I, and others, have been utterly blind to the ways in which provocative statements have been received. There is much to reconsider here.

Similarly to those “magic eye” posters with a repeating pattern and an underlying image, I began to look not directly at such comments, but through them to the message beneath. If nothing else, I wanted to start by accepting that what was being said was reality for the person saying it. In so doing, I no longer had the need to subconsciously defend my own point of view or to change another person’s mind. When THAT happened, suddenly a whole new vision of reality came into view. These contentious dialogues no longer felt like a battle over who is right or wrong, but instead became something akin to a set of glasses that one could look through to better see and understand our neighbors.

That was my Aha! moment, and it transformed how I looked at recent discussion threads. I could now read a post with 100+ comments going back and forth about race, and pick out the two or five interchanges that really meant something for a few people. I wasn’t hung up on what might look like discord to others because I could see the seeds of growth and understanding that were being planted though that dialogue. And that positive dialogue simply would not have happened if people weren’t given a space where things could get “messy.”

The Aha! moment has led to another realization that was as unexpected as a surprise hug. When I had been more defensive about my positions on topics about race issues, the prospect of changing my mind somehow was seen as a tremendous burden. But once I started to look at things differently, what I thought of as a burden has instead transformed into the most freeing and uplifting mindset I’ve had in years. The closest I can come to describing it is the sensation from when you were a child and afraid to jump into the deep end of a swimming pool. But when you finally did it, you found out you could swim after all.