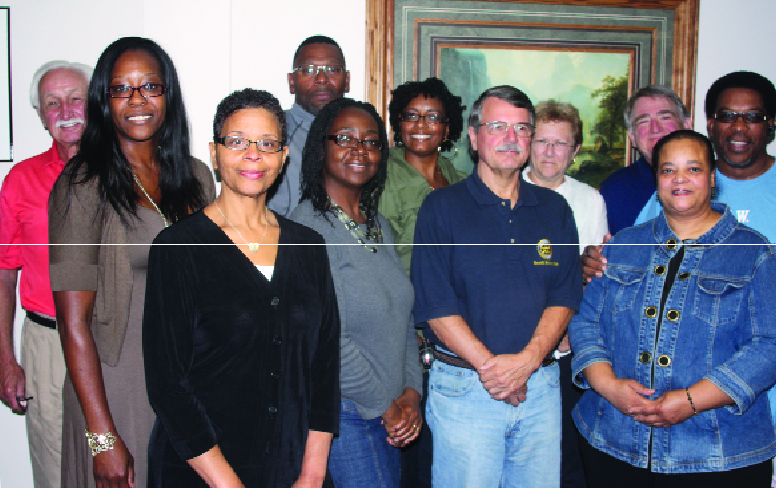 North Minneapolis will have its own Rotary Club.

Various Rotary clubs have come in to do service projects in North Minneapolis, and while “it’s a good area to do service, there are also capable people who can serve in their own community,” said Ann Dillard, President of the Rotary Club of Plymouth. “Rotary is a huge organization, clubs support each others’ ventures, but the initiatives need to be organic.”

That’s why, when the time seemed right, Dillard helped to launch the Rotary Club of North Minneapolis. She’s a diversity training and education consultant who frequently works in North Minneapolis. Her husband Joseph Dillard grew up here. “I was attending this year’s President Elect Training Seminars when the then District Governor Bob Stowell stated that he wanted to add at least two new clubs,” she said. “I recognized the opportunity to make this a reality and then solicited the support of the other clubs.” She said she also thought it appropriate to start in a year when the international focus is “Peace through Service.”

The Wayzata, City of Lakes, Minneapolis South, Plymouth and Anoka clubs are all sponsoring the new club, which started meeting at the Workforce Center, then graduated to the Minneapolis Park Board headquarters thanks to Park Commissioner Jon Olson. After outgrowing that space, they are now meeting at North High School in the Alumni Room every Tuesday at 7:30 a.m., and have almost reached their goal of 25 charter members. Beyond those charter individuals, a club grows by having others recommended in by the original 25; and so on.

The official tagline defining Rotary is “an organization of business and professional leaders united worldwide who provide humanitarian service and help to build goodwill and peace in the world. There are 1.2 million Rotarians in 33,000 Rotary clubs in more than 200 countries and territories living by the Rotary motto, Service Above Self.”

Each club decides how to focus their service. Plymouth, for example, raises funds for scholarships and food for low-income families. They also promoted a heart-safe community training all club members in using AED and CPR, automated external defibrillators and cardiopulmonary resuscitation.

For its first service project, the North Minneapolis club plans a West Broadway cleanup, adopting six blocks and hoping to recruit others to each adopt another six until the whole street is accounted for with a minimum of four cleanups per year. It is also anticipated that there will be ways to partner with North High School beyond meeting there.

Natalie Johnson Lee is the North Minneapolis Rotary Club President; Bishop Richard Howell is President-Elect, Dr. Tara Watson Vice President, Susan Smith Secretary, Elyse Dornhecker Treasurer and Velvet Callender, Sergeant at Arms. Jennifer McDonald is Service Chair. They will serve until July, at which time the officers from secretary on move up one notch—the leadership track requires a multi-year commitment. Lee will then be Immediate Past President. The Rotary organization provides formal leadership training as well as learning by doing.

Richard D. King, Rotary International President in 2001-02, is quoted on a recruitment flyer, “He profits most who serves best.” Often the first thing a business person thinks of when they hear about a group, is the opportunity to promote their business or to network. Dillard and Johnson Lee said networking naturally happens at Rotary because members get interested in each other as they see that they share the same ideals.

The need for friendship and fellowship was one of two reasons Rotary began in 1905, according to the flyer. “The second original reason for Rotary’s beginning is business development. Everyone needs to network. Rotary consists of a cross section of every business community. Its members come from all walks of life. Rotarians help each other.” To be professional means taking part in the growth and development of his or her own profession or vocation, serving on committees, and teaching youth about one’s job or vocation.

The public image has been changing over the years. Johnson Lee said, “it’s not just about old white guys meeting for lunch.” The group is non-political; if politicians speak it will be for information.

A former Minneapolis City Council Member, Johnson Lee is now consulting on projects including Girls in Action, a project started by Dr. Verna Price involving personal power, service learning, career building and leadership development for high school and now middle school girls. Her friend and collaborator Ann Dillard asked her to sit in on a Rotary meeting and others recruited her to be interim/temporary leader. Then she agreed to be president of the Provisional Rotary Club of North Minneapolis.

What does it cost to be a North Minneapolis Rotary club member? Dues are $200 for the year, to help defray costs, including coffee and sometimes pastries, for the weekly meetings. Local membership also ties a person into the district and international club operation. A person applies and has to be approved by the club’s board of directors.

The club’s service project focus “will create opportunities for people to give, the opportunity for every individual to express themselves fully in capacity of service,” Dillard said. Johnson Lee said that could mean giving money, time, or both; there’s no set dollar amount. “Some people say ‘I’m too busy but I’ll write you a check. Some may have a knack recruiting other people and getting them to give.”

Johnson Lee and Dillard said other clubs have much higher dues, usually because they incorporate a meal. “We will not be a breakfast club, or a lunch club, or a dinner club. We want to be conscious how we introduce it to the community.”

Members don’t have to live in the area, they can work in North Minneapolis or have other ties. “We will be bringing in speakers for information that will help us define” who we’re going to be, Johnson Lee said. For example, Elizabeth Lasley, the Community Education Coordinator at North High, has updated the group, and they brought in school principals Dr. Shawn Harris-Berry and David Branch.

Prospective members should contact Natalie Johnson Lee at 612-986-8037 or email nataliejohnsonlee@gmail.com to confirm the meeting location (as the group grows they may move around on campus). One can try coming to a meeting or so before deciding to apply. “I’m a strong encourager,” Johnson Lee said.

For more information about Rotary International, go to www.Rotary.org.