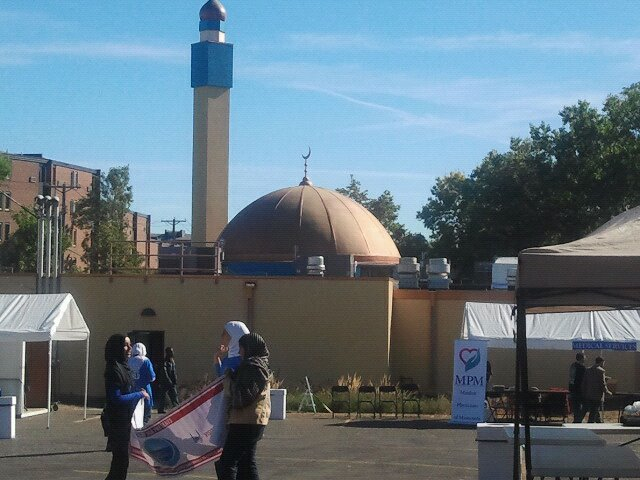 Day of Dignity has been a national annual event for years, but Saturday was the first time the event was celebrated in north Minneapolis.  More than a thousand people participated in the Day of Dignity that featured a free outdoor concert and medical clinic with HIV testing and also provided free food and clothing for the needy.

Day of Dignity came a few months after the deadly May tornado hit north Minneapolis damaging hundreds of homes and leaving many people injured. The event was organized to assist displaced residents and give them resources to get back on their feet, said Sakinah Mujahid, co-lead coordinator for Day of Dignity.

The north Minneapolis mosque has a long history of community service, serving as the spiritual base for Minnesotans such as Congressman Keith Elison, basketball player Khalid El-Amin and hip-hop artist Brother Ali.

“A lot of people don’t get the opportunity to hang out here in north Minneapolis,” Brother Ali said, who performed live music for free, making it the first Day of Dignity event in the nation to have a concert. “We’re just trying to provide opportunities for people to get together and be together.”

“We, as Muslims, according to the Quran, we are supposed to share, and give charity to people whether they’re Muslim, Christian or Jew,” Mateen said.

For 61-year-old Travis Derek, who is unemployed, the Day of Dignity event provided a chance to become hopeful. Derek received free clothes, food and health supplies. Free school supplies and barber services were also part of the day.

“It will help,” Derek said. “The economy is so bad that everybody needs help.”

Elected local officials and religious leaders spoke at the event with everyone emphasizing the alarming poverty of the north Minneapolis communities and the devastating effects of the tornado.

“It’s especially important that people from all walks of life see the continuity of and the unity in north Minneapolis as it pertains to religion,” Pastor of New Salem Missionary Baptist Church, Reverend Jerry McAfee said. “Our problems are not a religious problem, our problems is poverty and it does not have a face, be it Islamic or Christian.”

“The need is certainly great. The tornado was the punctuation point of a long, difficult time in the north of Minneapolis,” said Sherman Patterson, City of Minneapolis. “With the foreclosure crises and people out of their homes in great need, the city is grateful when individual organizations step up to the plate and begins to take leadership [to bring relief] to the needy.”

Fifteen other states nationwide also celebrated the Day of Dignity on Saturday.