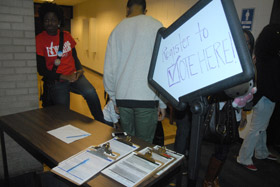 Youth in the community are more engaged in politics than people may realize.

Collaborative efforts to engage the community in the voter ID amendment and assist with voter registration, while viewing music performances and a basketball game, were comprised in a showcase, Ballin’ for the Ballot. 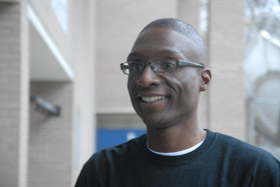 “We noticed that a lot of youth in our community were not really aware of the issues that would be on the ballot. You see the signs in the yard, bumper stickers and commercials, but nobody really knows what ‘Vote No’ is. We thought it would be a good idea to place everyone at the same vicinity at one time to give them some awareness,” said Buckner.

During the basketball game, North High Alumni and other community members walked around the gymnasium with clip boards, getting people registered to vote and to petition against the voter ID amendment.

Buckner said because of the final registration date of Oct. 16, it was perceived that most people would say they already were registered, but that was not necessarily the case.

“What surprised me the most was the amount of people that are registering to vote today,” said Buckner.

State Rep. Champion, who represents 59B and is running unopposed for the state senate, said finding creative ways to get people interested and aware of voting is important to the community.

“I spoke with young people and we collaborated together to create an event that people would be attracted to and have all the things are aware of when it comes to voting,” said Champion.

Champion said in addition to the youth, other collaborative partners include State Sen. Jeff Hayden, Cory Day, The Stairstep Foundation, and We the People United.

“We all came together to make sure this event could happen,” said Champion. 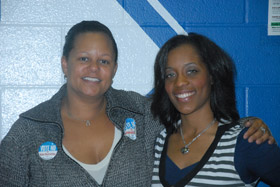 Krishana Brown and Kerry Jo Felder, two field organizers for Our Vote Our Future, were part of the raising of awareness regarding the voter ID amendment.

“Surprisingly enough, a lot of people do not have a full understanding on how it would affect them,” said Brown.

“If I was a college student out of state, and my ID is not registered in that state, I would have to go home to vote. If something happens to your license or ID, you would be restricted also. It is unfair,” said Brown.

Felder says the efforts are proving that people are becoming more aware of the amendment and why it is important to vote no.

“We started out with 82 percent (saying they were) voting yes in the early spring, to only 51 percent last week. We have had a 40 year history of same day registration in Minnesota and zero percent voter fraud,” said Felder.

Felder also says that the amendment is not necessary.

“This is something to disenfranchise people politically,” said Felder.

“We want to make sure people are seeing the positive side of what we do here in North Minneapolis in order to make sure we get our people to vote,” Champion said.

In 2010, Buckner and Horshaw, started hosting basketball jamborees in the community called Keep the Peace.

Champion says with the success of the event it will be something to continue in the future.

“Voting is a right, not a privilege and we want people to exercise their right to vote,” said Champion.