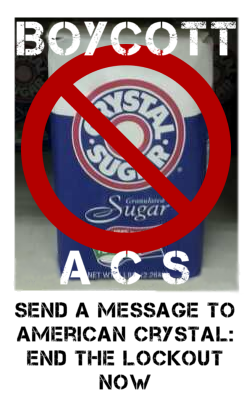 In a 3-2 decision, the North Dakota Supreme Court ruled yesterday that locked-out American Crystal Sugar workers are owed unemployment benefits. Total benefits owed to workers may be $4 million dollars, but some fear the state legislautre may act to block the payments.

More than 400 American Crystal Sugars workers in North Dakota who are locked out in a contract dispute are eligible for unemployment benefits, the state Supreme Court said in a ruling issued released Tuesday.

The decision reverses a lower court’s ruling that said the workers were not eligible for benefits from Job Service North Dakota because state law prohibits unemployment insurance for workers involved in labor disputes. Nearly 1,300 American Crystal Sugar workers in North Dakota, Minnesota and Iowa, have been locked out since Aug. 1, 2011, after their union rejected the cooperative’s proposed contract.

The workers’ attorney had argued that the “labor dispute” language referred to situations in which the workers withheld labor, which was not the case with the Crystal Sugar workers who wanted to work but were locked out, he said.

Darren Brostrom, Job Service North Dakota’s unemployment insurance director, did not immediately return a message seeking comment. He earlier said that if the court ruled in favor of the workers, they would get $4 million or more in benefits.

Representatives of the locked-out American Crystal workers applauded the decision, welcome news for workers who have been away from their jobs for 1½years.

“I think we need to have a little celebration,” said John Riskey, a local union president who was driving to Drayton Tuesday evening to talk with other union leaders about their next step in light of the decision. “I guess justice has been served.”

Alecia Heiser, a former lab and utility worker at the Drayton plant who was at the meeting Tuesday night, said that while details were in short supply, it gave her a renewed sense of hope. Heiser said she found full-time work briefly at a restaurant in Drayton after the lockout but had since been forced into part-time work there and at other businesses.

“Very exciting,” she said of the decision. “I’m glad things are turning around.”

Many workers and their families have experienced hardships resulting from the involuntary work stoppage, said Daniel Phillips, the Fargo lawyer who represented the workers.

“Now this is a salve over a very raw sore, but it’s still a very nice salve,” he said.

However, the lawyer worries that the Republican-controlled legislature may think that the workers haven’t been punished enough:

More worrisome, because the North Dakota Legislature is in session, lawmakers could pass a law negating the effect of Tuesday’s decision, Phillips said.

“I’m very happy with the outcome,” he said. However, he added, “I don’t know how long this decision is going to matter.”