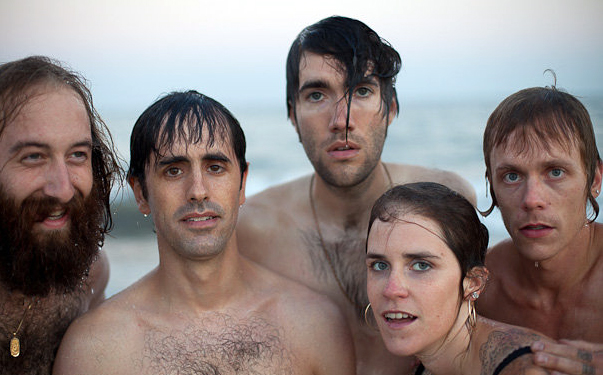 On October 3 and 5, Dark Dark Dark will be celebrating the release of their newest album Who Needs Who. Nona Marie Invie took a minute to chat with me about the new album and the Minneapolis music scene.

How did you come up with the name Dark Dark Dark?
Awh that’s a Marshall thing. Marshall was trying to make a joke out of something.

Over your career, has there been one band or artist that you get the most comparison to?
People have, in the past, compared us to other accordion bands. Beirut and Devotchka and stuff like that. Which I feel like are pretty different than the music that we actually play.

How well do you feel the Minneapolis music scene supports you and other indie artists’ music?
I think that it’s great! We, we don’t play here very often because I’m the only one who lives here but when we do people are really excited about our release and it feels great to be able to play for everyone.

If you could play any destination or venue in the world, where would you play?
Where would I want to play? Maybe on a cruise ship in the Bahamas.

What’s been your biggest inspiration lyrics-wise for Who Needs Who?
Just having time in my life to be quiet and to figure some things out.

Did you mainly write the lyrics or did other members of the band pitch in?
Yeah, I write most of the lyrics and Marshall writes some too.

What’s been one of your favorite live shows that you’ve seen this year?
Oh gosh, hmm. I saw Grimes. Grimes was really great!

Did you see her in Minneapolis at the 7th Street?
No, actually I saw her in Paris.

How has it been with you working on both the Anonymous Choir and Dark Dark Dark? Overwhelming or just busy enough?
No it’s really great! It’s nice because when I’m home in Minneapolis I have a lot of time to work on the choir stuff and it’s like a totally different project. It really feeds me.

What are you most excited about for playing the Cedar Cultural Center on October 3 or October 5?
I love everything about The Cedar. I love the people who work there, they treat us really well. The audience is really great. They’re always up for you and playing with Mountain Man is going to be really wonderful.