Statewide property taxes payable in 2014 are expected to decline by $181 million or 2.1 percent relative to what they would have been in the absence of changes made in the 2013 tax act passed by the Legislature last May. This reduction comes before factoring in the increase the homeowners’ and renters’ property tax refunds, according to a new simulation from the non-partisan Minnesota House Research Department.

Based on standard assumptions developed by non-partisan legislative and Revenue Department staff, approximately half of increase in city Local Government Aid, County Program Aid, and other state aids and half of the reduced costs resulting from the new local government sales tax exemption will translate into property tax relief, while the remainder will go toward funding increased local government services and infrastructure.* Property taxes are still expected to go down by $181 million, even after factoring in the increase in local government spending. Final 2014 property tax information will not be available until early in 2014, after certified levies for all local governments in the state are set and reported to the Department of Revenue.

The graph below shows the percent change in projected 2014 property taxes under the new tax act relative to what they would have been under previous law for seven major classes of property based on the House Research simulation. 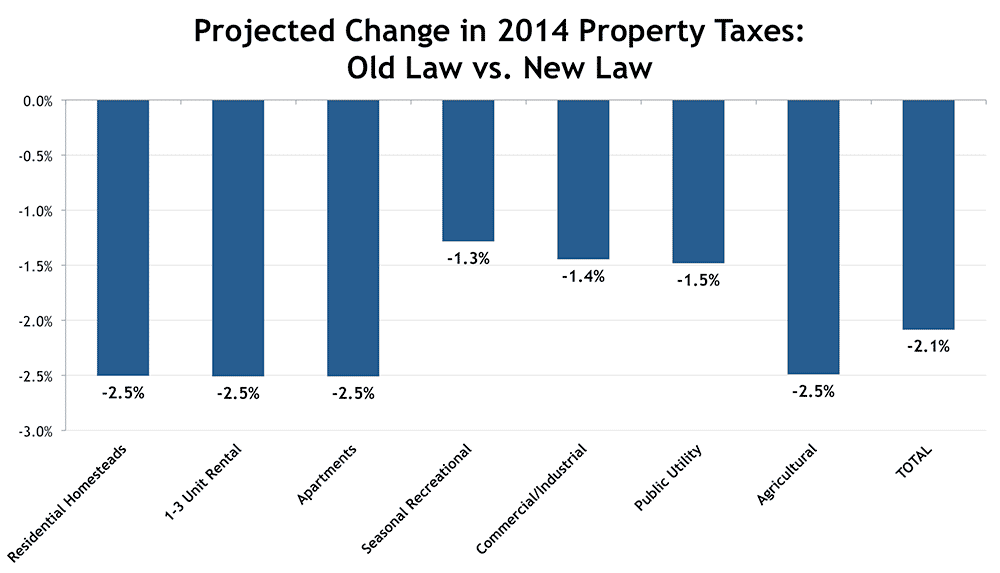 The House Research simulation also shows the change in taxes for particular regions of the state. In each of the regions examined, total property taxes are projected to decline as a result of the tax act passed last May. The graph below shows the percent change in projected 2014 residential homestead and total property taxes under the new tax act relative to what they would have been under previous law for various regions based on data from the House Research simulation. For more information on the regions referenced in this graph, click here. 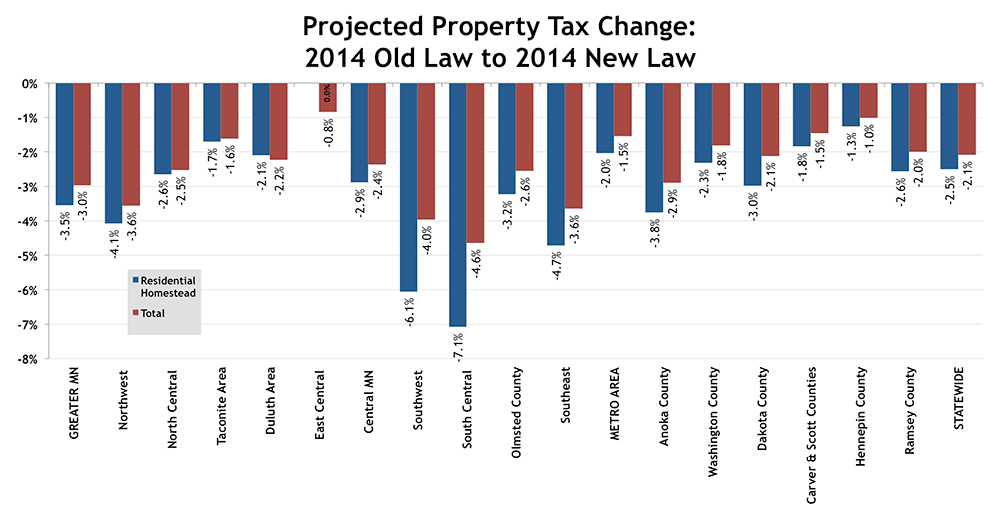 From 2013 to 2014, total statewide taxes on existing property are projected to decline by $63 million or 0.7 percent—the first year to year decline since 2001 to 2002; residential homestead property taxes alone are projected to drop by 3.1 percent. Similar reductions are expected to occur within most of the regions examined in the House Research simulation. The graph below shows the projected percent change in residential homestead and total property taxes from 2013 to 2014 for various regions. 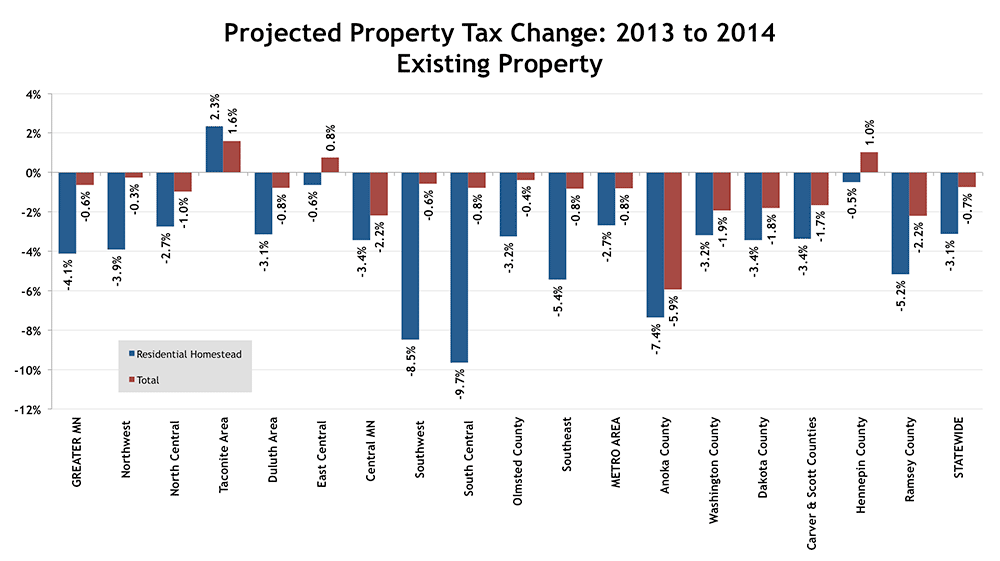 Total taxes on existing property are projected to increase in only three of the regions displayed in the above graph: the Taconite Area, East Central Minnesota, and Hennepin County. Even within these regions, the projected growth in taxes will be less than the projected rate of inflation, so that real (i.e., inflation-adjusted) property taxes decline. Among the remaining regions, total taxes are projected to decline from 0.3 percent (Northwest Minnesota) to 5.9 percent (Anoka County).

In 2013, progressive state policymakers decided to enact a progressive income tax increase rather than continuing to shift the state’s budget problems on to local taxpayers through regressive property taxes. As a result, taxes on existing property in Minnesota are projected to decline for the first time in over a decade. And this does not even factor in the property tax relief resulting from the new homestead credit refund and the increase in the renters’ property tax refund! More on this when this two part series concludes next week.

*As noted in the House Research simulation, the temporary levy limits in the 2013 tax act will also contribute to property tax reductions in some communities.