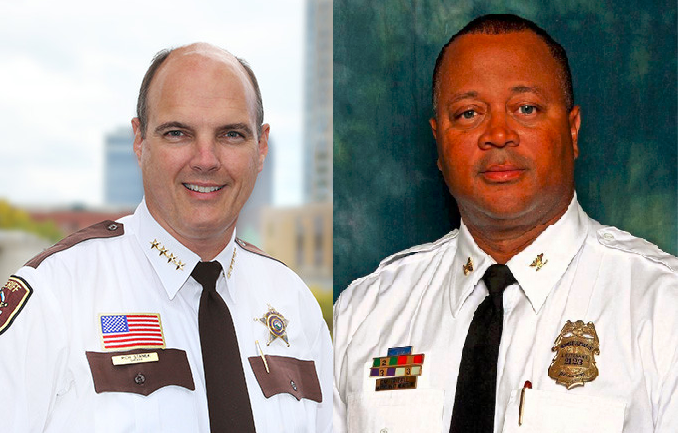 This fall NOC has been getting out the vote by engaging thousands of community members in the electoral process. Along the way we’ve seen firsthand how policing impacts our community — particularly underresourced communities of color. On November 4th Hennepin County voters have the opportunity to democratically elect a sheriff — and help shape the way our communities are governed. We asked the two candidates, incumbent Sheriff Rich Stanek and challenger Eddie Frizell, some questions to see where they stand on the issues. Here are our results in their own words.

1. Minneapolis mayor Betsy Hodges recently introduced an initiative to put body cameras on Minneapolis Police Department officers. Would you require Hennepin County deputies to wear body cameras? How would you use body cameras in policing?

Frizell: Yes. The body cameras would help to ensure that the officers are following proper protocol and that citizens are protected. It allows for both sides of the story to be told should the need arise.

Stanek: No, I don’t support body cameras and work to respect the privacy and civil liberties of all residents in the County.

2. Lately in the Twin Cities and nationwide we have seen several examples of intimidation and harassment and violence in policing of people of color, especially African-Americans, including the arrest and tasing of Chris Lollie for trespassing in a skyway; the arrest of two NOC staff for trespassing in a Cub Foods; the enforcement of outdated laws against spitting or three people standing on a corner; and threats of violence by police against community members. Local police departments have been enforcing these laws unevenly and aggressively toward people of color. As sheriff, how would you make sure deputies enforce laws evenly and respectfully?

Frizell: This is an absolute function of law enforcement. I would not tolerate anything different.

Stanek: Instances of police misconduct, racism, intimidation and harassment are disturbing and should never be tolerated. Generally speaking, we have not had these issues in the Hennepin County Sheriff’s Office due to our commitment to training and effective community engagement, as well as our commitment to providing meaningful supervision and discipline when warranted.

3. What do you believe is the appropriate role for the sheriff’s department in improving racial equity in our region? What concrete steps would you take toward better racial equity?

Frizell: It is very important for the Sheriff’s Office to reflect the community in which it serves. I would request cultural competency training and ensure active recruitment from all ethnicities and backgrounds. This has been a core principal in my campaign for Sheriff.

Stanek: Community engagement has always been a priority for me: in 2011, I formed the Sheriff’s Office Community Engagement Team to engage diverse communities, seek resident input, and build lasting and innovative partnerships –to foster trusting relationships with the people we are sworn to serve and protect. The Sheriff’s Community Engagement Team, Citizen’s Academies and Community Advisory Board have advanced the Agency’s visibility, transparency and accountability; they have become models for Sheriffs Offices across the nation. And with these efforts, the Agency has improved the diversity of its personnel since I was first elected Sheriff.

4. In the aftermath of the foreclosure crisis, public tax dollars through the sheriff’s department have often been used to evict homes for the banks only to let them sit empty and deteriorate our communities. Evictions happen regardless of whether the bank can prove a good faith effort to work with the homeowner or even prove legitimate title to the home. The Minneapolis Police Department has come up with a protocol for steps the banks must follow before the MPD will evict a foreclosed home (after a sheriff’s eviction). As sheriff, would you develop a similar protocol of additional steps for the banks before enforcing an eviction?

Frizell: Yes. As the Deputy Chief of Police with the Minneapolis Police Department, I created extra steps for my department to identify specific measures to limit foreclosures. A step I implemented was to have the banks travel to Minneapolis and present the homeowner their paperwork in person. I then required the bankers to request a citizen’s arrest so the eviction was on the bank and not the police department. What we found was that bankers were more than willing to work with homeowners to formulate a resolution rather than flying a representative to Minneapolis.

Stanek: Foreclosure and eviction can be tragic events for our families; Sheriff’s Office personnel always we do all we can to be kind and professional. Our Courts make the decisions about when foreclosure and/or eviction is an appropriate legal remedy. The Sheriff’s Office must enforce the Orders. We have protocols and best practices in place. The Banks must meet every legal requirement before any action is taken by HCSO. The individuals are afforded due process and notice – often multiple notices before any action is taken.

5. In some foreclosure cases, especially where protests are involved, the Hennepin County sheriff’s department has sent as many as 30-50 deputies to evict a home, costing taxpayers thousands of dollars. In one case, deputies dragged the homeowner’s daughter barefoot across broken glass from the shattered front door. As sheriff, how would you handle foreclosure protest situations?

Frizell: I don’t have access to current records or the actions of deputies in past events but when elected Sheriff, I will require my deputies to treat everyone with dignity, professionalism and adhere to the ordnances, statues and laws. I do respect everyone’s freedom to protest and consider it part of the process.

Stanek: I respect First Amendment rights, including the right to peacefully protest. However, I’m not in agreement with the characterizations in this question, and won’t comment on a particular case, but if protestors cross a line and violate our criminal laws, the Sheriff’s Office is mandated to enforce the law. We do so safely, according to best practices, and with the utmost respect for the individuals involved.

6. Hennepin County recently announced that it would no longer honor ICE detainers, a decision hailed by immigrants’ rights advocates as a major step forward. Ramsey County, which took the same step, has also taken additional measures to prevent deportations. Ramsey County has changed the booking process to deemphasize the question about country of origin and has a policy against booking undocumented people brought in without clear charges against them. As sheriff, would you follow Ramsey County’s lead in adopting these additional measures?

Stanek: As you have said, the Hennepin County Sheriff’s Office has led the way in implementing reforms regarding ICE detainers and advocating for those in our jail who suffer from mental illness; we work not only to respect but to protect the constitutional rights of every individual brought to our jail. We will look at and consider additional reforms.