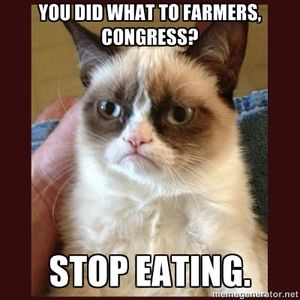 That’s a wide spectrum of ag grumpiness–although there’s no sign yet that producers are ready to tractorade to DC. Yet.

Many farm groups sought changes that would have given farmers protections, such as in the case of bad weather, while eliminating controversial direct payments to farmers.

They didn’t get them because the 2012 Farm Bill didn’t get a vote in the House–although the Senate and the House Ag Committee approved it. Instead, Davis reports that the reset button was hit, and Congress has to work up a new bill. Meanwhile, the fiscal cliff deal cut out or didn’t fund some important projects for conservation, new farmers and other pieces of the puzzle that help rural communities.

Farm policy takes a dramatic step backwards in the fiscal cliff deal brokered in Congress and soon to be signed into law by President Barack Obama. Rather than moving forward with much-needed financial and policy reform Congress and the Administration prioritized continued excessive commodity subsidies.

After expiration of the farm bill on October 1, 2012 and the inability of the U.S. House to deliver a bill for conference, pressure was on to include a farm bill extension in the ongoing fiscal cliff deal. But along with a few other plums, what ended up being the center point of the farm bill extension was continuation of the egregious commodity program known as direct payments – subsidies provided to producers with no regard for current production or market realities. The fiscal cliff deal and all agriculture policy within it was initiated by Senate Minority Leader Mitch McConnell (R-KY) and Vice President Joe Biden.

Extending direct payments was unexpected since nearly everyone in agriculture has recognized the $5 billion a year in subsidies for this commodity program as outdated and in need of reform. There is no logical explanation for the extension of direct payments other than it panders to southern commodity growers in favor with Senator McConnell.

And while wasteful commodity spending was extended, frozen out of the late-breaking deal was virtually any support for new farmers, rural development and even disaster aid; despite the worst drought gripping our country in decades.

Another major failure was the decision not to remedy a funding hang-up that will prevent farmers from using the Conservation Stewardship Program (CSP) in the coming year. CSP is aimed at supporting farmers who are maintaining and improving soil and water conservation on their active farm land. The program has been popular in the Midwest and nationally with 50 million acres now enrolled by farmers and ranchers.

To add insult to injury, Congress gave the wealthiest Americans increased exemption from estate taxes, a measure that is not only fiscally imprudent, but will serve to keep more land locked up in the hands of the heirs of large landowners and decrease new farming opportunities.

All in all family farm agriculture loses in the fiscal cliff deal – reverting to the policies of old and disregarding the growth areas in this sector of our economy.

LSP continues to be committed to advancing a farm bill and agriculture policy that provides for prosperous rural communities, a healthy environment and more, not fewer opportunities in agriculture. In the coming year we will renew efforts to demand reform and accountability to wasteful and detrimental spending while supporting new farmer and conservation provisions.

While Peterson and LSP don’t always see eye-to-eye, clearly there’s a lot of shared frustration over ag and rural America taking a back seat (or no seat at all) in Congress. When it comes to making cost-cutting elimination of programs like direct payments, the Senate and House Ag committees got that work done but had it disregarded, while far less costly but innovative programs that farmers and consumers want are cut or left without funding.

Urban readers: remember this the next time you blame Minnesota’s farmers for direct payment subsidies. That’s not what they’ve asked Peterson and Walz for in a farm bill.

And while Bluestem doesn’t agree with all the cuts the House Ag committee made in the now-moribund 2012 Farm Bill, Peterson does have a point here:

The ag committee cut $35 billion in the bill it passed, but House leaders never allowed the full body to consider. That cut was sought by top Republicans, but Peterson said other committees did not comply by finding cuts in their parts of the budget.

“The committees that were irresponsible and didn’t do their work got what they wanted, and the Agriculture Committee got screwed,” Peterson said. “It is a little hard for me to swallow.”

Hard not to be grumpy about that.