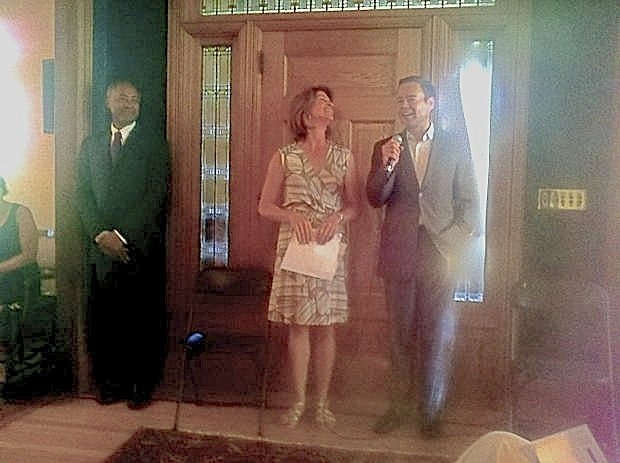 If Minneapolis City Council member Don Samuels becomes the next mayor of Minneapolis, he promises that students in his city will not be allowed to “walk like lemmings into failing classrooms.” At a casual “meet the candidate” event held Wednesday, July 17 at the southwest Minneapolis home of David and Kate Mortenson, Samuels gave a short speech about three key issues—economic development, education and public safety—but received the most interest for his views on Minneapolis schools and how to improve them.

About 70 friends and neighbors of the Mortensons, along with some interested citizens and supporters of Samuels, turned out on this sweltering July night to listen to Samuels’ ideas and ask questions about his positions. Samuels was the first of four main DFL candidates running for mayor to be invited to speak with voters at a Minneapolis home or office setting. These events were organized by Kate Mortenson, who wanted to give people who may not normally attend fundraisers a “free chance” to get an up close look at those vying to take over for RT Rybak, who is not running for re-election. Following Samuels, Mark Andrew, Jackie Cherryhomes and Betsy Hodges will be presenting themselves to these informal groups of potential supporters.

The format was a brief introduction to Ranked Choice Voting, followed by the hosts explaining the event and introducing the candidate. Then the candidate spoke on the three issues, followed by questions from the audience.

Samuels’ comments on education garnered the most questions. He gave an impassioned speech, saying at one point that the mayor “can do whatever the mayor wants to” when it comes to ensuring a quality education for all students. When pressed to give specifics, in light of the fact that the mayor has no authority over the school board, superintendent or schools, Samuels spoke of being ready to “attack anyone standing in the way of progress in our schools.” For Samuels, this would mean using his position as mayor to provide focus and leadership around education issues, as well as support for current Minneapolis Public Schools Superintendent Bernadeia Johnson and her efforts to bring structural changes to Minneapolis schools.

As a founding member of the family and education focused Northside Achievement Zone in north Minneapolis, Samuels and his wife Sondra have earned the respect of Minneapolis teacher Jude Schaaf, who listened closely to Samuels’ speech on Wednesday evening. However, Schaaf felt compelled to speak up just as Samuels was about to offer his closing thoughts.

For Schaaf, Samuels’ description of “failing” classrooms and schools was hard to take. She has worked for the past fifteen years at Minneapolis’ Broadway High School with pregnant and parenting teens and spoke instead about the myriad of issues her students face. In her experience, “none of the teachers give up” on the students they work with, including those coming to school every day reeling from the effects of trauma, stress, and poverty.  As Schaaf put it, the teachers at Broadway are constantly “developing, implementing, and assessing alternative programming to meet the unique needs of the students” they work with.

As an example of her students’ challenging circumstances, Schaaf noted that, a few years ago, a study done at Broadway High School showed that approximately 70 percent of the students were homeless or highly mobile at some point during the school year. For Schaaf, such difficult realities deeply affect these students and the teachers who work with them.

For Samuels, who identified himself as a board member at Teach for America, getting “effective teachers in low-income communities” is a priority.  A woman in attendance asked how Samuels would accomplish this given what she called the “objection of teachers’ unions.” Samuels noted that bringing the conversation “back to the children” would be his approach, and added that he is ready to “champion the best teachers” and most effective “outcomes-oriented leadership” available for the Minneapolis school system.

The next candidate to appear will be Mark Andrew, who will talk to potential voters from 5:30-7 p.m. on Wednesday, July 24 in Minneapolis.