The Uptown Apartments in Silver Lake are among 35 multifamily housing entities in rural Minnesota that have learned they are a month away from losing rental assistance funds from the U.S. Department of Agriculture.

Now it’s the other shoe dropping. Again, it lands on the poor.

Future USDA Rural Development programs, including rural housing, are threatened by the failure of the U.S. House of Representatives to pass a new multi-year farm bill. Of immediate concern, a 5 percent across the board cutback to current fiscal year expenditures – called “sequestration” – and a 2.77 percent cutback in program spending ordered in March – called “rescissions” – have taken about $65 million out of the rural housing assistance program.

Silver Lake’s Uptown Apartments complex has 16 units, said Rick Goodemann, executive director of Southwest Minnesota Housing Partnership, the Slayton-based nonprofit organization that owns and manages the complex. Of those, 12 are homes for low-income people who receive Rental Assistance (RA) help to cover the cost of what is recognized to be affordable housing.

Goodemann said federal support from USDA accounts for about 25 percent of Uptown’s total revenue. Assisted renters aren’t asked to pay more than 30 percent of their incomes for housing.

The elderly and low-income families living in Rental Assistance (RA) units won’t be put out on the street when USDA’s funds run dry in September. In letters to affected property owners and managers sent in late July, former USDA Rural Housing Service administrator Tammye Trevino spelled out steps they can take to delay debt service payments and use reserve funds set aside for maintenance to “cover short-term conditions.”

Trevino, who has since left USDA for another executive position at Housing and Urban Development (HUD) in Washington, warned property managers that retroactive payments will not be made when and if funds become available in the new fiscal year that starts in October.

The 35 affected properties contain 690 housing units, including 474 units that are supported by the RA program. 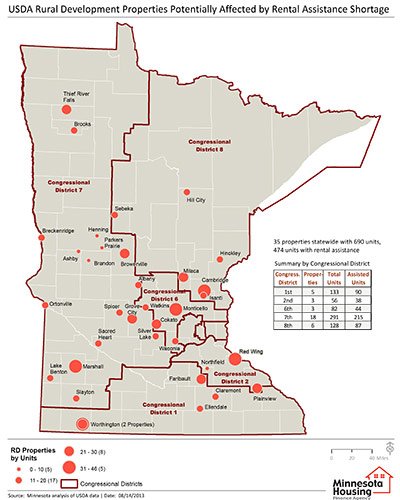 Typical of housing in rural communities, nine of the 12 Sebeka units are rented to seniors under USDA RA assistance.

Property owners and managers will absorb any initial losses, Duchesneau said, although continued cutbacks will eventually lead to some property shutdowns and even less affordable housing in rural areas. From Goodemann’s perspective in Southwest Minnesota, however, this short-term “fix” is another example of “kicking the can down the road.”

In that regard, it is similar to the ill-devised scheme Minnesota used at times in the past decade to send local school districts I.O.U.s instead of per-pupil state education aid, forcing the schools to dip into reserves and delay property maintenance.

The recently renovated property in Silver Lake is a case in point. Unless some now-unlikely turnaround comes in the House of Representatives, or an adequate “continuing resolution” is approved to continue the USDA housing programs, Uptown Apartments “will have a $12,000 operating deficit by January,” Goodemann said.

It isn’t widely understood, but statistically, there is more poverty in rural areas than in major urban centers. The national Housing Assistance Council (HAC) cites U.S. Census Bureau figures that found 15.1 percent of rural Americans were living in poverty in 2010, while the national rate was 13.2 percent.

This makes builders and investors cautious about building new single-family and multi-family housing in many rural areas. In Minnesota, the Minnesota Housing Partnership finds a rental property squeeze affecting rural and urban counties alike. Statewide, rents since the year 2000 have risen 6 percent while incomes for renters have fallen 17 percent.

“Given rental shortages, it is critically important to retain existing rental housing created with the support of federal agencies,” said Halbach. “Losing this housing resource hurts the viability of smaller communities because housing is needed to attract workers.”

As part of its economic development mission, USDA RD programs have helped communities and local organizations build and operate housing for seniors. “It also enables seniors to stay rooted in their home communities when they need to move out of hard-to-maintain homes,” Halbach said.

Sen. Amy Klobuchar and Rep. Collin Peterson will be members of a Congressional conference committee to work out final agreements on everything from farm and food aid to housing assistance and rural economic development if the House proceeds to writing a farm bill. Community groups, civic leaders, nonprofit and faith-based organizations, however, must encourage the House to work on immediate budget shortfalls.

As Minnesota rental property managers have learned, problems created by the dysfunctional House are hitting home.