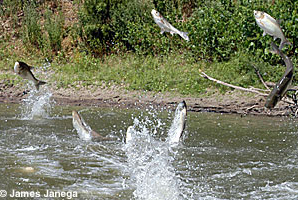 They are big, jumpy and voracious.

They’re also moving relentlessly toward Minnesota, leaving depleted ecosystems in their wake and bringing the potential to cause what one lawmaker says could be the greatest environmental disaster ever to hit the state of Minnesota.

But, while no one disputes the Asian carp are coming, implementing a strategy to stop their arrival isn’t so cut and dried, and landing on a solution will likely come down to choosing between a handful of unattractive alternatives, none of which are guaranteed to work.

That is the challenge faced by members of the House Environment and Natural Resources Policy Committee, which has already heard testimony on the matter and discussed the options at its disposal. Two primary alternatives are being considered: building a barrier to impede migration of the fish up the Mississippi River; or permanently closing one of the locks currently used to allow boat traffic up and down the river.

There are costs and/or risks associated with either alternative, but the risk of doing nothing is even greater.

“The cost is huge to the tourism business of Minnesota and the resorts, etc., the recreational industry in the state of Minnesota, it’s huge, it’s astronomical,” said Rep. Tom Hackbarth (R-Cedar), when the committee met recently. “It’s going to be in the billions of dollars down the road…We have to stop those Asian carp.”

That urgency was echoed by Steve Hirsch, the Department of Natural Resources’ director of Water and Ecological Services. “We can’t assume we have the luxury of time on this issue,” Hirsch said. The fish — which disrupt the food chain by feeding almost continuously, and can also pose a hazard to humans as they often leap from the water when startled — have already gotten past one of three locks and dams on the Mississippi where experts believe they can be stopped.

The two that remain are in Minnesota.

Permanently closing one of those Twin Cities’ locks — Lock and Dam 1 (also known as Ford Dam) and/or Upper St. Anthony Falls — may be the surest method to stop the fish from moving upstream. It is the DNR’s preferred option. Bob Meier, director of policy and government relations for the agency, described it as a “silver bullet,” but said others in the state’s executive branch aren’t as convinced. He noted concerns voiced by the Department of Transportation about the challenges a closure would present to infrastructure and shipping.

Closing a lock halts boat traffic at that point. Smaller vessels can be portaged or towed around, but barges and tour boats would no longer be able to proceed up or downriver; and that has economic consequences. Those impacts were studied by the Metropolitan Council. A report it released last July found the long-term impact of closing the lock at Upper St. Anthony Falls would “result in an annual loss of approximately 84 jobs, $5.3 million in wage income, $9.3 million in value-added and $14.4 million in economic output each year.”

However, Rep. Jean Wagenius (DFL-Mpls) pointed out the service levelof the lock was being changed based on a decline in usage. She also noted that Minneapolis was considering closing its harbor, which would eliminate another 25 percent of the traffic through the lock. With the number of vessels using it falling, Wagenius said the committee should at least consider a strategy that would render the lock obsolete; either by buying out the impacted businesses, or helping them relocate. 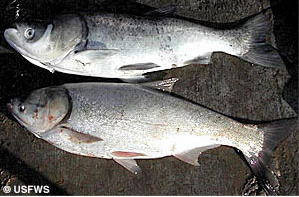 “If that lock is obsolete, Congress is going to spend money to keep it open? I don’t think so,” Wagenius said. “That is a strategy we have not taken seriously.”

That comment highlights an even more fundamental concern. Were the state to decide to close the lock tomorrow, it wouldn’t be able to do so. The Army Corps of Engineers has jurisdiction over the lock and dam system on the Mississippi. Furthermore, the United States Coast Guard also must weigh in as it regulates navigation on the river. Closing a lock requires an act of Congress.

Given the ramifications of, and obstacles to, that solution, other alternatives are necessarily being considered. If their movement can’t be physically blocked, making the fish choose not to swim upriver becomes the next best option. How best to do so is a question officials have been trying to answer for some time.

Results of a report commissioned by the DNR last year to examine the topic were shared with committee members at a January meeting. Minneapolis firm Barr Engineering conducted the study, which looked at four deterrence methods. Three involved some form of electricity, while the other used non-electric technologies such as lights, sound and a curtain of air bubbles.

The Barr report recommended an “acoustic/air bubble curtain/strobe light deterrence barrier be placed across the downstream entrance” to Lock and Dam 1, saying such a system had demonstrated between 60-99 percent effectiveness in the past. This barrier, used in conjunction with improvements being made to the dam in Coon Rapids as part of an integrated plan, “has the potential to limit the spread and impacts of Asian Carp in the Mississippi River,” the report states.

However, it also says such a system — which would cost $12 million to $19 million — “needs to be considered as an experimental demonstration project,” since using this type of barrier on a project of this size has not been tried before.

“A behavioral deterrence barrier at Lock and Dam 1 will slow the upstream movement of bigheaded carp species. This deterrence barrier, or for that matter, any other non-physical barrier, will only slow the expansion of Asian carp into the upper reaches of the Mississippi River,” the report’s authors wrote in bold print.

Those findings dismayed several members of the committee who disagreed with the report’s assessment that, despite offering a more effective deterrence method, using electricity would be pose a safety risk to humans, and would likely not be approved by the Corps in any event.

“I’m just totally dumbfounded and surprised at our complete reversal away from electricity,” Rep. Denny McNamara (R-Hastings) said. “We took this serious. We don’t want Asian carp going up the river. So our answer is to put some bubbles and do a disco at the Ford Dam? You can’t be serious.”

Hackbarth sought to clarify the use of an electric barrier by reading part of a letter DNR Commissioner Tom Landwehr received last year from the USCG in response to an inquiry he’d made about the possibility of using electric barriers. “Any proposal must be evaluated holistically, specific technology parameters may be acceptable for one configuration but not necessarily another,” he read.

Hackbarth said the Barr report was based on the electric-barrier technology available to the company, but did not examine other available technologies. “Barr Engineering did have a proposal for some electric, but far different from what other companies might suggest,” he explained.

Geoff Griffen, a former DNR engineer who’s now CEO of a company that designs electrical fish barriers, took issue with Barr’s findings, and said he was surprised the report “wiped out” the sweeping electrical barrier proposal for Lock and Dam 1 his company had submitted after studying the issue last year. Griffen said that barrier could be built for less than $5 million, would provide 100 percent protection if used at the recommended settings, and also be much safer than the system looked at by Barr.

Whether closing, electrifying, or otherwise making a lock uninviting, even a successful effort to stop Asian carp moving up the Mississippi won’t stop their spread through other Minnesota waterways. Hirsch said the Minnesota and St. Croix Rivers are “much tougher nuts to crack” when it comes to infestation, for example. Different strategies or technologies will likely be needed, and what those are is not yet clear. But solutions must be found soon.

“Since we started appropriating money, the fish keep moving,” said Rep. Rick Hansen (DFL-South St. Paul). “And they’re going to keep moving, and so at some point we’re going reach a point where there’s too many of them. We’re probably going to have to make some decisions and let the chips fall where they may.”