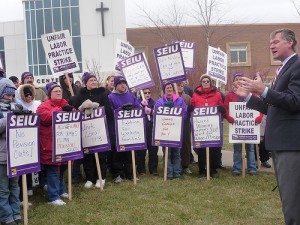 It’s election day – although you’d be hard-pressed to find much evidence of that fact. Even Joe Soucheray could be forgiven for failing to remember to vote. Minneapolis has no primary because it’s utilizing instant-runoff voting for the first time. The Minneapolis DFL is holding three events tonight to educate people on the new voting process and will conduct a gubernatorial straw poll.

In St. Paul there’s a primary election, but not much at stake. Mayor Chris Coleman faces three challengers, but only one with any credibility: Republican-backed Eva Ng.

There are also four slots on the school board up for grabs. Incumbents John Brodrick, Tom Goldstein and Elona Street-Stewart are all seeking re-election, and they’re joined by four other challengers. In addition, four candidates – Vallay Moua Varro, Quyen Nguyen, Pat Igo and Lucky Rosenbloom – are seeking to fill out the final two years left on departing board member Tom Conlon’s term.

The Ramsey County suburbs offer a little more drama. White Bear Lake initially had four candidates file for the mayoral contest, but two subsequently dropped out, eliminating the need for a primary. The Ward Four city council contest features three challengers, meaning one will be eliminated after today’s vote.

The most engaging contests are undoubtedly in Maplewood, which is notorious for its fractious politics. The mayoral race features seven challengers, including incumbent Diana Longrie. Also likely to draw some votes: former mayor Bob Cardinal, current council member Will Rossbach and former council member Marvin Koppen. That field will be winnowed down to two today.

There are eleven challengers for two city council posts. Incumbent Kathleen Jeunemann is seeking another term, while former council member Rebecca Cave is looking to return to her post. Four candidates will advance to the general election.

In Bloomington there are four challengers for an at-large spot on the city council: Ryan Gopaul, John “Stretch” Kjenstad, Karen Nordstrom and Tom Tomlinson. Nordstrom is the incumbent.