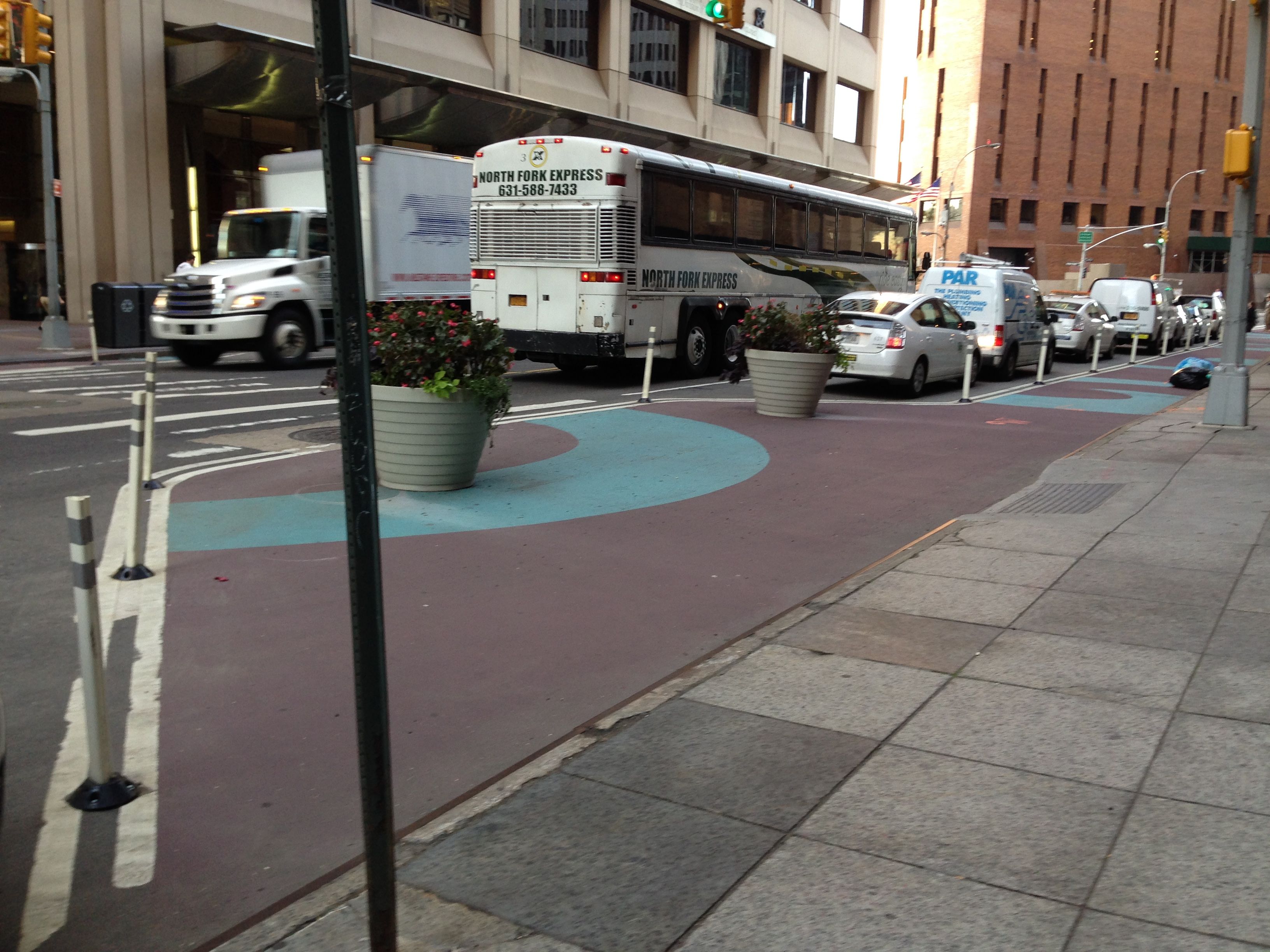 When I was in New York City a couple of weeks ago, I had the opportunity to get together with Nolan Levenson, a Macalester graduate who now works at the NYC Department of Transportation. We met near his office on Water Street in lower Manhattan to talk about ways the City of Saint Paul might apply some of New York’s successful Complete Streets implementation tools, then took a brief tour of the Wall Street area. What he showed me provided convincing evidence that it doesn’t have to take many years and a lot of money create a more walkable, bikeable, livable city, even when streets are narrow and budgets constrained.

A lot of the treatments I saw were not fancy or aesthetically pleasing, and frankly, could use a facelift, having been in place for some time. Even so, they’re still effective in making the area safer and more comfortable for walking, while retaining parking spaces and one or two lanes of traffic. Using simple, inexpensive ingredients — mainly paint, giant planters, and cheap, bendable, plastic bollards — the streets have been reconfigured by expanding sidewalks and bumpouts, creating new plazas on vacated streets, and tucking tiny parks and playgrounds into triangular spaces at intersections that used to be concrete eyesores. We first looked at some examples of expanded sidewalks and bumpouts, essentially taking what used to be the parking lane and turning it into additional areas for walking. The spaces are defined with painted edges, plastic bollards, and planters as well where space allows. The bollards are flexible to prevent damage to cars or trucks if they graze them, and generally cost about $50-100 a bollard, including the base which is screwed into the pavement. The cost of paint is minimal, but would of course vary, depending on how much of the surface is covered. Throughout lower Manhattan, the standard treatment for pedestrian areas consists of white lines and bollards along the edge, blue patterns on a reddish background within the walkway, and large planters at major crosswalks and around plazas. The cost of planters is about $300-500 apiece. All-in-all, a very cost-effective way of expanding the pedestrian realm. And although there are few bike lanes in lower Manhattan, these same treatments could be used interchangeably for improved pedestrian or bicycle improvements. It strikes me that Saint Paul could create many more miles of pedestrian- and bike-friendly streets if we were willing to try this low-cost approach. I can think of a couple of opportunities to try out this low cost approach in Saint Paul in 2015. One would be to use paint and bollards to add bicycle lanes and pedestrian improvements, such as high visibility crosswalks and corner bumpouts, to the eleven “Terrible Twenty” streets that were repaved this fall. This would first require a community process to determine priorities, which could be undertaken in the winter months. Then the City would need to identify sources of funding and develop engineering plans and schedules to complete the work, probably in the fall of 2015 (I’m an eternal optimist!) or more likely in 2016. The good news is that implementation could be done relatively quickly and inexpensively if funding was secured and enough people got behind it. Another low budget project that could be undertaken in 2015 would be to plan and stripe new protected bike lanes on three additional streets in downtown Saint Paul to complete the bike loop proposed in the Draft Saint Paul Bicycle Plan. The 8-80 Vitality Fund that was recently adopted by the City Council already sets aside $8 million to create an off-street bicycle trail on Jackson in conjunction with a full-street reconstruction. The fund also provides an additional $450,000 to plan the full loop, with temporary treatment on three legs. I’m not sure if this would be enough to complete both planning and low cost striping of one street for each of the three additional legs of the loop, but it would be great if people could have a chance to try out the whole loop and see how it works before deciding on a final alignment.

Of course, I realize there’s also the added complication of determining which streets to stripe for a test period. At the moment, two alternatives are being proposed by different constituencies for each leg — Saint Peter or Wabasha Street, Kellogg Boulevard or 4th Street, 10th Street or 11th Street. Before embarking on a longer term temporary treatment, perhaps we should try a Friendly Streets or Better Block approach, building a temporary bicycle trail on one set of streets, leaving it in place for a week, then moving it to the other set of streets for a similar period of time. Then people could vote on their preferences, and we could proceed to a more longterm temporary striping of the chosen streets. This would allow for continued evaluation of the strengths and weaknesses of each alignment through a community process, while also providing bicyclists with the opportunity to experience riding on the new bicycle trail network over a longer period of time.

Above all, my New York visit impressed on me the advantages of moving forward with quick-and-easy, low cost people-oriented improvements NOW. In addition to paint and bollards, small things like this solar-powered computer plug-in station or free wi-fi in the plaza can make a big difference in encouraging people to get out and enjoy the city. When walking and biking are safe and pleasant, when streets and plazas feel welcoming to everyone, more will use their feet and two wheels to get around. And it really doesn’t require big bucks to make substantial progress on implementing our adopted Complete Streets policy, and creating an 8-80 city that’s the most walkable, bikeable and livable city in America. Let’s get moving, Saint Paul!