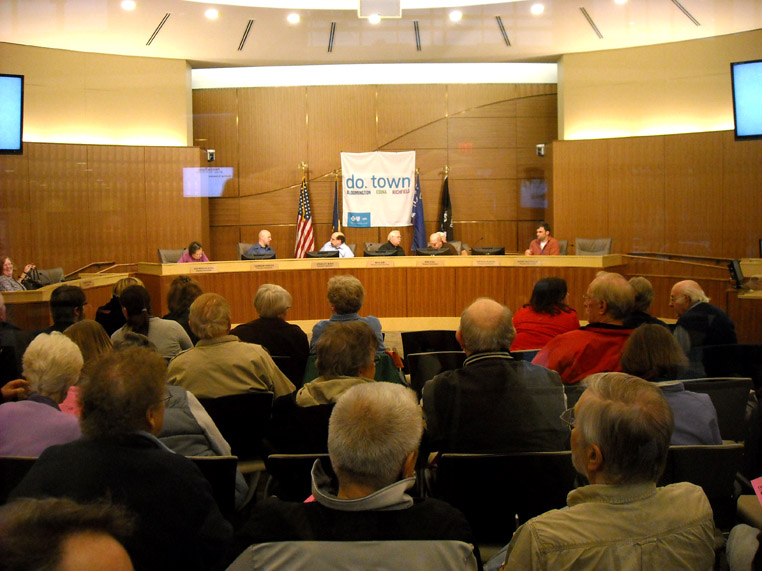 On the night of March 26, Richfield’s city planning committee looked out at yet another full house. The council chamber was so crowded that they added extra chairs outside the room. For meetings that typically deal with the approval of bylaws and city budget changes, this was no regular turnout. The sheer number of attendees was due to an ongoing feud, sparked by a proposal to build a 70-unit affordable housing apartment complex on South Pleasant Avenue by Edina-based Ron Clark Construction.

The loudest opponents have been Richfield Commoners United, who have spearheaded the opposition to the proposal made by Edina-based Ron Clark Construction. Richfield Commoners United cited a study by the Minnesota Housing Finance Agency, pointing to statements about negative impact on property values and crime rates from high density (typically above 50 units) affordable housing projects, while lower density and dispersed projects tend to have no impact.  (Their opinion on the situation can be viewed in full here.)

“Once it gets above 50 units, crime does go up and property values do decrease,” said Joseph Hoover, a member of RCU. “[If] this was medium density, mixed income, we would go away.”

Currently, in Richfield, crime rates are about 30 percent lower than they have been in the last 5 years and steadily declining.

However, the same study that RCU cited also states that, “The impact of a particular housing project depends on complex interactions between factors such as project scale, management type, and the characteristics of the neighborhood in which the project is located,” factors that Ron Clark of Ron Clark Construction emphasizes.

“I think it’s probably change and the fear of the unknown,” said Clark when asked about why there was such opposition to the proposal, “not being able to visualize or understand what it would end up like. And I think it’s certainly people casting this as just Section 8 housing and it isn’t that. It’s workforce and seniors.” While the complex would be 100 percent affordable housing, it is Section 42 housing, said Clark, “which people don’t realize can be very nice housing.”

Clark also said that proper management of a building has a lot to do with its success in the community. Steven Scott Management, who would be running the building, would subject all applying tenants to a complete background check, including criminal, income-verification and past-landlord referencing, said Clark.

Kyle Kosieracki and his wife Kristin have lived at the Carleton Artist Lofts, a 169-unit, 100 percent affordable housing apartment complex in St. Paul for six years. The two didn’t realize the apartments were Section 42 housing until they were told by the management.

Kosieracki, who is currently going to William Mitchell Law School, finds the place ideal for his current situation, as he pays less than $1,000 a month.

“There’s a lot less maintenance,” said Kosieracki, who doesn’t plan to move out any time soon.

While the Carleton Lofts are located in a high traffic area on University Avenue in Saint Paul, Kosieracki says he has never worried about the integrity of his neighbors or crime in the neighborhood.

Zack Jones, another resident of the Carleton Lofts, has also lived there for six years, occasionally with his daughter, and paints a similar picture of the complex.

“There’s been some bike thefts,” recalled Jones, who said he didn’t recall any other criminal activity in the area. “I feel like the people that live here are up and comers,” he said.

Whether the 169-unit complex in Saint Paul is comparable to the proposed 70-unit complex in Richfield is uncertain, however, it raises questions and further indicates how complicated the affordable housing scenario is.

The proposed complex would have residents with incomes in the same ballpark as the properties and residents currently surrounding it , according to the estimates of property values and median incomes by Homes.com in the area. Section 42 housing is slated for a single occupant making less than $35,280 and a family of four making less than $50,400.

In view of the heated opposition, Clark withdrew his proposal March 26, requesting an extension to revise his plans by the next city planning meeting on April 23.

“We’re trying to listen to the neighbors,” said Clark, “what are they concerned about and respond to that.”

Clark suggested that his new plan may involve the building being two stories opposed to four, to lessen a harsh visual transition between the complex and the houses surrounding it. The new plan will not reduce the unit size, however, and it will continue to be 100 percent affordable housing under Section 42 guidelines.

RCU members believe affordable housing is being disproportionately placed in Richfield — an area they already consider to be “affordable.” Many point fingers at neighborhing Edina, which they say is not welcoming affordable housing.

Ghislaine Ball, of RCU, compares Edina to a neglectful brother who keeps forgetting to pay for dinner, perpetually leaving Richfield with the tab.

Ball and Hoover have some numbers on their side. Between 1996 and 2009, Edina only met six percent of its affordable housing goal while Richfield met about 40 percent, and the trend seems to be continuing.

“The biggest factor, with respect to Richfield having a higher ‘needs’ number, is that Richfield is forecast to grow more than Edina in the decade,” wrote Bonnie Kollodge of the Met Council in an email interview. “In addition, Richfield is in closer proximity to more lower-wage jobs than is the city of Edina.”

“Richfield is a home where people can buy medium-cost housing,” said Wroge. “To pretend that we aren’t already affordable is ridiculous.” He doesn’t believe Richfield needs to take on more affordable housing and should instead focus on bringing up property values city-wide, in the way that neighboring Edina has done.

“I’m at this point where I’m getting tired when everything that comes to Richfield has to do with TIF,” said Wroge, referring to Tax Increment Financing, a broader term of redevelopment subsidization that includes affordable housing. “I think if you’re going to bring anything to the table it should have some money involved,” he continued.

So what’s the solution? It’s complicated

To many, the solution may be quite simple — deny the proposal. Let Edina deal with more affordable housing. To others, it’s not that simple.

Myron Orfield, University of Minnesota professor and Executive Director of the Institute on Race & Poverty said the situation is more complicated than simply “should they or shouldn’t they.”

“I think Richfield is a radically racially changing suburb,” said Orfield. “I think it’s a concerning place to be adding affordable housing.”

Orfield believes Richfield is right on the cusp of not meeting criteria of the Fair Housing Act, which says that affordable housing should be developed in low-poverty, high-opportunity white or stably integrated neighborhoods. The Richfield 2010 census puts non-white population at around 38 percent, which Orfield pointed out is a larger percentage than the surrounding suburbs.

“I think Richfield is really well integrated now,” said Orfield. He acknowledged that additional units could be “a step up” for Richfield in the long run.

Either way, said Orfield, Richfield is going to become more affordable no matter what they choose to do. “I think a stable integration strategy will help them with that.”

Orfield said he’s seen too many places that put in nice affordable housing that simply failed because they didn’t have a racial stability strategy. “Chicago did this on the southside,” said Orfield, “and the market rate rents went down within a year.”

He also mentioned the new affordable housing in North Minneapolis that nobody wants.

With so much changing in such a short time period, it’s hard for Richfield residents to know where to start.

His advice: educate yourselves, create a board that focuses on integration problems, and work to stop discrimination from realtors and banks — a process known as racial steering.

He also said that if Richfield doesn’t want to see a decrease in property values they need to fix their schools, which have recently gone through very rapid demographic shifts in the last decade, resulting in serious segregation in the city. (Click on pdf attachment below for more information.)

As for the argument at hand, which will most likely escalate again at the April 23 meeting, cooperation must be practiced for real progress to be made.

“Both sides have very good points,” said Orfield, “and they should talk to each other.”