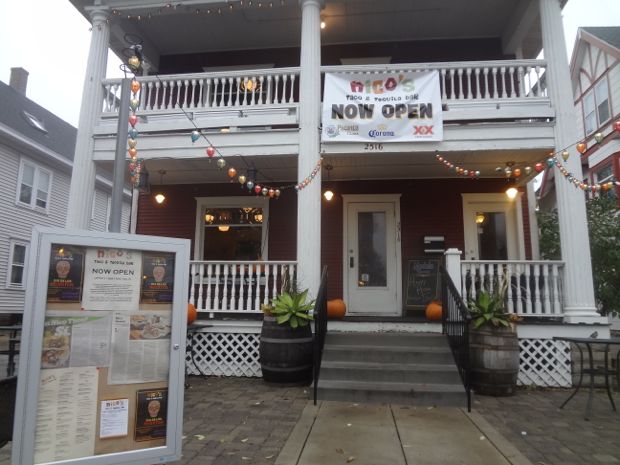 I have to admit I was pretty skeptical about the new Nico’s Taco & Tequila Bar, which recently took over the space previously occupied by Birdhouse (and before that, Duplex) at 2516 Hennepin.

Mexican restaurants can be roughly divided up into two categories — those that attract a Latino clientele, and those that don’t. For a certain kind of foodie, it just goes without saying that the places where the people of the ethnicity in question eat are more authentic, and therefore better, than the chain restaurants, or the ones that have been in some way adulterated to please the less adventuresome Midwestern palate.

So, it stands to reason that you are going to find the best Mexican cuisine at the little taquerias along Lake Street or Central Ave. in Minneapolis, or Concord St. in St. Paul.

I’ve only been to Nico’s twice, so far it doesn’t seem to be attracting a Latino clientele. It’s more of a young Uptown hipster crowd. But the dishes that I have sampled have all tasted reasonably authentic, and for the most part very tasty. Maybe that’s because they’re prepared from recipes from the family of owner Alex (Alejandro) Victoria, (who also owns Amore Victoria in Uptown). Victoria’s family comes from Michoacan in Mexico (you can find photos and more details on Nico’s Facebook page.)

There are a few dishes that I haven’t seen elsewhere locally, including a guacamole con tecino — guacamole with bacon. It’s a dish that restaurateur and cookbook author Rick Bayless, owner of the Frontera Grill in Chicago, has popularized, but I am not sure whether it’s actually known in Mexico. (Not that it matters.) You can find dishes prepared with nopales (cactus pads) on other menus around town, but I have never seen tacos con nopales elsewhere locally. Nico’s nopales tacos, topped with cactus, pinto beans, cotija cheese and chile de arbol salsa are excellent, and one of the few vegetarian options on the menu.

After my first visit to Nico’s, I went to a Lake Street Mexican restaurant that attracts a Latino clientele, just for comparison, and I was surprised to discover that Nico’s more than held its own. The fish tacos were much better, and so was the pozole, a spicy pork and hominy soup.  Actually, at the “authentic” Mexican place on Lake Street, the fish tacos where made with breaded fish sticks, which I have never seen in Mexico. The bean tostadas were a tie.

The tacos, and most of the other menu items, were more expensive at Nico’s — $3 apiece, and $4 for seafood vs. the typical $1.89 or so at the taquerias, but the ambience was also nicer, and, well, you expect higher prices in Uptown. Nico’s also offers an impressive list of tequilas and mezcals. Prices range from $7 for the least expensive blancos up to $27 for an extra anejo Asombroso Gran Reserva. The rest of the drinks list includes margaritas, cocktails, and a decent selection of tap and bottled beers and wines by the bottle or glass.