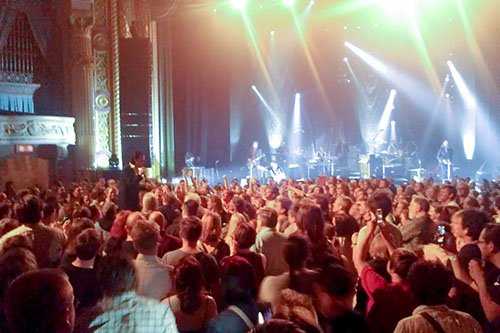 Nick Cave communes with the audience

It was 2001, September. I had tickets to see Nick Cave and the Bad Seeds at the end of the month for my birthday. Then something a little bigger than a concert happened, and air traffic into the U.S. looked (rightly) like a very bad idea. The U.S. tour was postponed. Those of us with tickets were told we could get a refund then or hold our tickets to be exchanged when the show was rescheduled. I chose to wait, though I had no idea how long it would be. As it turned out, it was a very long time indeed. Oh, it was only another six months before the rescheduled concert, but I was never notified of the new date. Being busy with my job, I didn’t stumble across the information on my own. I found out about it by reading a review in the paper the day after it occurred.

I thought about that recently, when I received the confirmation that I had press credentials to see Nick Cave and the Bad Seeds June 21, 2014 at the State Theater. It felt like righting an old (if petty) wrong.

I thought about it again when we stopped at the box office last night to pick up our tickets and no one could find them. It felt like I was destined never to see Nick Cave in concert.

Not being a believer in destiny, I contacted the publicist who had approved our press access. Once the crush of people at the box office had died down, we worked through them again. Everyone we worked with was very helpful, and the staff of the State Theatre, in particular, was incredibly good to us, but getting the right people talking to each other took time. The strains of “We No Who U R” could be heard through the theater doors as we waited. It sounded good, but it just emphasized that we were outside.

Finally, as the cheers died down and “Jubilee Street” could be heard starting up, the box office manager motioned to us. We had tickets! There would be no pictures, but we were in.

The prohibition against pictures became absurd the moment we reached our seats. Cave left the stage at the beginning of Tupelo and walked out into the crowd, stepping from armrest to armrest among the seats that no one was using. He could barely be seen for the smart phones held over everyone’s head to get grab memories.

After returning to the stage, Cave broke into a series of crowd-pleasers reworked to bring their driving rhythms to the fore. “Red Right Hand” was jazzed up from the album version, with a drum line that powered through the song. “Weeping Song” benefited from the addition of a Warren Ellis fiddle part that breathed the rhythm for us. Only “Mermaids” was hurt by its arrangement, with Cave’s piano-playing being drowned out by the other instruments, turning the end of the song into an exercise in repetition.

Then Cave hauled out more challenging material. He’s set himself a difficult task as a stage performer. Having such a wide variety of material in his repertoire means he also has a wide variety of fans. Many of the people who sang along with “Into My Arms” smiled indulgently at the stage, in that inimitable “It’s not my thing, but that’s okay” way of Minnesotans, during the wall of noise that was “From Her to Eternity.” Many of those who cheered the violence and rape of “Stagger Lee” were unsure how to handle the long, anti-pop rambling of “Higgs Boson Blues,” even though Cave sold the song as only he could.

Still, songs like “Love Letter,” “The Ship Song,” and even “Push the Sky Away,” new to many in the audience, pulled the crowd back together. You don’t go to see Nick Cave and the Bad Seeds to hear all your favorites, orchestrated as they are on the albums. You go to hear good musicians do new arrangements that highlight aspects of the songs you’ve never noticed. You go to watch and listen to a showman who promises never to sell you on his work through smooth sentimentality. You go for the rough edges.

It’s amazing that a performer as thoroughly in control of himself and his music as Cave is can continue to provide those edges after decades of serious dedication to his craft. He’s one of the few performers who can still maintain an illusion of rough, raw work without actually playing things so loose that things go badly on stage. There was one minor flub of lyrics, but no one missed a beat in bringing the song back around. Nick Cave and the Bad Seeds are a tight, professional group that have mastered keeping things raw.

That in itself is worth seeing live. Just don’t wait as long as I did.