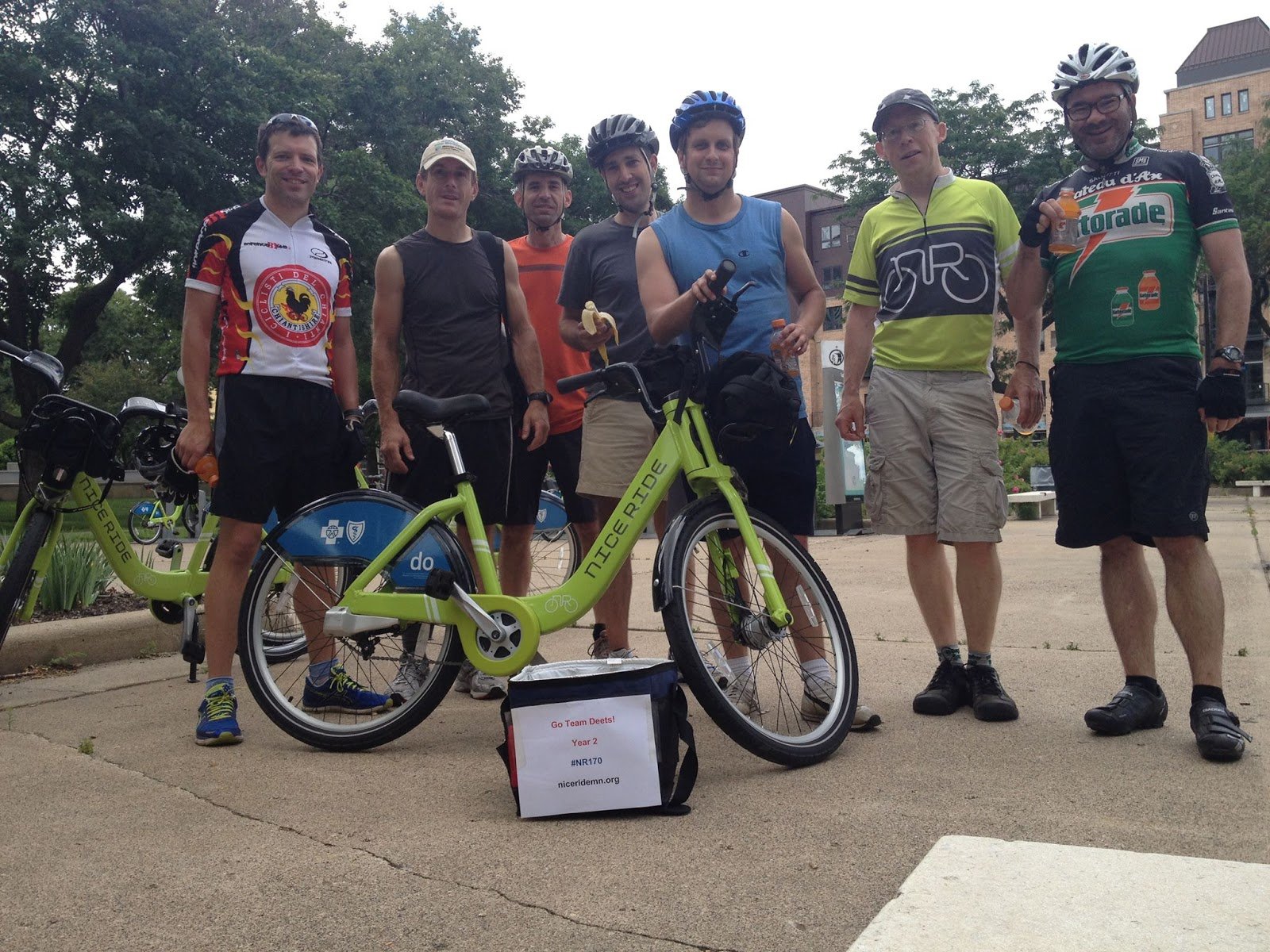 Ed Kohler of The Deets started a tradition several years ago by using Nice Ride bikes to hit every single kiosk in a single day. I wish I would have joined him for the first year, when there were only sixty-five stations that could be traversed in about three hours. In 2013, there are 170 stations spread out over 110 miles of biking–all of which, under the rules of the challenge, must be traveled using the 50-pound Nice Rides. Furthermore, a lot of the new stations are tucked away in obscure places that probably no one goes to. Like behind random buildings, or in St. Paul.

So just to see if I could do it–and in the hopes that I could find my middle-school gym teacher on Facebook and tell him I finally earned that “participation” ribbon at the 7th grade track meet, damnit–I decided to give this a shot. It didn’t go as well as I’d wished.

I started my day by remembering what the Kellogg’s cereal jingle of my youth taught me about being my best and eating a good breakfast. Eggs, hash browns, a bagel, fruit, juice, and coffee took a bit longer than anticipated, and I missed the start of the event by a few minutes. While playing catch-up to the rest of the crew, I ran into some technical difficulties. The station at Hamline University had some docking issues. The rest of the team helped each other out at the spot, but I was one or two stations behind, and still on my own. I couldn’t get my bike to register as docked, it wasn’t coming back out, and I couldn’t get my Nice Ride key fob to check out that bike or another one. I called up Ed and said I’d have to throw in the towel after fewer than five miles.

Eventually I did jiggle my trusty steed (Editor’s note: there has GOT to be a better way to word this. Go back and rephrase before publishing this post.) at that kiosk until the green light came on again and I could remove the bike. There was no way I was going to hit every station now. So I just picked a spot ahead of where the group was and met them there.

I had to cut out about ten or twelve stations in order to catch up. But I figured the calories I didn’t burn during those several miles were more than made up for by my walking between two bike kiosks and the 40-minute stream of unbridled profanities that escaped my mouth. So we’ll call it even there. 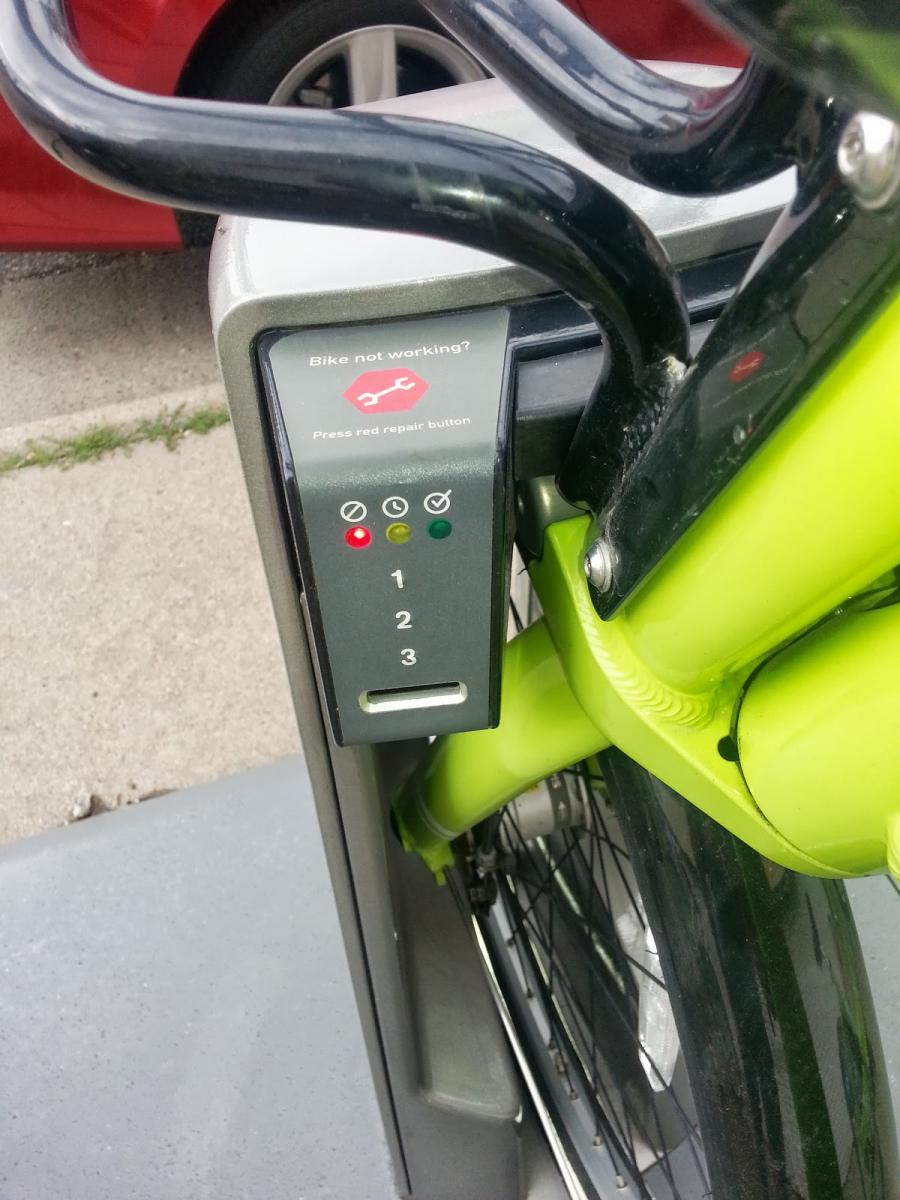 “You filthy system! I hate it! Dumb, frattin’, housnickle viper!”

When I did finally cross paths with the rest of “Team Deets,” it was clear this was a group of bikers on a whole different level than where I’m at. I mean, I can bike 15-20 miles, stop for a weightlifting session at a gym, and bike another 15-20. So I’m no slouch on two wheels. But I had nothing on this crew. They all had calf muscles roughly the shape of South America after a collective six-week arduous fitness regimen. Some of them, in spite of being men, could wear spandex and actually get away with it. They zipped along, and there was no “leave no Nice Rider behind” credo. If your bike took a while to register at a docking station, or if you stopped to tie your shoe, you could quickly find yourself a few blocks behind.

I was able to keep pace, but after a while my brain started playing “World Leader Pretend,” a 25-year-old R.E.M. song. My subconscious Spotify could have picked out an oldie-but-goodie by C+C Music Factory, or some techno by The Chemical Brothers, or at least “Eye of the Tiger.” But no, stuck on loop inside my head was an old, obscure number sung slowly in the first person about the hubris of man. This was not a good sign.

Then around the 40-mile mark (five miles more than I’ve biked in a single stretch this year) I encountered real problems. I was getting sore, but not in my legs. Oh, sure, they were tired but I still had at least 30 miles left in the tank. I’m not sure exactly how to put this, but we’re all mature adults here and I’ve already blogged about some of the untold side-effects of biking. So here goes:

I called it quits because of sore nipples.

Look, this is a real thing among long-distance bikers and marathoners. Sweat contains salt, which is corrosive. Hours and hours of friction against a loose-fitting shirt doesn’t help. And that nickel-sized part of your body doesn’t build up callouses either. It’s not uncommon for marathon runners to finish the race bleeding from that area.

So here I was, having biked over forty miles, knowing that I had another seventy to go, and thinking I could probably make it another forty at the most. I was, at the time, only a few miles from my car. At the 80-mile mark, who knows how far away I’d be? Or what shape my nipples would be in, for that matter. I mean, I really like Nice Ride, but I’m not certain we’re at that stage in our relationship just yet. Sure, we’ve been together for a long time now, but I tend to take things slow.

I don’t know what the solution is here. “Seinfeld” had the “manzier,” but that wasn’t geared towards athletic men. I don’t even know how to look for an answer. Every permutation I can think of for a Google search counts as voluntarily registering as a sex offender in at least thirteen states. Should I spring for one of that fancy-schmancy bikers’ gear? I’ve always scoffed at paying $80 for a shirt that I wear while biking, but do those prevent something like this? Furthermore, because I wasn’t wearing biking gloves, chafed palms were…boy, there’s no way to describe what was happening in an innocuous, family-friendly way, is there? This post really went downhill fast.

The rest of the crew finished at nine at night, thirteen hours after they started. If Nice Ride keeps on expanding, the next such challenge might be spread out over two days. Or an entire summer. I could handle that. I think my seventh-grade gym teacher would even give me a ribbon. 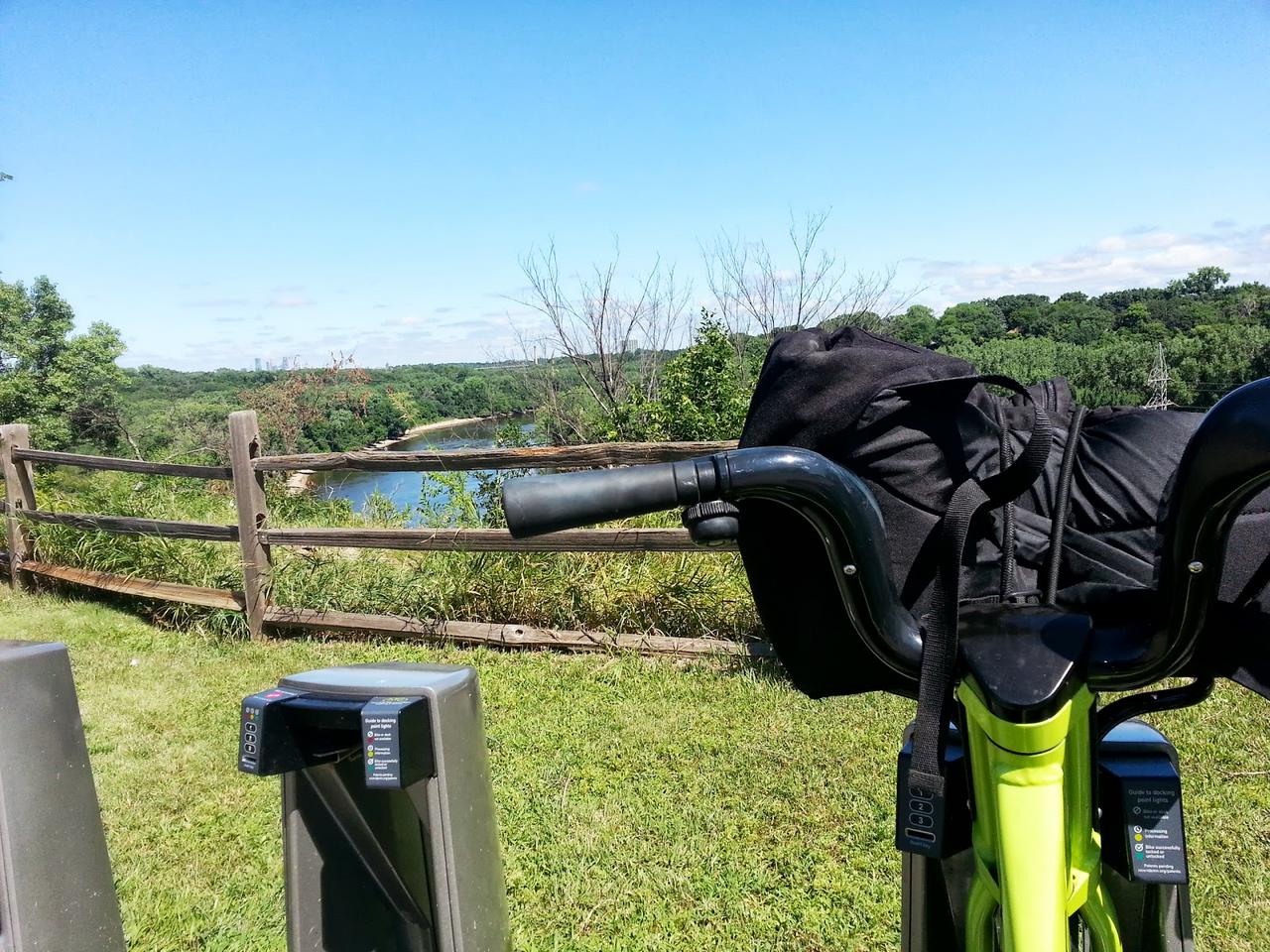