We took a little drive yesterday down the Wisconsin side of Lake Pepin, which begins just over the bridge from Red Wing, Minnesota, about an hour southeast of the Twin Cities. Inspired by Emily and Kyle’s stories of trips to the “Pizza Farm” and a nice article in the Minneapolis StarTribune by Rick Nelson, we felt it was time to take a few hours to stop and visit a few places we had previously only sped past on trips to somewhere else.

Lake Pepin is either a long lake or a wide part of the Mississippi River, depending on how you look at it. But at about 2-3 miles across and 20 miles long, it has the look and feel of a big lake surrounded by wooded hills and rocky bluffs. 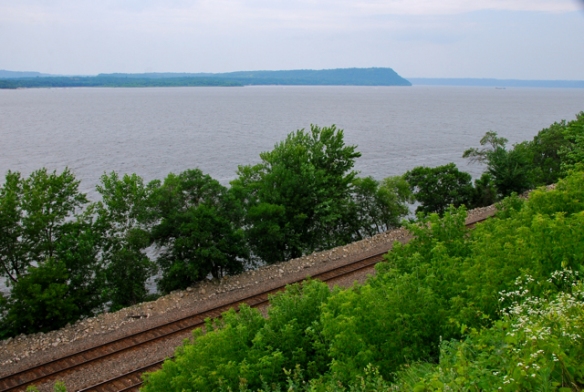 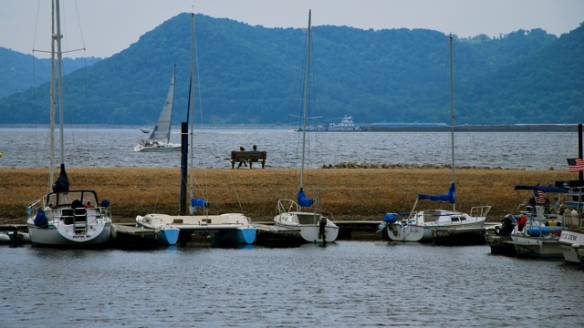 View from the marina in Pepin, Wisconsin. People on the bench watching sailboats and barges go past

The towns of Maiden Rock, Stockholm and Pepin are all cute little villages full of tourists in the summer. 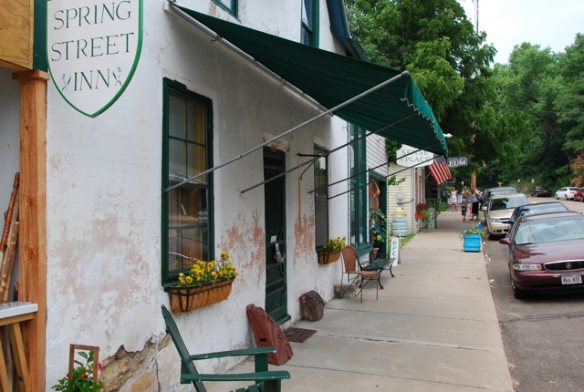 Stockholm is a tiny town with lots of charm 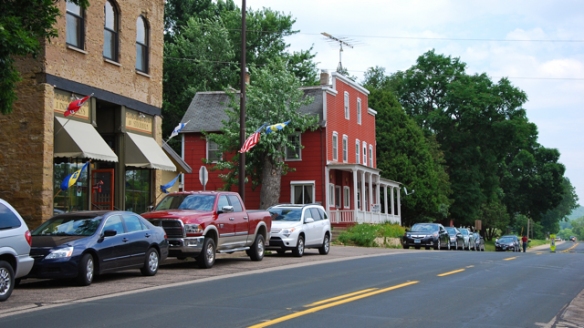 Stockholm (pop. 97 according to the sign) has some fine, old buildings

Pepin’s claim to fame is as the the birthplace of Laura Ingalls Wilder. It has a couple of hot dining spots, some gift shops, art galleries, specialty stores, and a fairly large marina. 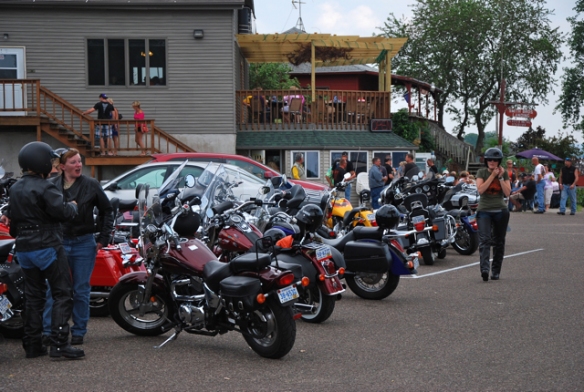 We ate at the Harbor View Cafe, a wonderful, cozy place. It’s a well-known restaurant around these parts and is always packed on summer evenings. 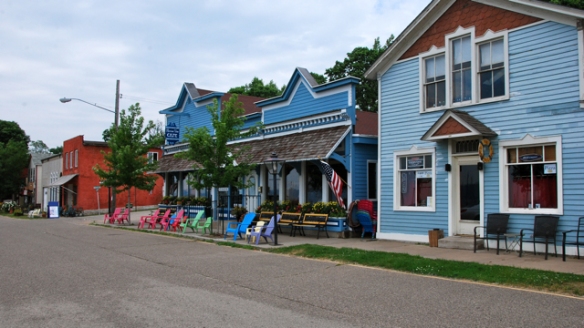 Since we were there for an early lunch, we were able to get a seat right away. Our waitress told us that not only does the menu change daily, but “with each shift”. In fact, there are no printed food menus, only the handwritten chalkboard on the wall. Don’t expect the usual burgers and sandwiches. This is the full meal deal — soup, salad, meat and potatoes and lots of fish dishes. The prices are a little above average, but it’s worth it. The food is great.

After lunch, we drove up out of the river valley at Stockholm to the Maiden Rock Winery and Cidery which we had known about from an interesting article a couple of months ago in Heavy Table. 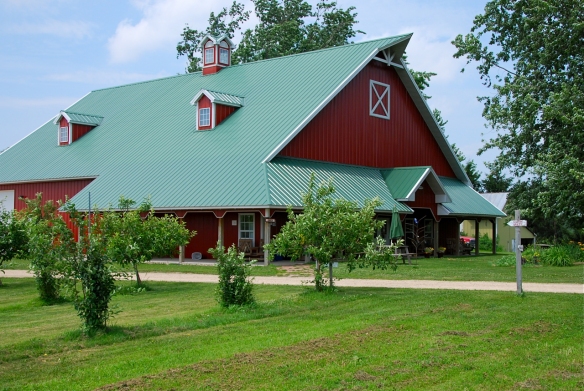 It’s a fun place to sample wine, cider and walk around among the apple trees on the orchard’s hilltop location. 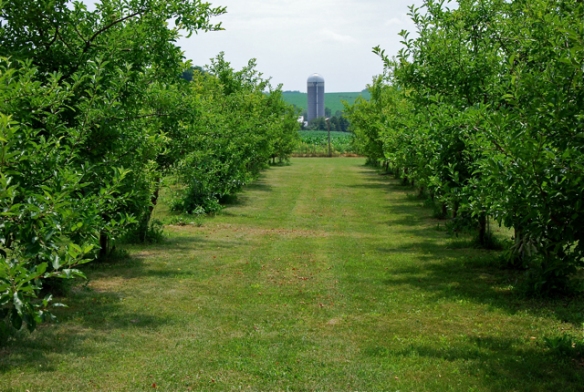 Stroll through the orchards 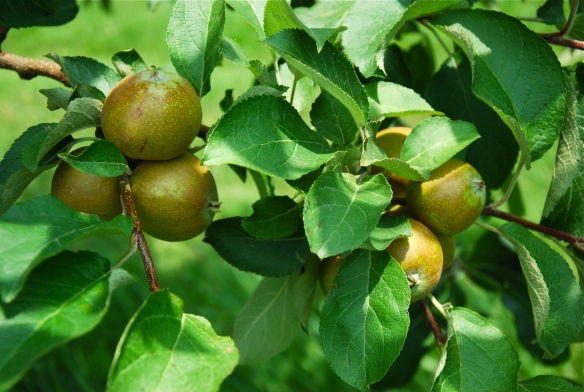 Medaille d’Or apples. Not sure how they taste, but apparently they make good cider.

We had to do one more thing before heading home. Eat pie. The only question was where to do it.

We narrowed the choices down to two: The Homemade Cafe in Pepin (great photo in StarTribune) and the Stockholm Pie Company in Stockholm have both gotten rave reviews. We settled on Stockholm, mainly because that’s where we were when we decided to eat pie. We tried the chocolate pie and the triple berry. They were both wonderful. 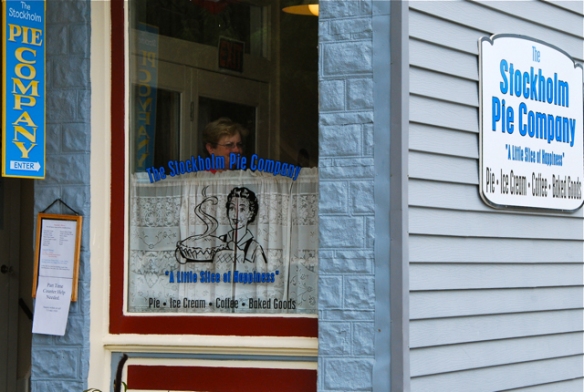 The woman who sat at the table we had just vacated looks like she doesn’t want to be photographed eating pie.

It was a very nice afternoon in some beautiful places. But the best part is that we left some stones unturned — the Pizza Farm (more about that in a future post), Amish furniture, and of course stopping in next time to see Julie and Alice at the Homemade Cafe to see how their pies measure up.

We’ll be back soon. 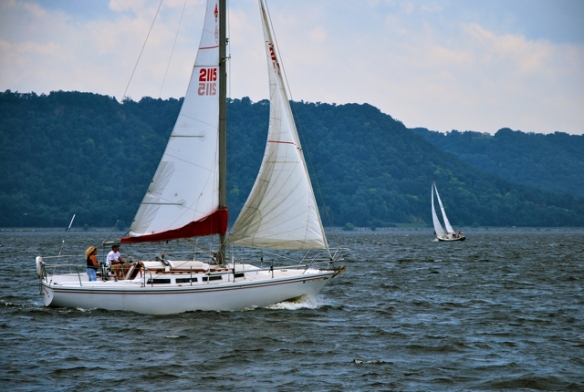