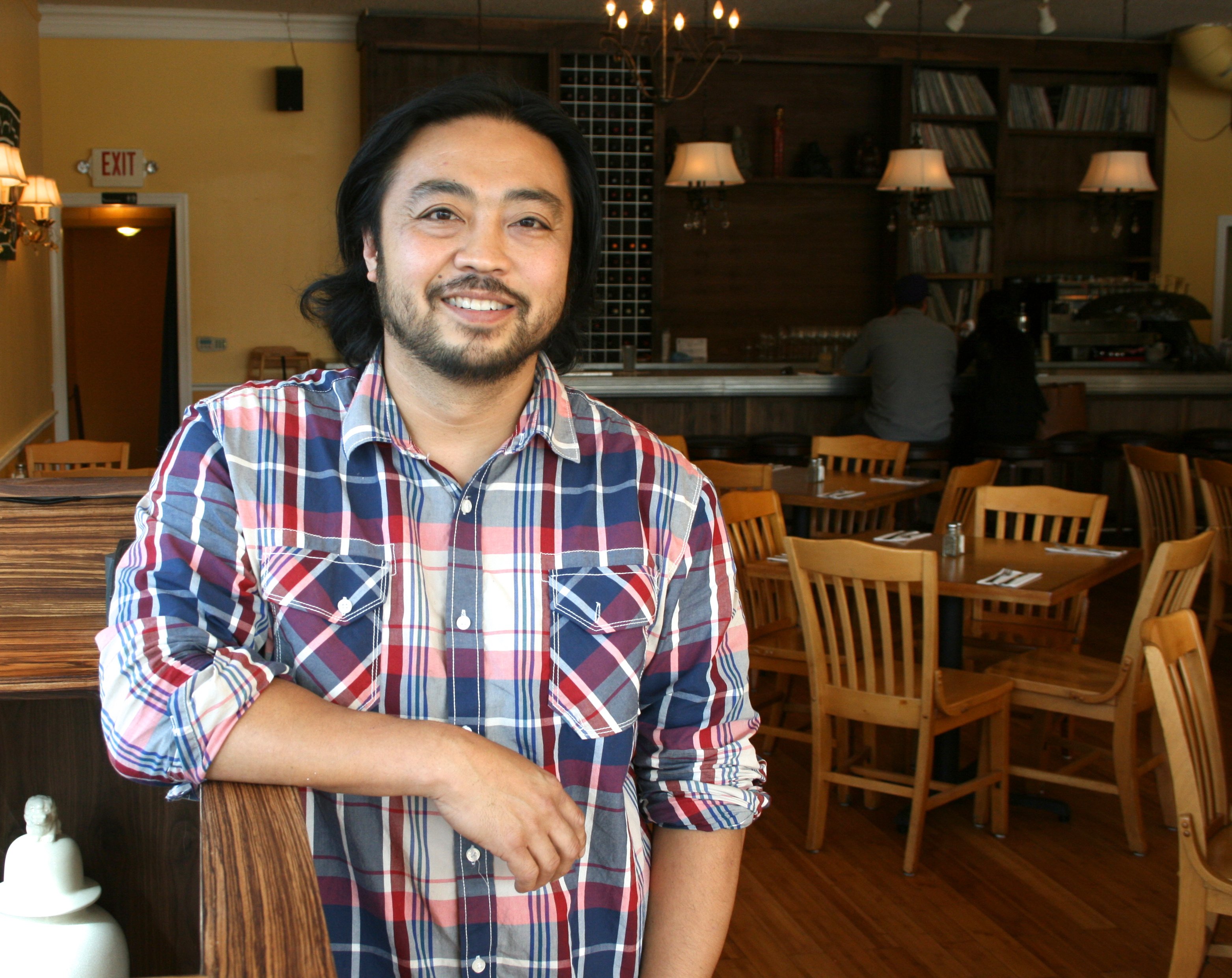 Hai Truong was born in Vietnam and came to the United States with his family at age five. That was in 1979. While the Truong family lived in various places—Minneapolis, St. Paul, Mounds View, Maplewood—Truong’s deepest connection has been to the storefront at the corner of University and Avon Aves. It’s where his father opened his first Caravelle Restaurant in 1984, and where Truong has been the chef-owner of Ngon Vietnamese Bistro since 2007.

Knowing that University Avenue would soon be served by light rail was one of Truong’s main incentives for leaving the corporate world and launching his own business. Like Mike Hatzistamoulos, owner of Best Steak House down the street, Truong planned for Central Corridor light rail construction. “When we opened the restaurant we knew that this was right for us and we knew that the light rail was going to come through.” 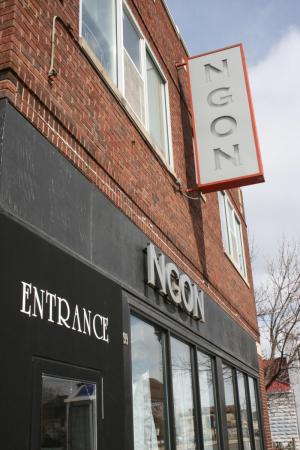 “There’s a lot of history here”

“I used to come to work here when I was little, busing tables,” Truong says. He recalls a play area in the basement with a television set. “We’d spend a lot of time here in the restaurant as kids.”

When not helping his parents at the restaurant, Truong enjoyed hanging out on University Avenue. His favorite stop was Crazy Louie’s, an army surplus store, which he describes as, “Kind of like Ax Man, but I thought it was a lot cooler.” He adds, “I was little then, so everything probably seemed cool.”

Eventually Truong’s father sold the Caravelle at that location to his sister—Truong’s aunt—and opened a handful of others, including one on Nicollet Avenue in Minneapolis, and one in Woodbury. Aunts and uncles ran each of the Caravelles.

Under his aunt’s ownership, the Caravelle on University Avenue became Pho Anh. Then, when she retired, Truong saw an opportunity to return to the family business and take it in new directions. “I wanted to get back into the restaurant industry,” he says, “And my father knew that I was looking for a restaurant.” 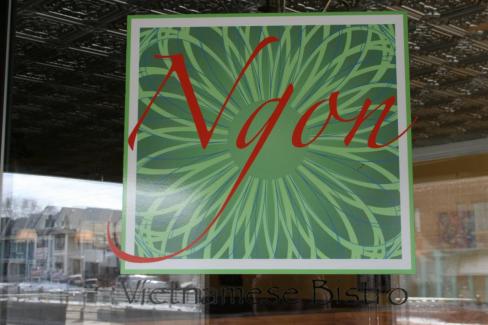 “The main thing was that we didn’t want to open a convenience restaurant, where it’s convenient for people that work in the area or who pass it by….With construction going on, people are traveling to come to us already so what if it takes a couple more turns?”

This is one thing that distinguishes Ngon from neighboring businesses that have catered primarily to a neighborhood clientele.

We wanted to…create a destination spot and customer base through word of mouth, and that helped us survive light rail very well because a lot of people made a very conscious effort to come.

At the same time, Truong is quick to point out that he is committed to the Frogtown neighborhood, where he and wife Jessica Ainsworth-Truong were living prior to opening Ngon. “I live two-and-a-half blocks away so it’s part of who we are and what we want to do and what we want to be part of.” 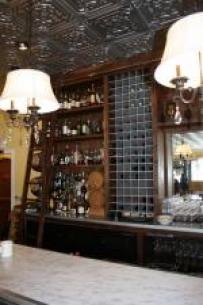 Living close by and not being captive to conventional work schedules has enabled the couple to care for their three-year-old son and maintain the kind of family life they seek. “Usually if I’m here, like right now, she’s home with our son. We’re in a situation where she teaches and I’m able to do this. And our schedule’s flexible enough where he doesn’t go to any type of daycare. And that’s what we really wanted to do.”

That Ngon is housed in the very location of his dad’s first restaurant is highly significant, too. “There’s a lot of history there.” Truong encounters customers who remember him as the little kid who bused their table.

A space and menu with flair

As a chef and restaurant owner, Truong is doing what he loves to do. He gets to be creative plus spend time with his family. “That’s why I left the finance industry, because it was putting me in a dark place that I didn’t want to be in.”

Creativity extends to such activities as building a stunning new bar. “I constructed it in my garage, my basement, and my friend’s studio.” Truong and his wife share an appreciation of aesthetics. She teaches at the Minneapolis Institute of Art, while he studied economics and art at the University of Minnesota. 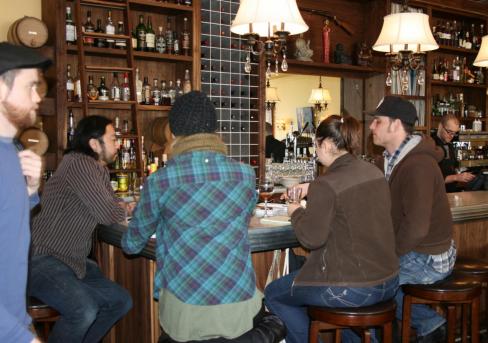 When asked what the space was like before he purchased it, Truong remarks, “Let’s just say there was one window, probably three by five. It was dark. Just think classic Chinese restaurant with red stuff.”

Giving it a total makeover was a huge joint endeavor. He credits Jessica with much of the restaurant’s transformation. “My wife teaches interior design so she designed the place and built it all up.”

What all did they do? 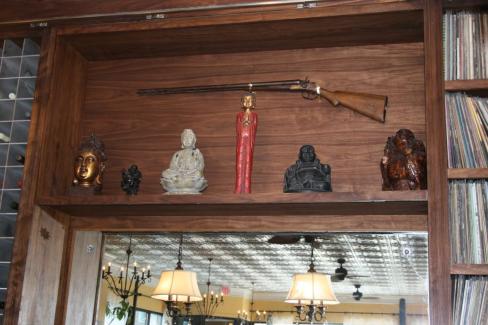 The owner’s creativity and ingenuity were also instrumental in navigating the challenges that accompanied light rail construction. “I anticipated the light rail…with a food truck to promote the restaurant during construction.” That was a project that Truong embarked on with a buddy, Atom Petchman. “He’s also my neighbor, so for summer we were working on restoring a ’67 Volkswagen bus and turning it into a food truck. And last year we headed out” to remind people about Ngon.

Along with the space, the menu is a dramatic departure from the Caravelle days. “They had more of a Chinese restaurant and with Vietnamese and also had a pho shop,” says Truong. “We’re a Vietnamese-French restaurant. We went for that flair, Vietnamese with a stronger French influence.”

While other business owners say that light rail construction is the biggest challenge they’ve faced, Ngon’s owner has found something else more daunting: customers’ mindsets and expectations about a Vietnamese or Asian restaurant.

For one thing Ngon is a scratch restaurant, so dishes take longer to prepare. Its prices may be somewhat higher as well, and for several good reasons. Ngon’s owner puts a premium on treating workers fairly and equitably. “I do staff a lot of employees and we do pay our employees well. We take care of them.” (In contrast to many independently-owned businesses along the Central Corridor, Ngon is staffed primarily by non-family members, 15 to 20 in all.) 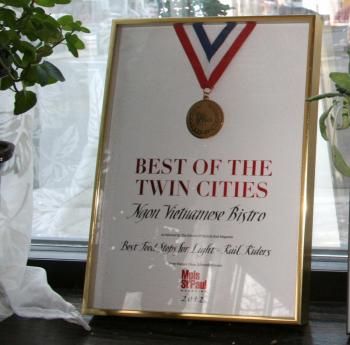 This value guides decisions about whom to do business with. “We buy from vendors that take care of their employees,” including by providing health care coverage.

Purchasing fresh, organic, local produce is part of the equation, too. “I designed the menu for the way that we eat at home…and how we like to go out to eat. We wanted more nutritious, scratch, local food, know where things come from.” This means shopping at farmer’s markets, Stone’s Throw Urban Farm, Midwest Salad Company, and purchasing from distributors with extensive local lists.

Some distributors share produce lists with Truong. He then plans menus around what’s in season. Long winters make it difficult to do this year-round, but Ngon’s owner says he is able to steer clear of factory feed lots as sources of meats. 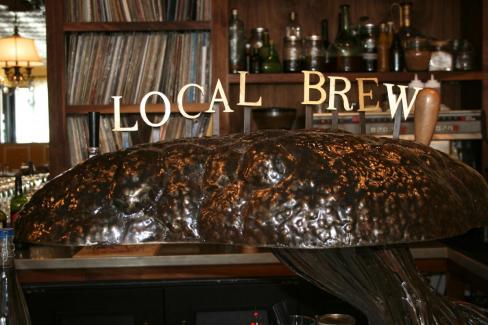 “We have enough to fill our lines with Minnesota beers, so let’s just do it. It goes to the whole concept of supporting a local economy.” As the number of local craft breweries continues to grow, Ngon is striving to keep pace. They are in the process of adding 12 more lines in order to support more local breweries.

All of these choices mean that the price of a meal may be higher than some patrons expect.

That’s something that customers have begun to understand and appreciate.

Investing in the area points to bright future

While many business owners are apprehensive about the changes taking place outside their doors—some are quite doubtful that the benefits promised will reach them—Hai Truong is pleased with what he’s seeing and optimistic about the future. 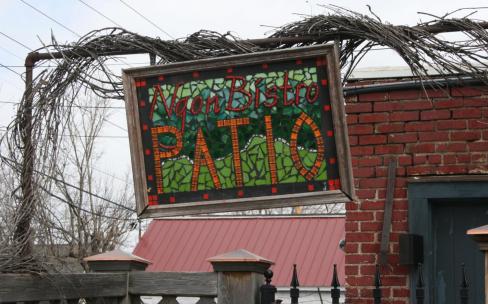 When we first started (with Caravelle) there were prostitution problems and stuff. In the ‘80s. I mean, it’s still around but it was a little worse then….I remember them correcting that, just calling the police a lot more often.

Light rail construction has resulted in deeper forms of investment along the Avenue. “When the light rail went through I was happy that they didn’t do a cheap job of it. It’s like, ‘Oh it’s going through a poor neighborhood, it doesn’t matter,’ but they’re actually using bricks, good materials, and building something to last, versus just getting it through.” All of which adds up to a more inviting environment for Ngon’s current and future customers, which means more business.

I think it’s going to be a very positive effect. It’ll be good for business. It’ll make it easier for people. People will stop here for dinner and go to the downtowns. The revitalization of the area, investments into properties are happening more and more.

As the opening of the light rail approaches, and as Ngon marked its seventh year, Truong decided it was time for some touchups. “It was time for us to like re-sand the floors, so we got the floors re-sanded, I moved the bar, put this thing in, it was a little smaller bar, and I put this thing in, that made it a lot more spacious. Just fresh color paint. So it’s just one of those things after seven years that you need to touch up.” 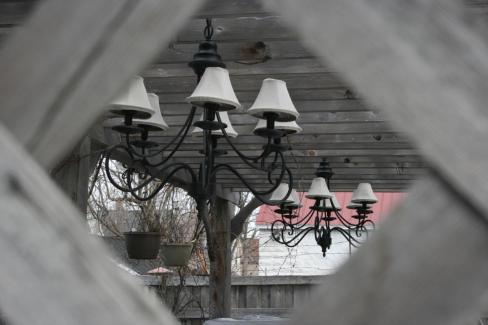 To learn more about Ngon Vietnamese Bistro and its owners listen to an audio version of the interview with Hai Truong and read the full transcript here, and watch a short video featuring Hai Truong, produced by Jose Luis Morales Alegria. Additional assistance was provided by Luce Guillen-Givins and Mary Turck.

From the website: “Ngon Bistro is a modern Vietnamese restaurant located in Frogtown. We specialize in providing French-Vietnamese food using fresh, local, and sustainable ingredients. We also have a full bar that focuses exclusively on Minnesota craft beers and a full line of craft spirits and cocktails.”