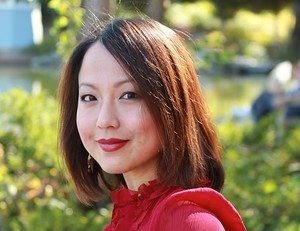 Shamanism is alive and well in the Hmong community today: a typical weekend for any Hmong person in this day and age is usually booked with family engagements. Whether it’s a spirit calling for a newly born baby, a weekend-long funeral guiding of a soul into the afterlife, or a ceremony to heal, protect, and bless a family, Hmong shamanistic engagements are commonplace. However, due increasingly to the fact that younger generation Hmong have had to assimilate into American culture, many elements of the culture have begun to diminish, including the understanding of shamanism and its very central role to Hmong culture. Furthermore, there is a severe lack of resources for the younger generation to tap into the spiritual side of their heritage. Enter Sandy’Ci Moua and Kuoa Fong Lo—two individuals willing to share their stories and help anyone who may need the support along the way.

Sandy’Ci Moua was born in Minneapolis and raised in St. Paul. By day, Sandy is an independent and successful woman. The daughter of Hauly Chong Sher Moua and Karry Moua , Sandy graduated from St. Paul Central and the University of MN. She currently works for the neighborhood association in Minneapolis’ Jordan neighborhood, in charge of outreach and communications, working for renter’s rights and developing an initiative around a free legal aid clinic. She somehow finds time to devote to community engagement with her efforts with the group Community Action Against Racism … and she’s also an actress on the side. She’s just the kind of person you wouldn’t think has this kind of a story to tell—but as she tells it, it seems she just couldn’t escape her being, her calling…her fate.

“For me, my story is kind of odd,” Sandy recounted of her unique experience. “I went through sexual violence when I was younger, which caused social anxiety, post-traumatic stress (PTSD), recurring depression, and dissociative disorder,” she explained. At the same time, her mother’s side of the family also had a history of mental illnesses—bi-polar disorder, manic depression, multiple personality disorder, and schizophrenia. “I had to be aware that, genetically, I am more predisposed through genetics,” she said.

So, when strange and different things began happening to Sandy when she was 18, she was easily confused. She would see the dark shadows known to cause sleep paralysis. She would see white, angelic spirits. She would talk to the spirits of the deceased whenever she attended a funeral and for some time, she had to avoid funerals altogether because they were so draining for her. Sandy was realistic: she knew that mental illness or PTSD were likely reasons for some of her behavior, but she also considered her culture.After all, Sandy’s maternal grandmother was a shaman, her mother’s grandfather was a shaman, her aunt is a shaman, and so are some of her younger cousins. She was experiencing symptoms with three possible logical outcomes: mental illness, PTSD … or receiving the call and emerging as a shaman.

“I had a heck of a time finding culturally relevant psychologists about Hmong culture and someone who wanted to approach healing in a holistic way. I dealt a lot with psychiatrists and therapists and was put on medications because they wanted to help me get over PTSD,” she said, “but my family said maybe I was a shaman and told me to not take medications. I progressively got worse. Both perspectives weren’t finding common ground, so I decided to follow shamanism.” Over years, as she progressed through her journey, Sandy learned to differentiate everything going on in her mind and spirit by the time she was in her early twenties. But this made her begin to wonder: if she was going through this, surely there must be other people going through the same experience as well?

If you’d like to help support The Next Wave’s Fundraiser, please donate online at http://bit.ly/FundraiserNextWaveHND2013. ‘Like’ The Next Wave on Facebook at www.facebook.com/HmongShamans. The Next Wave’s new website where we will be sharing collected resources and links: visit www.HmongShamans.org or check out their channel on Youtube at www.youtube.com/NextWaveShamans

NEXT: The next wave of Hmong shamans: Kuoa Fong Lo’s story